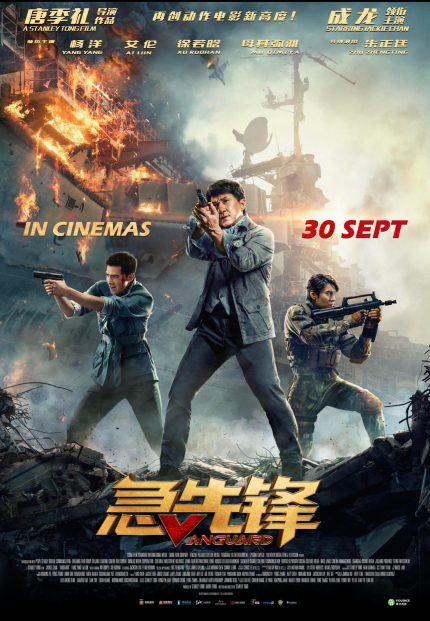 Optimistically scheduled to open in cinemas on 30 September in Asia, Vanguard sees director Stanley Tong teaming again with Jackie Chan for an action-adventure that looks like it happily walks the line between ridiculous and outrageously entertaining.

Per the official synopsis: "Vanguard is an internationally-renowned and privately-owned venture high-tech security agency founded by Tang Huanting (Jackie Chan). Their client, Qin Guoli, alerted the U.S. intelligence agencies of his boss, Massym, as the leader of an aggressive military group in the Middle East.

"Maasym is then assassinated by the U.S. government and his son, Omar, ordered to have Qin captured. Vanguard members Lei Zhenyu (Yang Yang), Zhang Haixuan (Ai Lun) and Miya (Mu Qimiya) are sent on a mission to rescue Qin and to protect his estranged daughter, an elephant conservationist, Fareeda (Xu Ruohan)."

"Assassinated by the U.S. government"?!!! No comment here, but I love the various, knowing winks to Tong and Chan's previous films together. Enjoy watching the trailer below.

Do you feel this content is inappropriate or infringes upon your rights? Click here to report it, or see our DMCA policy.
Ai LunChinaJackie ChanMu QimiyaStanley TongXu RuohanYang YangZhu Zhengting