Toronto 2020 Review: THE DISCIPLE, A Piercing Character Study Within the World of Hindustani Music 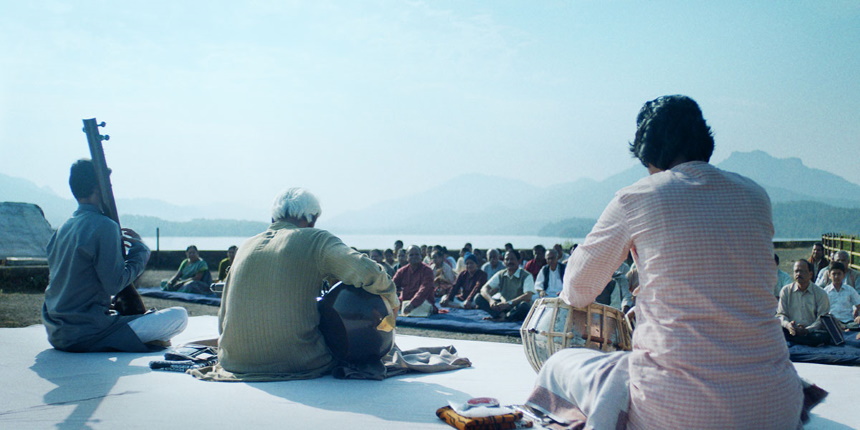 Indian classical music, also known as Hindustani music, is a unique cultural artifact that defies simple categorization. The sitar and tabla laden raga has a history hundreds of years old and remains an important touchstone and identifier for Indians around the world. It's also among the most oblique of musical forms, relying heavily on droning strings, repetitive drum beats, and improvised vocals that have little regard for traditional western notions of pitch or key.

This music exists in a world of its own, distinct from other indigenous musical forms of South Asia, or anywhere else in the world. As such, when the world moves on and other musical styles evolve, Hindustani music's appeal has grown more selective, leading to a diffusion of the form among certain quarters. But not if Sharad Nerulkar (Aditya Modak) has anything to say about it.

Chaitanya Tamhane came out of the gate hate with his 2014 debut feature Court, a cutting satire skewering the state of the Indian justice system. That film was selected by the powers that be in India as their submission for the Academy Award for Best Foreign Language film, though it sadly didn't make the short list. With The Disciple, Tamhane is back in fine form with yet another layered look at Indian society through the lens of Indian classical music and one man who aspires to master it.

The film follows the lifelong journey of Sharad Nerulkar as he attempts to make a name for himself in Hindustani music, only to find that the thing he loves most doesn't love him back. A disciple of his guru (the magnificently stoic Dr. Arun Dravid), Sharad seeks to rise to the level of his ethereal master Sindhubai, a legendary vocalist also known as Maai. Both his guru, and Sharad's own father idolized Maai, of whom no actual recordings exist, so Sharad can imagine her voice any way he chooses, but this only makes it all the more impossible for him to emulate her divine voice.

The Disciple is the story of a man seeking enlightenment and success in what is slowly becoming an arcane art form. While Hindustani musicians are still to be found in most corners of India, they are slowly getting diluted by not only folk musicians, but even more so by the increasing encroachment of fusion into pop music. Sharad faces this loss twice through the film, once when a promising classical vocalist is corrupted by fame and turns pop when discovered by an Indian TV talent show, and again when a student of his informs him that he's been invited to join a fusion band where he'll provide traditional vocals in support of an English singing front man. Ironic that Sharad's lot seems to be remaining behind the scenes or sitting beside the true talent while he watches those he sees as less talented than himself flourish by corrupting his art.

Tamhane's film deftly places Sharad in situations that have him frequently off kilter. Seeing this devotee of traditional music scrambling through tapes to try and uncover the secrets his guru's guru accidentally left behind seems almost anachronistic to the art form he cherishes. His father surreptitiously recorded some of Maai's lectures on the nature and philosophy of Hindustani music, but she never performed publicly or was ever recorded, so her talent was passed down purely through oral tradition. When Sharad corners a collector of rare recordings to try and glean whether or not he has any tapes of his mythical heroine, the collector's response doesn't align with his idealized vision and he becomes even more disillusioned than all of the times he's failed as a musician himself.

Hindustani music, and particularly the vocal element, depends heavily on micro-tones, the notes between the notes, and The Disciple does the same. Sharad is never a traditional hero, he's the side hero of a film without a hero. It's his journey we follow, but his journey's destination is ever really reached, it just goes on and on, like many who seek perfection, it's never-ending. A wholly engaging character study of an obsessed man and his connection to a music that both enraptures and antagonizes him. The more he seeks the admiration of his guru, the more admonition he receives in return, leaving him utterly without confidence, effectively relegating him to the support role, no matter how much he seems to desire to be the master.

Aditya Modak's performance is compelling and devastating as we watch him weave his way through fifteen years of his life from optimistic ingenue to deflated music teacher. Modak is, himself, a trained musician whose performances in the film are enrapturing to the audience, but disappointing to his onscreen guru. He's constantly emasculated and cut off in public, what he believes to be his most triumphant moments are ignored by those with the power to grant him recognition, and Modak plays all of this with grace. Not to mention the fact that he physically morphs from an excitable 24 year old to a pudgy, mustachioed thirty-something over the course of the film. You can see the enthusiasm drain from his face from scene to scene.

Hindustani music is as complex as it is ancient and revered, which makes it a potentially alienating subject for an international film audience. Thankfully, Tamhane understands the universal in the material and The Disciple doesn't allow itself to get bogged down in the wrong details. It's about a man with a dream who watches as the dream is slowly wrestled away from him despite his best efforts to seduce it. It's a tremendous piece of work and further evidence that Tamhane has a bright future ahead of him.