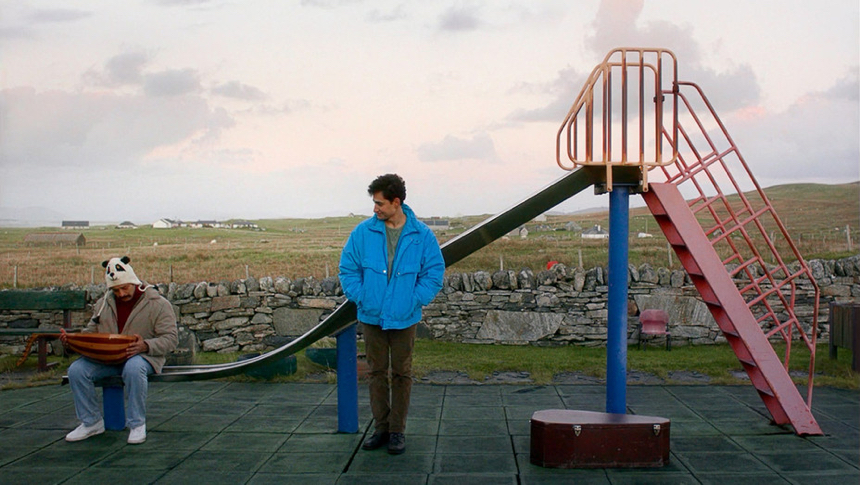 We are in a small grocery store on an isolated island off the northwest coast of Scotland. The camera smoothly glides along, past the canned goods and hardware, to the ‘spice’ section. Here it stops to reveal only salt, pepper, and a lot of empty shelf space. Omar, the Syrian asylum seeker at the heart of the film, is looking for Sumac to, spectacularly, no avail.

This is one of a hundred elegantly framed and shot vignettes that make up Ben Sharrock’s gently absurd, meticulously crafted, stylized reflection on the 21st century refugee experience, Limbo. It riotiously funny, daring given the subject matter, in its own confidently quiet fashion.

Omar and a sizeable group of Middle Eastern and North African men (only men) have been put on the Hebrides island at the onset of winter with little warm clothing. They significantly increase the overall population of the town. Quartered in a cramped cottage, they wait on the mail for their citizenship to be approved, and presumably leave for the mainland, which is of course only a bigger island. One of the men opines, “They put us out here in the middle of nowhere to break us.” He may be right, although just as likely it is bureaucratic indifference than machiavellian negligence. Even the framing of the film is a tight square, perfect for the close-up of faces, or staring into cramped quarters.

Meanwhile, they have to endure a misguided ignorance (you know, racism and all its fixins) of the some of the locals. This includes a well meaning, but bonkers, Welcome Refugees Social Program, that feels lifted directly out of the Greek New Wave as administered presumably a pair Scandanavian immigrants who have opted to settle for the isolated area. One of these is a brilliantly cast Sidse Babett Knudsen (Duke of Burgundy, Westworld S1) who runs her classroom like an experimental theatre. The other is Boris, who goes along and offers tourist-tips about the Northern Lights.

Limbo is told in a desaturated deadpan observational tone that also reminiscent of the work of Roy Andersson. Watching the Royal Mail delivery becomes an operatic affair unto itself. Communication back home is via only pay phone on the island (cellular service is a non-starter, but the scuttlebutt is that it can be tenuously had at the base of the gigantic white wind turbine at the highest, gale-driven, point on the island) which is located on a lonely cold road a long way out of town.

Here, Omar tries to justify, over a series of thunking 20p coins, to his mother why he chose to leave Syria instead of staying to fight alongside his brother (who is currently missing), and to his father why he isn’t street busking with his Oud and sending money home. The large stringed instrument is Omars only real possession, and he lugs it around like an anchor. “A musician who does not play, is dead.”

Amir El-Masry, an Egyptian actor who pops up in Hollywood productions like Star Wars: The Rise of Skywalker and Jack Ryan, is constantly on the verge of awakening from a bad dream. His handsome face and mannered body language communicate volumes without words. His performance here demonstrates that he is a movie star without question.

For much of the film, Omar’s hand is broken and in a cast (metaphor!) He cannot currently play in the short term, but it becomes obvious in the cold and wind and waiting, that he has no desire to, either way. Instead, he makes friends with the longest resident-refugee, an Afghan, Farhad (Vikash Bhai) who has a fondness for chickens, and desires to get an "Office Job," where he can wear a suit. Farhad has been waiting for more than 30 months for his letter, but he remains a optimist. In the here and now, he tries to get Omar to play his instrument, or at the very least, sing karaoke with him, in a contest where a mini-fridge is the prize at the local watering hole.

The pair make for a delight to watch, and the camera loves their warm, open (albeit downbeat) faces, even as it pans away to gaze at the endless fields of grass and howling winds. The whole construction of the film is stark contrasts (with a peppering of pop culture detritus) that is sometimes silly, sometimes sad, other times displaying a powerful reminder of the weird (and quite unexpected) avenues of the human spirit. This is not your normal refugee-crisis screed or call to action, or intimate human drama. Albeit, in its own peculiar way it these things as well. At its beating heart, this is pure marvellous cinema, sprinkled in sumac and apricots, when only salt and pepper seem possible. The climax of the film is both staggeringly obvious, and also completely worth the wait.

Do you feel this content is inappropriate or infringes upon your rights? Click here to report it, or see our DMCA policy.
Amir El-MasryAsylumBen SharrockdiscoveryGrace ChiltonKwabena AnsahLimbooudRefugeeScotlandSidse Babett KnudsenSyrianTIFF2020Vikash Bhai