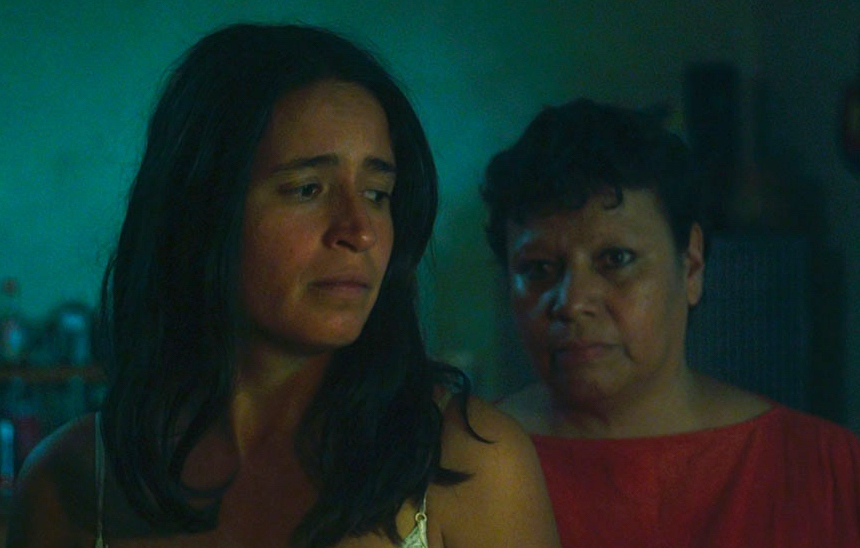 Poor Paco needs a cigarette. Badly. After arguing with his girlfriend, Flora, and fighting with Waze and Wifi they eventually arrive in the remote Mexican village of her childhood, only to find her parents not to be around. The house is tightly locked up. This is not a good start to Paco's meet-the-parents weekend. Albeit her brother shows up, and smokes his last dart, in front of the pair, whilst also offering her a bouquet of flowers.

It is a hot and dusty day, and Paco's trek to the local store on a quest for smokes yields one of the great structural comedy routines I have seen in some time. It is built around obtaining those cigarettes, and the people he has to negotiate with, and a moderately cruel universe. All the while, director Nicolás Pereda's camera looks, unblinkingly at the social contract going to hell-in-a-hand-basket. The nexus between 'politeness' and 'firm demanding' in human behaviour is at the heart of Fauna, a highly unusual narrative that yields constant, hilarious, results from its structure, framing, and admittedly, joyful (possibly cathartic) passive-aggressive chutzpah. If I struggle to be succinct it is because, cinema of conscious maladroitness, doesn't quite roll off the tongue.

This was clearly evident in the filmmaker's delightfully strange video intro to the film during its screening in the Wavelengths sidebar of the Toronto International Film Festival. A simple Iphone one-shot that seemed to ramble and fold non-sequiturs and embarrassing confessions together, but in the end, sly set up the film and its intent without letting the audience even know what he was doing. This is achieving superiority by allowing a false sense of superiority in your accomplices. Look out.

The Mexican-Canadian film (a delightful combo) is the Hong Sang-Soo joint as filtered by Quentin Dupieux that I never knew I needed. A precise dance of decorum minutiae between the actors, who are clearly having fun, and the camera - which is in on the joke, but biding its time.

Paco and Flora are actors in the big city, and they both get a scene in the film to strut their stuff in front of a willing and unwilling local audience, respectively. Their domestic life, versus their performative life, is beating heart of the movie, and works brilliant in each of the scenes they are let loose. But Fauna postulates that we are all actors, in the dramas of our own lives. We can all rise to the level of Flora's mother when she gives her 'lived-in' interpretation of a scene that Flora is auditioning for. This, pictured above, is a revelation along the lines of Naomi Watt's bright-eyed ingénue knocking a line-reading out of the universe in David Lynch's Mulholland Drive, only in reverse.

And like Lynch's masterpiece, all of these characters will be remixed to populate another narrative. Here, a novel that Flora's brother is reading. When he begins to describe the the story to his sister, after a night of heavy drinking, the film shifts gears drastically; in a way that only cinema can. Now all the familiar locations become the sordid side of small town life. All of our awkward domestic 'heroes' from the first half of the film, are now players in throes of genre 'action' involving a sinister plot, a drifter, twin sisters, and a missing local mine-worker.

But Pereda never takes his eye off the prize, and that is awkward social dynamics of family and strangers, and how any - and all behaviour - will not be 'let off the hook.' We remember, and we project.

The passive camera-work, free from much colour enhancement or obvious post-production, gives us a 'honest' look into his lies of storytelling construction. Hot and dusty rural Mexico never looked so beautiful in its banality. A daytime sequence where Flora's brother wanders, mid-hang-over, through a scrubby open field as a swarm of motorcycles drive around him on all sides, kicking up dust and surreal anxiety, will be mirrored later at night time to supreme effect. It is fun to figure out what the heck is going on, but like a good magician, things here are both endlessly surprising and comfortingly obvious.

Paco (Francisco Barreiro, Here Comes The Devil, Narcos: Mexico) is a thunderous force of nature when he is acting out a scene from Narcos in a bar to the strange delight of his future father-in-law, but he is meek as a puppy otherwise. And yet he is an abusive monster of boyfriend in the novel adaptation portion of the film. Flora flirts with her brother, while throwing her bad-girl sister, Fauna, to the wolves. Timid or not, Flora is no wallflower herself.

While the film textually (no subtext here!) critizises the cinematic violence of Mexico's social problems, like the aforementioned popular Netflix drug series, or Dennis Villeneuve's Sicario, Pereda's tight little 70-minute cinematic experiment of observation is in itself, representative of the time of wolves. You will want to smoke a cigarette afterwards.