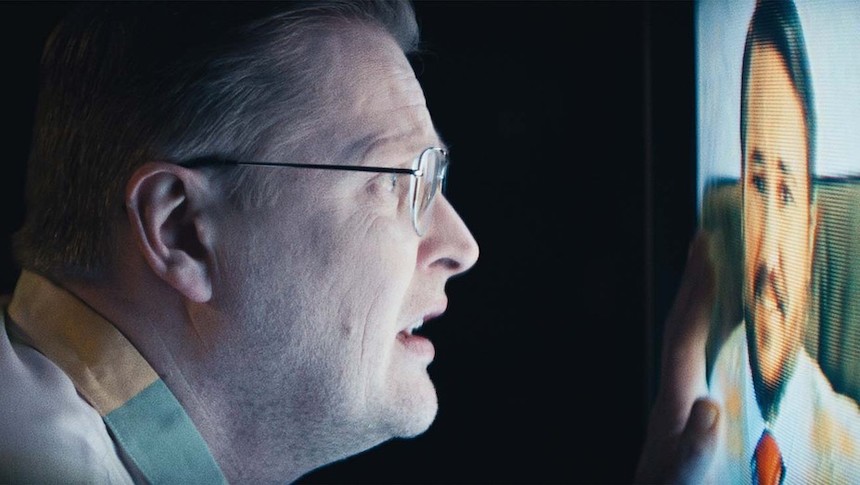 Long before the Internet Age made way for the Social Media Age, finding friends, real or virtual, took, if not always considerable effort, then at least some real-world effort, but for anyone with poor-to-middling social skills, finding and keeping friends could often turn into a self-defeating, if not outright disastrous task.

For David (Brian Landis Folkins), the central character in writer-director-producer-editor Jon Stevenson’s 1990s-set, character study-as-horror/perils-of-technology film, Rent-A-Pal, finding a friend, let alone a romantic partner to keep his abject loneliness at bay, seems all-but-impossible, a dream that gnaws at him every day and every night, eroding what little self-confidence that still remains after a lifetime of rejection, isolation, and alienation.

David’s loneliness, however, isn’t just due to the lack of social skills. He is the basement-dwelling, primary caretaker to his aging mother, Lucille (Kathleen Brady), who is suffering from dementia. Despite the selflessness inherent in devoting his life to his mother’s well-being, David’s grown frustrated with the paucity and scarcity of experiences available to him, growing in bitterness and resentment at his mother’s perpetually demanding, solipsistic behavior.

Hoping to change his life around for the marginally better, David makes a leap of faith, signing up with a video dating service, Video Rendezvous. Painfully awkward, David’s inadvertently honest videotape describing himself and what passes for his life still manages to attract a fellow caretaker, Lisa (Amy Rutledge), at least for a first and last date in person.

Frustrated with both himself and more importantly for Stevenson’s larger point, the external world, David scoops up an old VHS tape, “Rent-A-Pal,” from a bargain bin, hoping, if nothing else, for some dumb fun (escapism by another name). Instead, he “meets” Andy (Wil Wheaton, Star Trek: The Next Generation), an avuncular, preppy presence with an upbeat demeanor and a solicitous manner, except, of course, Andy isn’t real.

Or, rather, he was real in a pre-taped version of reality meant to emulate or simulate the human connection David desperately craves on a fundamental level. Through timed interactions (Andy talks, pauses while David “talks,” then responds again), David begins to see Andy less as a simulacrum of human experience than the actual, real thing. It certainly starts to look and sound like Andy has developed a mind of his own. It’s more likely, though, that David’s already tenuous grasp on reality has begun to slip, exposing a previously undiagnosed mental illness of some kind.

Before David can go put on a happy face and introduce himself to the world as a Joker-like, mother-murdering killer, though, Stevenson reintroduces Lisa into David’s life, giving David the chance, however brief, at personal happiness. But Rent-A-Pal isn’t a rom-com or even a relationship drama. It’s psychological horror. There isn’t a happy ending awaiting David, only Videodrome-inspired psychological disintegration helped along by Andy’s smiling, smirking malevolence (or the version of Andy that evolves from his grainy, VHS counterpart inside David’s fracturing mind).

It’s there that Rent-A-Pal disappointingly devolves somewhat, setting aside an intriguing, fascinating character study for full-blown horror that escapes from David’s mind and makes into the external world. Coming as it does well into Rent-A-Pal’s generous running time, it feels, if not like a cheat, then as a minor disappointment given the textured, layered storytelling that preceded it.

Given Stevenson’s character-centric approach to the story and the limited sets (mostly David’s house), Rent-A-Pal’s watchability rests almost exclusively on Brian Landis Folkins’ performance as David. Folkins gives a brutally honest, emotionally vulnerable performance. Folkins’ performance is often so raw and open that it’s bound to cause more than a few sympathetic or even empathetic cringes of self-recognition from viewers on the other side of a digital screen.

As Andy, Wheaton leans hard on a decades-old public persona that’s always seemed to straddle the border between likability and insincerity, of relatability and condescension. Once Stevenson accelerates David’s mental deterioration, Andy’s drift into destructive, manipulative behavior becomes all the more believable, all the more terrifying thanks to Wheaton’s pitch-perfect performance as the worst (imaginary) friend David could have had.

Rent-A-Pal premiered on Friday, September 11, in select theaters and on various VOD platforms, from IFC Films. Visit the official site for more information.

Do you feel this content is inappropriate or infringes upon your rights? Click here to report it, or see our DMCA policy.
Amy RutledgeBrian Landis FolkinsJon StevensonKathleen BradyUSWil Wheaton