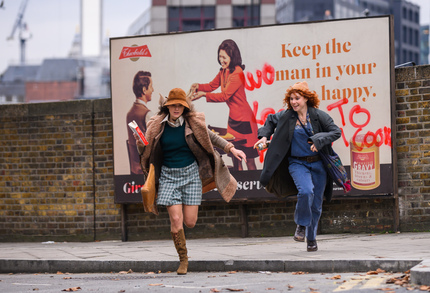 I've been thinking a lot lately (as I'm sure many people have) about what it means to fight back against oppression. Whether it be sexism, racism, ableism, homophobia, transphobia, or any other of the sadly numerous hatreds that are held not only by individuals, but imbedded into our political systems, there is a lot to fight against, and not always an obvious (or legal) way to do it, when the system is set up to ignore your rights. We often forget that this fight has been going on for a long time, and that it has often been small actions (or seemingly small ones) that have led to bigger ones, and bigger changes.

Case in point: the 1970 Miss World Pageant. Not that we don't have pageants in Canada, but they aren't as lauded as they are in the USA or other countries. And while it's always been obvious that these are contests about a woman's alleged beauty (alleged in the sense that they force conformity to a western idealized and unrealistic idea of beauty), some have tried to redeem themselves through scholarships etc. This particular pageant was a particular perfect storm of politicals, with feminists and anti-apartheid activists inadventently colliding to cause a stir. Misbehaviour, directed by Philippa Lowthorpe and written by Rebecca Frayne and Gaby Chiappe, tells this tale of the worlds of rage, activism, sexism, and beauty colliding in an entertaining and informative package.

Sally (Keira Knightley), a divorced single mother, has to fight to get a place studying history at university, but she does it; and she keeps up the fight for herself and other women, trying to change the system from within. Jo (Jessie Buckley) doesn't give a toss about the system and is far mroe anarchist in her approach to destroying the patriarchy. Meanwhile, Jennifer (Gugu Mbatha-Raw) is the first woman from Greneda to participate in the Miss World pageant, and she befriends Pearl (Loreece Harrison), a black South African woman who was flown in last-minute in an attempt to appease anti-apartheid activists.

The structure is a farily standard one, meant to introduce viewers to a story they likely don't know, about an important moment in history, and certainly it's an interesting one, given how the women's movement surged in the 1970s. All the performances are good, and we've given a good overview of second wave feminism and what it meant to those both within and without the system. We witness Sally as she tries fights to have her voice heard at university, as she fights with her mother over a 'woman's place', and as she teaches to and learns from Jo and her friends what real activism means. It's all very tidy and straightforward, according to the script. On the pageant side, Jennifer is shown as fighting not only for her rightful place as a contestant, but her rightful place as a black woman.

And that's just the problem: it's too tidy. The women's movement was messy; people within it often disagreed and didn't find a middle ground; only in one scene is Sally confronted with her very middle class, very white brand of feminism, when Jennifer tells her that, indeed, being a black woman at an event like this is, in fact, part of the movement forward in representation. Pretty much every character in the film means well, from the rebels to the pageant contestants to the pageant owners; even Bob Hope (as very well played by Greg Kinnear) and his open-secret-sexism and sexual harassment is played as a corny joke as oppose to part of the patriarchy to which all of this pageantry belongs. Mbatha-Raw shines as Jennifer, but it would have been nice to see more of her when she wasn't in pageant-mode; so many complexities about intersectional feminism (granted, not a term commonly used at the time), and the absence of Black women from feminist considerations at the time, were shoved into a single scene that didn't give it the scope it deserved.

Lowthorpe's experience in directing television serves well for a story like this, one that seeks to give viewers a crisp and straightforward overview; this is something like a television history episode, whose purpose is to introduce a topic and its historical context, then leaving it to the viewer to have mroe in-depth discussions afterwards. And no doubt the events at this Miss World pageant had a positive effect for the women's movement, as well as the individuals involved. What is lacks in depth and complexity, Misbehaviour makes up for in energy and optimism. It might be trite, but it's an enjoyable film.

Misbehaviour will be released by Shout! Studios in Canada in the USA, on VOD and in select cinemas, on September 25th.