Jules Dassin’s pair of acclaimed Film Noir classics now look and sound as remarkable as they are. 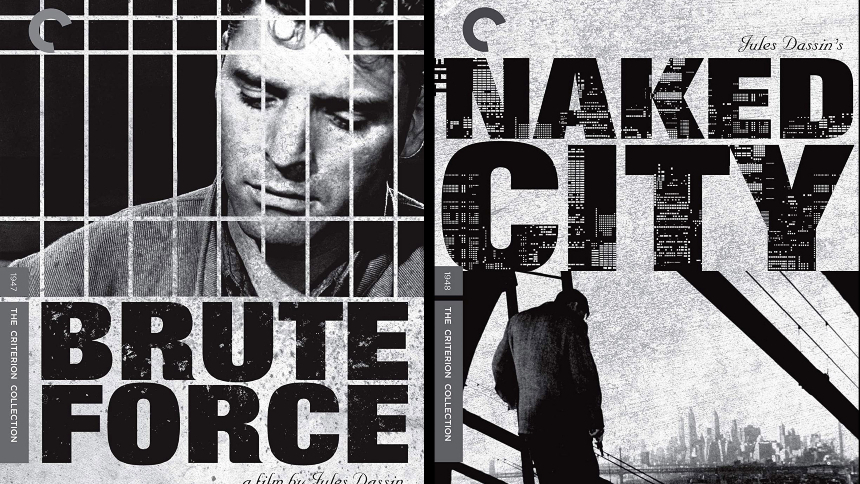 By the mid-1940s, “Film Noir” was thoroughly established stylistically, though not yet by name. Undeniably, there was a prevailing mentality rooted in postwar societal darkness, and it had permeated Hollywood studio filmmaking.

The movies’ inherent propensity for light and shadow proved a perfect medium to express the alienation and pent-up aggression that was festering on multiple fronts in a changed world. The lonely men of Noir- wandering souls, most of them, corruptible and/or hair-trigger by way of conditioning- time and time again found themselves hopelessly trapped.  Whether it was true it not, there was a collective perception that the figurative walls were closing in on the battle-scarred men of America (and beyond).

Few were as adept as bottling these tensions onto celluloid as director Jules Dassin.  In 1947 and 1948, Dassin teamed with famed columnist-turned-skilled producer Mark Hellinger to bring a back-to-back pair of hard-bitten Noir tales (to very varying degrees) to the silver screen. Respectively, Brute Force and The Naked City share little in common beyond that pedigree.

One is a tightly focused prison masterwork; the other is a sprawling look at New York City, with a murder procedural at its center. Both are brilliantly photographed by William Daniels with scores composed by Miklós Rózsa but the faces onscreen are, for the most part, not shared. Though both films have proven themselves to be influential representations of different facets of Film Noir, the former has inarguably aged much better than the latter (which, it must be said, qualifies only as a “barely-Noir”). Nevertheless, both are key in the necessary unpacking of their vital niches under the Noir umbrella.

Having undergone meticulous 4K digital restoration courtesy of TLEFilms FIlm Restoration & Preservation Services, both Brute Force and The Naked City have literally never looked and sounded better, save perhaps their opening nights.  Criterion has now reissued both in seperate editions on high-definition Blu-ray, proper showcases both for Dassin’s powerful visuals and their devoted restorations.

“Man Hate! Woman Love!”  That was a poster catch phrase for 1947’s prison film masterpiece, Brute Force (1947).  It’s apropos to specifically very little in this densely detailed and tightly wound tale, though one must concede that per Jules Dassin’s ace direction of Richard Brooks’ deft screenplay, it’s not untrue.  But, if love’s the only engine of survival, then hate is a deathly prison all its own.  And in this steel-bars-bound story, the actual prison is too oppressive in its own right.

Burt Lancaster stars in this, his second film following his explosive debut a year prior in Robert Siodmak’s The Killers (a reference that makes it into a different catchphrase from that same poster: “Mark Hellinger tells it the “Killers” way!”)  Burning up the screen straight out of the gate, Brute Force takes him straight into the big house.  Lancaster solidifies his standing as an upright leading man of scalding, quiet depth and later, sheer ferocity.  His explosion of rage and agony at the end of this film is truly a thing to behold.  Lancaster here isn’t just a presence, he is presence; hauntingly and indelibly so.

Brute Force is a prison drama with something to say.  Which is not at all uncommon when it comes to prison dramas, except that the way in which Dassin makes the film say what it has to say is something all his own.  Somehow, Brute Force is both refined and overt; authentic with hints of the artificial.  This doesn’t hurt the film; it in fact fuels it.  It fuels it with a kind of exceptional Noir-era tension- where violence reigns just beneath the surface of everything, and everything is terminally grey amid the urban and psychological confinement.  With this perhaps-greatest-of-all prison movies, the confinement is depicted as inhumane, a crushing existence that begs rethinking.  “Nobody escapes.  Nobody ever really escapes.”

Those who revere The Shawshank Redemption as the prison picture to end all prison pictures (it’s not, though it does make for a fine parable) might be taken aback by the many similarities that Stephen King and Frank Darabont no doubt derived from Brute Force.  From the prison yard vibe and aesthetic to the prominence of a gestalt-like female glamour poster adorning the key cell, one can’t help but think of the later, now-hopelessly-canonized 1994 film.

It is, however, the character of the abusive and dictatorial prison captain that solidifies any Shawshank relation.  As portrayed by Hume Cronyn, Captain Munsey is a diminutive, Napoleonic terror of simmering sadism and perverse power-mongering.  Even as he’s called out as such by the resident drunken doctor, played coyly by Art Smith, the Captain retains his calm demeanor and reptilian effeminacy.  It’s a portrayal that says a lot about masculine fears of authoritarianism circa 1947; a hateful villain that time hasn’t forgotten.

It’s the “Woman Love!” aspect of Brute Force that is its weakness.  Though a beginning-to-end tale of men toiling and plotting in a men’s prison, flashbacks open the gate, however briefly, to the various women whom were such a crucial part of their lives pre-sentencing.

The film’s posters demand pretty ladies to flaunt, and so they were appeased via the glorified cameo roles of Yvonne De Carlo, Ann Blyth, Ella Raines, and Anita Colby.  While not dealbreakers by a long shot, their inclusions are momentum killers.  And seeing how gender quotas were hardly on anyone’s agenda in a healthy way back then, these lost love interests unfortunately only stand out in their tokenism.

Of the two films considered in this dual review, Brute Force emerges as the more director-savvy effort.  It’s got a hot-button now-ness about it that is somehow likely of all times and most places.  Stocked with a most memorable ensemble (including but not limited to Charles Bickford, Sam Levene Vince Barnett, and I Walked With a Zombie’s Sir Lancelot as the all-singing inmate, “Calypso”) and driven with a less-heard brand of social outrage (remember, Dassin would soon find himself blacklisted as part of the HUAC desecration), Brute Force rightly explodes just as one of its far more accurate posters proclaims: “Human dynamite!”

The array of bonus features, some recent and some ported over from Criterion’s original DVD release, are all top-notch. Here’s the murderer’s row of Brute Force supplemental material:

• Interview from 2007 with Paul Mason, editor of Captured by the Media: Prison Discourse in Popular Culture.

• PLUS: An essay by film critic Michael Atkinson, a 1947 profile of producer Mark Hellinger, and rare correspondence between Hellinger and Production Code administrator Joseph Breen over the film’s content 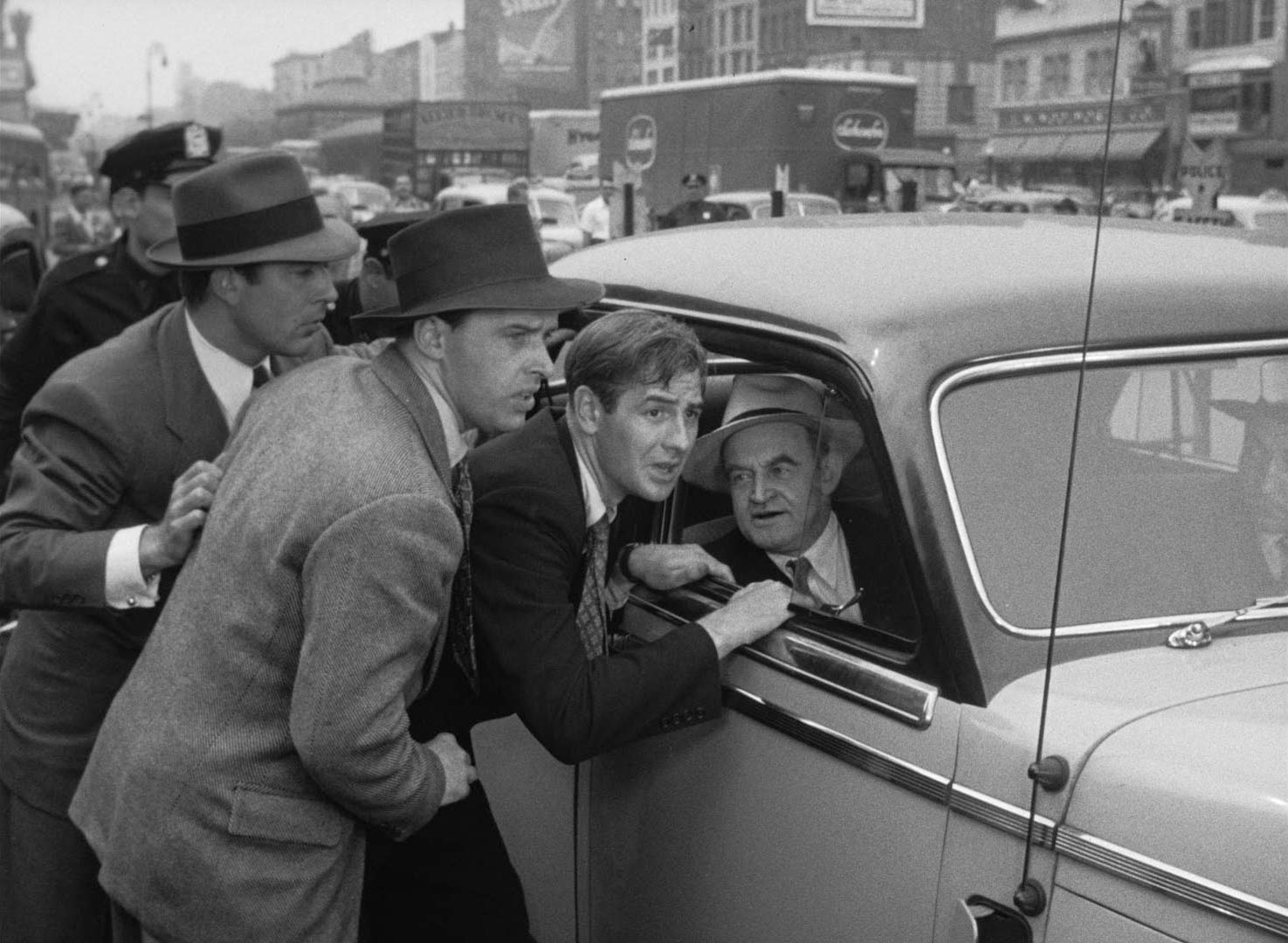 It’s not uninteresting that Hellinger (who generally receives more auteur-like credit for these films, ala Lewton or Selznick), along with Dassin, turned right around to tell a very pro-law enforcement story.  As much as Brute Force is about the systemic failings of incarceration, The Naked City (1948) could be read as a reversal in terms of ideology, cheering on the police officers that work so hard to put criminals behind bars.  The film is very much a police procedural; a tremendous steppingstone in establishing the path to such institutions as Law & Order and CSI.

Crucially, much of it was shot on the functional streets of New York City- a prominent selling point that was fully justified in both its rarity and its you-are-there immersion.  The Naked City was not the very first film to have NYC depict itself (see 1945’s even more procedural The House on 92nd Street for a valid precursor), though it was among the first.  It was also the boldest and most expansive about it.

People, people everywhere, bustling about their own lives and concerns.  When we’re famously told that there are eight million stories in the naked city, we might be inclined to reply, “That’s it?”

Mark Pellinger, sadly not long for this world on the heels of this production, actually provides voiceover narration (as well as verbal opening credits) for the duration of the film.  As a narrator he gets the job done, coming across as a warm and knowing presence, if also sometimes cynical by nature.  But, as any screenwriter knows to ask, is this narration really necessary?  No.  No, it is not.  While the copy most certainly avoids the pitfalls of the Dragnet-style all-business male dictation, there is nonetheless a lot of it.

In the lead as the sturdily affable police Lieutenant Dan Muldoon is Barry Fitzgerald.  Irish to the core and turtle-like in stature and presence, Fitzgerald is a far cry from Burt Lancaster.  Future subpar director Don Taylor plays everyman Detective Jimmy Halloran, a quality performance that makes one wish he’d stuck to acting.  All in all, they do their part to set the stage for the well-regarded 138-episode TV series that derived from this movie.  Their work cemented The Naked City as the cultural touchstone that it ended up being.

The Naked City very much gets by on its now-vintage street-realism and the engaging clip at which it moves.  Really though, it’s a murder mystery.  Or more to the point, a murder investigation.  And even more to the point, a compelling time capsule.  In this, The Naked City is an unabashed landmark; one worthy of the terrific attention paid to it by Criterion.  Here are the formidable bonus features included on the disc:

• Footage of director Jules Dassin from a 2004 appearance at the Los Angeles County Museum of Art.

• PLUS: An essay by author and critic Luc Sante and production notes from producer Mark Hellinger to Dassin.

When I earlier employed the term “meticulous” to describe the individual restorations undertaken by TLEFilms FIlm Restoration & Preservation Services, it wasn’t hyperbole.  Both films begin with not one but two text screens that detail the extensive processes utilized in getting Brute Force and The Naked City to the amazingly pristine presentations that follow.

Yet, it’s fair to question the inclusion of these graphics, which are now forced additions to the movies proper.  Unlike many such info-screens that precede older films, there are no defects or missing portions that need explaining.  The two screens consist of agonizingly small type in what amounts to the most technical of info-dumps.  This braggadocio, however, is certainly not unearned.  Let it be reiterated that both films do look remarkable.

Another minor beef that Criterion devotees have voiced over the years is the numeric separation of the films’ spine numbers (380 and 383).  It will sound humorously petty for those who don’t display their Criterions by spine number, but for those of us that do, the annoyance is real!

It’s particularly heightened when one considers the lengths the label went to in branding Brute Force and The Naked City with handsomely matching, complimentary artwork.  Alas, this Hellinger/Dassin pair, tethered in pedigree and production history, are as separated on collectors’ shelves just as they are separated in terms of subject matter and contemporary relevance.

But, in the broader scheme of things, these are fantastic editions of two very different yet considerably important Noir titles.  Film buffs should know that, just as they know this: there are over 800 stories in the Criterion collection.  These are two of them.