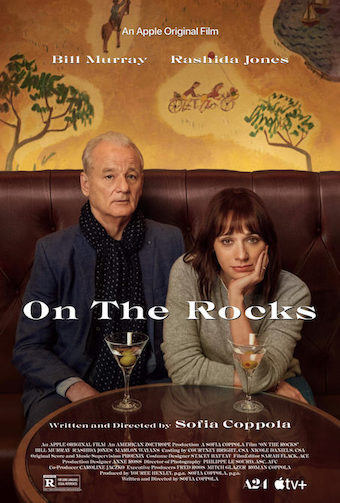 Sofia Coppola’s films are imbued with a bratty strained independent punk rock aesthetic that often riffs on generic genres and themes with a strong focus on characters that refuse to conform. On The Rocks is a distant memory of this signature style; buttoned-down and formalized, hidden under layers of family and trust issues. It is a blasé and inoffensive effort that takes some time to accommodate its distant characters and set up the literal hi-jinx that breaks the mould, the movie is classified as Adventure after-all.

Modern day New York is the setting for a different kind of ‘lost’, less in translation and more in thirty-something malaise; a quiet breakdown of generational and filial angst amidst potential partner unfaithfulness. This low investment drama and the central relationship is exacerbated by key scenes of exhausted deadpan between daughter Laura (Rashida Jones) and semi-estranged father Felix (Bill Murray) that occasionally morphs into a wacky adventure-comedy.

Suffering from writer's block Laura becomes both bored and tired by her daily grind as a busy mother. Her partner Dean (Marlon Wayans) is often away on business trips, late night clubbing, and midnight drinks with workmate Fiona and clients. She comes across evidence that leads to suspicions of infidelity. Slap-dash exposition from unmemorable side characters and convenient discoveries like this weaken the script and initially the film is unengaging, perhaps intentionally so because of it. Flat characters such as Dean and Vanessa (Jenny Slate) are under utilised, particularly compared to the central kinship.

Bill Murray brings a quirky warmness to the patriarchal role, when the film finally introduces him, it is for a liquid lunch with Laura. Felix is old money, arriving in a chauffeured car to whisk his daughter away from her concerns. When she finally reveals to him what she suspects, he immediately and excitedly hatches a plan, hires Private Investigators and convinces Laura with his natural charisma that he will help determine if Dean is dishonest.

This process unearths their family past and gets Laura out of her introverted non-confrontational shell. She scorns her father’s cockiness, and watches shocked as he sweet talks his way out of police arrest and relative shamelessness. Behind his waiter flirting and brilliantly hilarious one-liners is a past scar obscured by modern day ennui and his own misplaced confidence. Yet Felix comparatively feels more alive than anyone else, his values, openness and wisdom cleverly contrasted to the potential toxic side-effects of his generational privilege.

This is a story of growth and progression that beautifully highlights Manhattan throughout. Classy restaurants and penthouse apartments are sumptuous, yet briefly presented, classic cars and dapper fashion in the town in New York City also sell the vibe. On The Rocks can safely enter the canon of films that are a love letter to the urban sprawl albeit with a wealth class-based slant. Although very cleanly presented, the isolation and individuality is expressed in the environment. Unlike the conformity, weirdness and density of Tokyo, stilted and static camera work quietly focuses on amber-lit dinner tables, shadowy fancy bars, and austere clinical apartments of upper New york. Constant collaborator Phoenix provides the minimalist soundtrack, Sofia Coppola has dissapointingly ditched using vocal tracks that express the moment.

On The Rocks concludes with a few small surprises but not much fanfare, this is a smaller more intimate film that crosses familial dramady with wacky amateur detective stuff that basically works, but is one of the least compelling films in Sofia Coppola’s oeuvre.

On The Rocks is playing at the New York Film Festival and will premiere on Apple TV+ and In select cinemas from October 2.