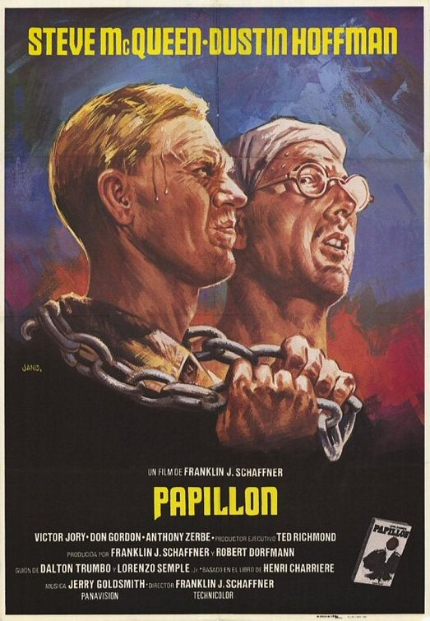 If butterflies are free, we can't we be, too? Also: I'm tired of sheltering in place.

Papillon (1973)
Viewed on Blu-ray from Warner Archive. It is also currently available to stream on Starz and to rent or buy via various VOD platforms.

Marched through the packed streets of a small town before being shipped overseas to permanent exile from France, the men are grim and understandably unhappy.

Sentenced to years of hard labor in harsh conditions, the men will then be compelled to remain in French Guiana for an equivalent number of years. Squeezed between Brazil and Suriname on the northern Atlantic coast of South America, the land is covered by forests. During the 19th century, French Guiana was developed as a penal colony for France.

First published in 1969, Henri Charrière's Papillon, described the author's imprisonment in French Guiana and numerous attempts to escape, starting in 1931. The book quickly became a bestseller and was translated into English and other languages, leading to the sale of its film rights to producers Ted Richmond and Robert Dorfmann.

As recounted by Rob Nixon at Turner Classic Movies, Roman Polanski was interested in filming the book, with Warren Beatty to star, but that never took flight. The producers optioned a screenplay by Lorenzo Semple, Jr. (TV's Batman), which gained Steve McQueen's interest in Charrière's story and character.

McQueen was a big star and so made a big request for payment: $2 million. Knowing that the production would require a big budget, the producers decided to secure another star, though not quite as expensive: Dustin Hoffman, at $1.25 million. That meant Hoffman needed a role that was nearly equivalent to McQueen's in importance to the story, as well as significant screen time, which the book (and Semple's script) lacked.

Thus, famed screenwriter Dalton Trumbo came on board to create a role for Hoffman, shortly before production began. He decided to expand greatly the part played by forger Louis Dega, so that he became a key player throughout Charrière's years-long imprisonment. (In the book, he disappears rather early.) Under the direction of Franklin J. Schaffner (Planet of the Apes, Patton), the production got underway without a completed script, in various, rugged locations.

Suffering from lung cancer, Charrière was nonetheless able to visit the production on location in Jamaica and offer his memories, which is captured in a behind-the-scenes featurette included on the Warner Archive Blu-ray. He died in July 1973, so he never got to see the finished film, which was released in December 1973 to a robust popular reception at the box office.

Published sometime in 1973, Banco, Charrière's followup book, detailed his life after the events described in Papillon, and also covered events leading up to his arrest. Both books, along with the screenplay by Semple and Trumbo, are credited as source material for the 2017 film version, starring Charlie Hunnam and Rami Malek, and directed by Michael Noer. (It's available to stream on Amazon Prime Video.)

That version borrows the structure of the 1973 film, so that Papillon has a more-or-less faithful companion throughout its running time. It also leans much more heavily on the fictionalized friendship angle, allowing for two male actors of roughly equal stature to star.

No one today can compare equally to Steve McQueen in his prime, however. He gives one of his finest performances in Papillon, which is enhanced by the audience's shared knowledge of his reputation as the "King of Cool." The expectation is met in the opening sequences of the film, introducing Charrière as a man who has been convicted for murder, a crime he says he did not commit, and sentenced to life imprisonment.

McQueen, the worldwide movie star, is determined to escape his prison bounds, no matter where the prison might be. He's got to be free, no matter what anyone does to him. Thus, to see him start to crumble when he is locked up in solitary confinement over a period of endless days, months, years, is punishing, not only to him, but to the audience. Steve is Mr. Cool. What is happening?

When I saw the television advertisement, back in 1973 and 1974, it featured the imagery of Papillon fleeing from the authorities, in slow motion, his limbs flapping in desperation. That was the imagery I brought with me when I finally saw the film in its entirety. As if often the case, though, the marketing material was deceptive. The King of Cool could lose it, perhaps entirely, under harsh, severe conditions. Oh, he was still alive, but had he really lost his cool entirely?

Happily, despite everything, his soul still yearns for freedom, and that is his driving force through the years. The message resonated then, and it resonates now, making the film timeless, and pushing aside any comparisons to McQueen's role as 'The Cooler King' in The Great Escape (1963).

Here, Steve McQueen is not the king of anything. He just wants to be free.

Do you feel this content is inappropriate or infringes upon your rights? Click here to report it, or see our DMCA policy.
Dustin HoffmanFranklin J SchaffnerHenri CharrièreSteve McQueenUS