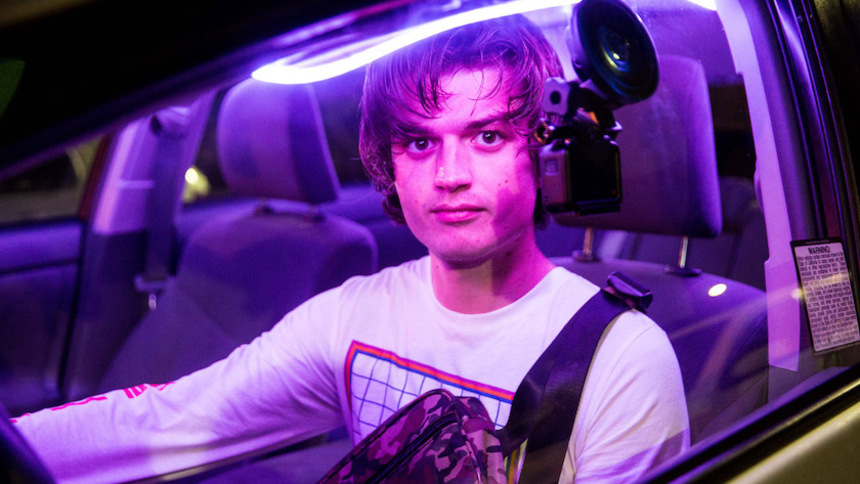 Sometime back in the 17th century, English political philosopher Thomas Hobbes claimed that absent a strong monarch or parliament, life for the average Englander would be “nasty, brutish, and short.”

If by magic, time travel machine, or thought experiment, Hobbes found himself in the 21st century, sat down in a pre-pandemic movie theater or fired up his laptop (MacBook Pro, most likely), he’d describe co-writer and director Eugene Kotlyarenko’s (Wobble Palace, A Wonderful Cloud, Feast of Burden) Spree, a nasty, brutish, short (but not short enough), surface-deep satire of social media and its white-male discontents (American Psycho by way of Taxi Driver). Substituting shock violence for meaningful critique, Kotlyarenko decided he didn’t need to do anything beyond come up with a premise, shoot found-footage-style, throw in a high body count, and congratulate himself for a blood- and gore-soaked job well done.

Spree centers on the oddly named Kurt Kunkle (Joe Keery, Stranger Things), a twenty-something, Generation Z loser, full-time incel, and part-time driver for an Uber- or Lyft-type app, Spree. (The word “spree” does some minor lifting here as both the name of a ride-share app and Kurt’s killing spree.) Obsessed with fame and celebrity, Kunkle imagines his dull, indistinct life will take a turn for the better if and when he becomes a major player as a social media influence. Except, of course, all if his initial attempts fail and fail badly.

With only a handful of followers and envious of a big social media influencer, Bobby (Joshua Ovalle), he once babysat. For the average person, the lack of fame, celebrity, or influence means next to nothing. For Kunkle, it’s an existential crisis with one and only one solution to his diseased, curdled mind: Going on a killing spree and live-streaming every single moment for his still non-existent fan base.

Kunkle’s spree, though, doesn’t get off to a great or even good start. Poisoning passengers don’t have the visual value his limited audience (led, no less by Bobby) apparently craves. Mocked as an utter and complete fake, accused of staging the murders, Kunkle decides to take it up a notch and starts killing his passengers in increasingly violent ways.

That’s exactly the point where anyone who’s been riding or figuratively dying with Kotlyarenko’s film will likely jump out of a moving car and take their chances on the asphalt. Where Kotlyarenko thinks he’s shocking or otherwise provoking audiences via a spate of increasingly gruesome, drawn-out murders live-streamed to Kunkle’s audience, he’s committing the same mistakes in judgment Kunkle repeatedly makes throughout Spree: Losing his actual audience (i.e., us) in a morass of poorly staged violence for horror-comic effect to rapidly diminishing returns. It’s the worst kind of satire: Satire without anything to say beyond the obvious.

For now, let’s leave aside what would actually happen in the real world: Any social media site would have shut his feed down much earlier on and/or contacted law enforcement to investigate. Let’s give Kotlyarenko and Spree a pass on that one.

Kotlyarenko also thinks he’s clever and super-smart for pitting Kunkle against Jessie Adams (Sasheer Zamata, Saturday Night Live), a stand-up comedian with a solid social media following who crosses paths with Kunkle early in his spree and later becomes his last passenger and the “final girl” bound to take Kunkle on and take him down for violating the rules and norms of the social order, this time twisted to pit a representative of white male privilege (though Kunkle sees it differently) against a successful Black woman, turning Jessie into an inadvertent avatar of racial and social justice. Or, at least she would, and could, have been in an entirely different film where blood and violence weren’t used to sidestep exploring social, cultural, and political issues with actual depth.

Kotlyarenko tries to throw in a few twists and turns, but they’re meant mostly to postpone the inevitable Kunkle vs. Jessie steel-cage match-up. Kotlyarenko converts Kunkle from spree killer to generic slasher trope, escaping almost certain death multiple times when the real world would dictate otherwise. That would be fine if Kotlyarenko didn’t have anything in mind except another generic entry tossed on the horror pile, but since he wants to do more, Spree has to be judged on his intentions and the actual results of those intentions.

At best, Spree is just another cynical attempt at manipulating audiences into believing they’re getting social commentary with their horror-comedy. At worst ― and Spree is often at its worst ― it’s borderline condescending and contemptuous of horror audiences (minus the borderline).

The film is now available to watch via various Video On Demand platforms.

Do you feel this content is inappropriate or infringes upon your rights? Click here to report it, or see our DMCA policy.
Eugene KotlyarenkoJoe KeerySasheer ZamataUS