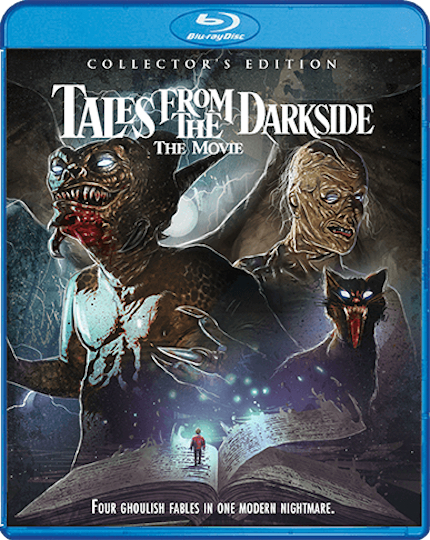 Scream Factory and Shout! Factory have added a treasure trove of older genre films to their catalog, and on August 25, Tales From the Darkside: The Movie, will join them.

The producers of the popular TV show decided to make a feature with notable writers and filmmakers, like George A. Romero adapting Stephen King's "The Cat From Hell") and Michael McDowell (Beetlejuice, Thinner) writing the "Lover's Vow" segment and also adapting Sir Arthur Conan Doyle's "Lot 249." John Harrison (2000's Dune, the Creepshow TV series), Romero's assistant director on the Tales From the Darkside series, directed all segments and the wraparound story.

The film is a classic anthology, with the three tales and the story that connects them all. In the wraparound story, Debbie Harry stars as a woman who's imprisoned child Timmy (Matthew Lawrence) and intends to cook him for her dinner party. The inventive kid reads stories to her through his dungeon bars as a stalling tactic.

Next, we've got "Lot 249," starring Julianne Moore, Steve Buscemi, Christian Slater, and Robert Sedgewick, which is quite creepy and well made. It's even lit in desert tones to reflect the mummy theme.

"The Cat From Hell" is amazing. Not only because of the way it's shot and how it uses transitions to tell the story, but because they use an actual cat (or two). What the crew was able to accomplish is remarkable here. Big Pharma guy Drogran (William Hickey, Sea of Love, The Nightmare Before Christmas) hires hitman Halston (Davide Johansen, The New York Dolls, Scrooged) to kill the cat that's been picking off the residents of his mansion one by one, and Drogan fears he's next. He's partially right. This tale must be seen to be believed.

Lastly, James Remar and Rae Dawn Chong star in "Lover's Vow," which was based on a Japanese folktale that Remar discusses in an interview included on the disc. It takes place in New York City, and Remar's artist Preston suddenly makes it big in love and his career --- but at a serious cost, of course. This story is as sweet as it is gruesome, and a great way to close out the film.

Tales From the Darkside: The Movie holds up in all departments: directing, acting, writing, and practical special effects. And it's just so much fun.

The image on this release looks fantastic, absolutely pristine, and the sound matches for a seamless viewing experience. But let's check out the:

The making-of documentary is feature length and I must say that I really appreciated that it was broken up into six chapters. That means it's a major convenience for Blu-ray bonus feature afficionados --- if something comes up and you've gotta turn the documentary off, you can find where you left off pretty easily. Often, you've just gotta fast forward and that takes awhile if it's a 90-minute featurette. Hats off to Red Shirt Pictures and Scream Factory for this simple relief.

Anyway, the doc was great, with lots of interviews. A lot of the talking heads on these types of bonus features can drone on and on, but sometimes we get lucky with great subjects and interviewers. It's always a treat to see special effects artists speak --- in this case, genre titans KNB. As for actors, hearing from creature performer Michael Deak was fun, and it was lovely to see Rae Dawn Chong talk about her experience starring alongside James Remar in "Lover's Vow." Likewise, Remar himself speaks very highly of being in the film and his interview was also quite animated.

Another great thing about the doc was that the filmmakers --- director Harrison, DP Robert Draper, producer Mitchell Galin, and production designer Ruth Ammon --- spoke about the actual craft of making Tales From the Darkside: The Movie, and how they did it. It was especially illuminating to hear about the tricks of the trade for "The Cat From Hell" segment, which was artfully directed using techniques we don't often see anymore.

In short this Scream Factory Blu-ray release of Tales From the Darkside: The Movie is awesome. You can pre-order the disc here.

Tales from the Darkside