70s Rewind: THOMASINE & BUSHROD, Stealing For a Good Cause 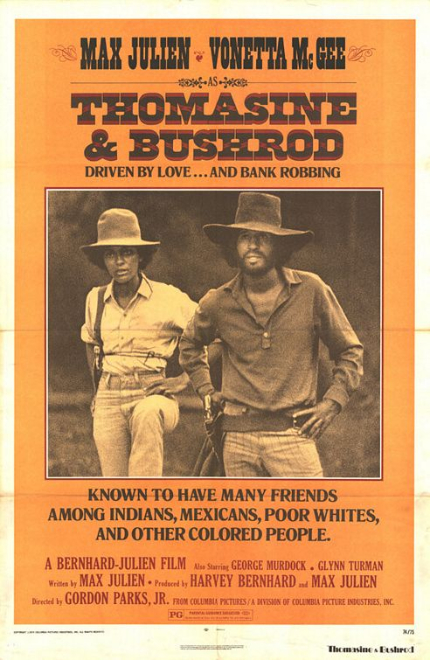 Thomasine & Bushrod (1974)
Now available to stream on Amazon Prime Video. Also available to rent or purchase on a variety of On Demand platforms.

A live wire waiting to crackle, Thomasine (Vonetta McGee) is a force of nature, coiled up inside the lithe body of an independent Black woman in 1911.

Her grit and determination are demonstrated in the opening scene, as she captures a wanted criminal in New Mexico, U.S.A., by reversing his domineering expectations. In turn, U.S. Marshal Bogardie (George Murdock) shoves her into a cell 'to teach her a lesson,' he says, but he is the one who needs to be educated.

Thomasine spies her next target on the wall of the local jail, which leads her to Bushrod (Max Julien), with whom she shares a past relationship that was not entirely disagreeable. Old sparks fly, and, soon enough, Thomasine abandons her career as a bounty hunter and joins Bushrod on the run, engaging in criminal activities with a swashbuckling air of adventure.

As the adventure plays out, Thomasine and Bushrod show their true colors. Bushrod imagines himself to be a modern-day Robin Hood, stealing from the rich and giving to the poor. Thomasine wouldn't mind keeping some of that money for themselves, dreaming of domestic life on the range, complete with their own animals and children to raise. The bigoted U.S. Marshal Bogardie, however, remains determined to bring them down.

Gordon Roger Parks, credited as Gordon Parks Jr., directed. The son of Gordon Alexander Parks, who directed Shaft (1971), the younger Parks was a musician and photographer in his own right before he made his smashing debut as a feature director with Super Fly (1972), capitalizing on the trailblazing success of his father's film amid the early rise of the so-called Blaxploitation sub-genre. This picture, which rambles agreeably around New Mexico and other nearby states as Thomasine and Bushrod rob isolated merchants, escape in motorized vehicles, and are chased by men on horseback. is less dependent on narrative than on the romantic relationship between the lead characters.

Thomasine is a strong woman who softens around Bushrod as the months pass, though she remains hopeful about her domestic dreams. Meanwhile, Bushrod appears to double down on his socialist resolve, which he often places above their relationship.

Perhaps in large part due to its 'romantic outlaws on the run' component, which provides fitful boosts to its disjointed narrative, the film has often been compared to Arthur Penn's Bonnie and Clyde (1967). The key difference is that Bonnie and Clyde were portrayed as entwined bolts of lightning by Faye Dunaway and Warren Beatty; their ultimate fate is never in doubt, even if the film wasn't inspired by a true story.

Taking place about twenty years before that, Thomasine and Bushrod is much more a dreamy depiction of a couple who have finally figured out how to live together and be happy, only to be foiled by the harsh consequences of their illegal activities, for which they are pursued by the dogged, relentless Marshal Bogardie. Unlike Bonnie and Clyde, Thomasine and Bushrod are not crazed killers; they take no pleasure in murder or savagery, shooting back only to defend themselves and those they love.

Actor Max Julien found early success in Jules Dassin's superbly tense Uptight (1968) and then expanded his artistic palette by writing and co-producing Cleopatra Jones (1973) for Warner Brothers. That same year, he starred in The Mack as the titular character for producer Harvey Bernhard and American International Pictures. Moving over to Colombia Pictures, he wrote the original Thomasine & Bushrod screenplay and also produced the film with Harvey Bernhard. His performance is relaxed and confident; his character doesn't have anything to prove, at least in his own eyes.

Appearing on the big screen in Sergio Corbucci's Western The Great Silence (1968), Vonetta McGee came to wider attention in 1972 through her starring role in Melinda, along with her noteworthy supporting performances in Hammer and Blacula. She brought an elegant touch to her character in John Guillerman's Shaft in Africa, opposite Richard Roundtrack.

Reportedly, she and Max Julien were in a relationship before, during, and after the making of the film. Released in the U.S. in the spring of 1974, Thomasine & Bushrod caught my eye during its theatrical release, mostly because the idea of Black couple starring together in a Western sounded very appealing to me, though it was one of many movies released during that era that I knew about, yet never actually had the opportunity to see at the time.

Watching it recently on a whim, I was immediately caught up in McGee's intensity, and then propelled by Parks' pacing, which keeps the action moving constantly. A degree of repetition emerges over time, as the robberies and car/horse chases become routine, yet the emotional chemistry between the two leads lends the entire picture a very enjoyable buoyancy that kept my eyes on the screen.

Director Gordon Parks Jr. completed just two more films (the rocking action picture Three the Hard Way and comedy-drama Aaron Loves Angela) before perishing in a plane crash along with three others while in production on another feature. Producer Harvey Bernard next made The Omen, part of a long and often successful career.

Max Julien began to focus on other fields of endeavor, including sculpting. making documentary films, and designing clothing. Vonetta McGee co-starred in Clint Eastwood's The Eiger Sanction (1975) and later became a frequent presence on small-screen series and movies. She made appearances in Alex Cox's Repo Man (1984), Charles Burnett's To Sleep With Anger (1990), Richard Brooks' Johnny B Good (1998), and Black August (2007). She died in 2010.

Do you feel this content is inappropriate or infringes upon your rights? Click here to report it, or see our DMCA policy.
Amazon Prime VideoGeorge MurdockGordon Parks Jr.Max JulienUSVonetta McGee