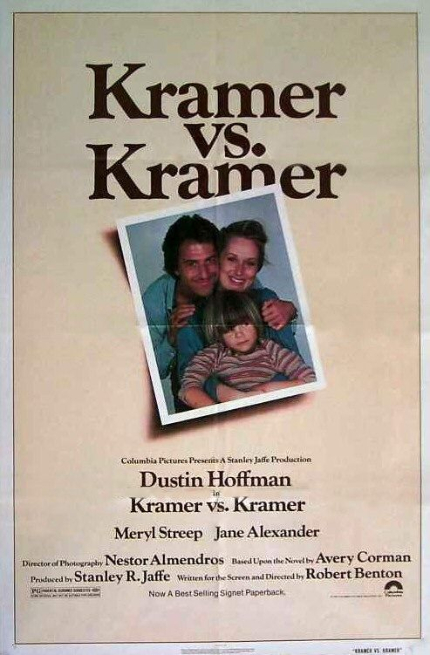 How a man became a father.

Kramer vs. Kramer
Available to stream on The Criterion Channel through August 31, 2020.

In truth, John and Mary, featuring Dustin Hoffman and Mia Farrow as two anonymous singles who meet at a bar, sleep together, and then deal with the after-effects, was released at the tail end of 1969. Ten years later, Kramer vs. Kramer, featuring Dustin Hoffman and Meryl Streep as a married couple who separate, live apart for more than a year, and then fight over custody of their son.

Hoffman built on the success of The Graduate (1967) and Midnight Cowboy (1969) to craft a decade in which he showcased the range of his talents, no matter the size of the role, whether supporting opposite the likes of Steve McQueen in Papillon (1973) and Robert Redford in All the President's Men (1976), or, more commonly, as the star of intense dramas, such as Straw Dogs (1971), Lenny (1974), and Straight Time (1978), as well as lighter yet sprawling entertainment, like Little Big Man (1970).

His artistic ambition had no boundaries, it seemed, which may have made him the perfect choice to star in Robert Benton's Kramer vs. Kramer (1979), based on a novel by Avery Corman. Released in December 1979, the film was a popular attraction at the box office, and then won five Academy Awards, including two for director/screenwriter Benton, one for Hoffman, one for supporting actress Meryl Streep, and one for Best Picture, which went to producer Stanley R. Jaffe.

Magazine journalist turned screenwriter Benton won instant acclaim for Bonnie and Clyde (1967), his maiden script written in collaboration with David Newman, which led a few years later to Benton's directing debut, the decidedly modest Bad Company (1972) (more on that film here, by yours truly) and he followed that a few years later with the delightful The Late Show (1977), pairing Art Carney and Lily Tomlin in a comic mystery that paid homage to private-detective movies.

Benton and Newman contributed to the screenplay for Richard Donner's Superman (1978), and then Benton flew solo on Kramer vs. Kramer. First published in 1977, the novel by native New Yorker Avery Corman (Oh, God!) provides what sounds like a solid foundation for Benton's script, which begins with a close-up of Joanna Kramer (Mery Streep) as she says goodbye to her 7-year-old son Billy (Justin Henry).

Streep absolutely crushes the role of a woman who has been defined by two men in her life: her distant husband Ted (Dustin Hoffman) and her young son Billy. The film surveys the landscape after she leaves and finds her severely lacking, without fully addressing the culpability of Ted in failing to give her the attention and support she needed and deserved, as well as preventing her from pursuing any career goals.

From today's vantage point, and without emotional involvement in the lives of Ted and Joanna as a couple, or any personal experience with marital separation, divorce, or parenthood, it's tempting to make easy conclusions about who was at fault and why. What I recall from that time period is that many, many people acclaimed the film, and I shied away from it entirely.

As a young man, I certainly did not want to see a family drama about divorce. My first two viewings in the 1980s helped me to appreciate the dry humor and the inherent drama that Robert Benton drew out of the material and the performers.

During my most recent viewing, however, I realized I felt much more empathetic toward Joanna than in the past. It's not just that I've 'mellowed' or experienced my own personal disasters in relationships, it's that it's more apparent to me than ever that Ted and Joanna each followed their own worst instincts in their relationship, without ever talking it out or coming to any kind of resolution in how they related to each other.

Some 14 months after the initial separation, they finally meet in a restaurant, and tensions quickly escalate, showing that they can't even talk to each other! Could they ever? Joanna says later that the first two years of their marriage were fine, but the relationship broke down as Ted pursued his career and Joanna became trapped at home.

The film remains problematic dramatically at times. Ted's crucial employment transition still rings several false bells, and I dearly wish we had a more clear-eyed view of Joanna's character and history. For all that Ted is shown growing and becoming a better person, husband, and man, Joanna is relegated to a tearful emotional creature.

Still and all, Kramer vs. Kramer remains a snappy family comedy-drama that is immensely likeable. In its wake, it provoked considerable thought, discussion, arguments, and some dramatic changes in popular culture.