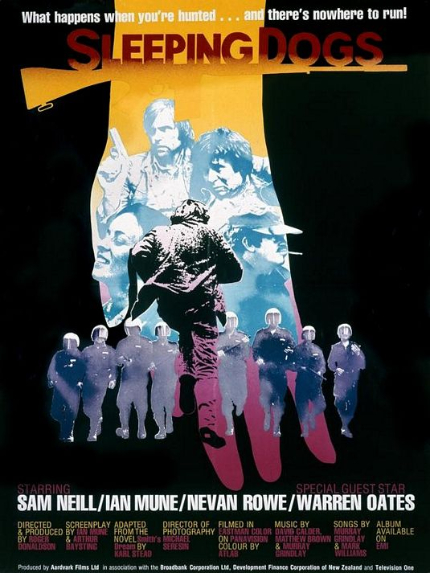 It could happen to you, maybe: a family man in New Zealand unwittingly becomes a key figure in a revolution.

Billed as the actor's first starring role, four years before he played the Antichrist, aka Damien Thorn, in The Final Conflict (1981), Sam Neill begins the movie in a slow boil that quickly turns to rage as he says goodbye to his wife (Nevan Rowe) and children.

Directed by Roger Donaldson, the film is based upon the novel Smith's Dream by Karl Stead (C.K. Stead), which was first published in 1971. The screenplay, credited to Ian Mune and Arthur Baysting, picks up the story as the rakishly handsome Smith (Sam Neill) storms out of his family's house and heads to parts unknown in New Zealand.

Spying a small, beautiful island just off the coast, Smith decides it's the perfect spot for him to recuperate from his broken marriage and contemplate the future. On the island, he hears news over the wireless that a murderous uprising has occurred back home, martial law has been declared, and a revolution of some sort appears to be underfoot.

Isolated from nearly everyone, and sustaining himself by hunting and fishing for food, Smith is blissfully unaware of what is happening just a relatively short distance away. Frankly, he doesn't care much, anyway; he is happy and satisfied with his new lot in life.

One day, though, armed military personnel arrive unexpectedly on the island and haul him away to the clinker, with no explanation. Before he can suss out what is happening, he becomes a key figure in a revolution that has swept the country.

As gratifying as it is to behold Sam Neill as a young and magnetic screen presence, doing battle with everyone from his wife's new lover Bullen (co-scripter Ian Mune) to Colonel Willoughby (Warren Oates), the arrogant American leader of a U.S. military force sent to assist the embattled "official" government, it's all held together with percussive force by Roger Donaldson, in his feature debut as director.

Donaldson gained wider notice with Smash Palace (1981) before establishing a noteworthy career in Hollywood over the decades, including the pulpy favorites No Way Out (1987), Species (1995), and The Bank Job (2008). Here, though, we can already see his ability to ramp up the action in a very entertaining fashion, exploding around a main character who refuses to accept what is happening all around him.

Living in the U.S. during a time when government leaders appear to be perfectly willing to play with the definition of what is demonstrably true and what is alarmingly fake, the film can't help but ring a prescient bell or two. In Roger Ebert's note on the film, he says that it was the biggest box-office hit of its time in New Zealand, and it's easy to see why -- I adore thoughtful popcorn movies, which translate well to a variety of demographics and nationalities.

Mostly, it's just great fun to watch Sam Neill under the direction of Roger Donaldson in a deceptively entertaining political action-thriller that resonates far beyond the era in which it was made.

Do you feel this content is inappropriate or infringes upon your rights? Click here to report it, or see our DMCA policy.
70sNew ZealandRoger DonaldsonSam Neill