YOU SHOULD HAVE LEFT Trailer: Maybe a Few Twists Remain 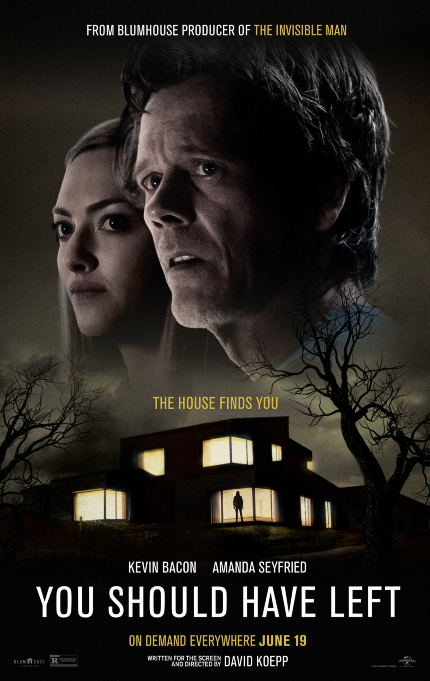 Here's a trailer from a major studio (Universal Pictures) and a well-known company (Blumhouse Productions) that features major stars (Kevin Bacon and Amanda Seyfried) and a familiar theme (strange happenings in an isolated house) from an experienced writer/director (David Koepp) and it appears to reveal, well, every major plot point in the movie. That can't possibly be right, can it?

Considering all that talent, I'd say: no, especially since it originates from the mind of David Koepp, who adapted Stephen King's Secret Window into a terrific thriller and before that transformed Richard Matheson's Stir of Echoes into an entirely unsettling picture.

Thus, it seems likely that You Should Have Left will prove to be something different than the tale that is spun in the first trailer. On the plus side of the equation, we won't have to wait long to decide: the film will be available to watch on a host of Video On Demand providers as of Friday, June 19, 2020.

Do you feel this content is inappropriate or infringes upon your rights? Click here to report it, or see our DMCA policy.
Amanda SeyfriedBlumhouseDavid KoeppKevin BaconUniversalUS