Review: YOU SHOULD HAVE LEFT Offers Slow-Burn Chills and Thrills 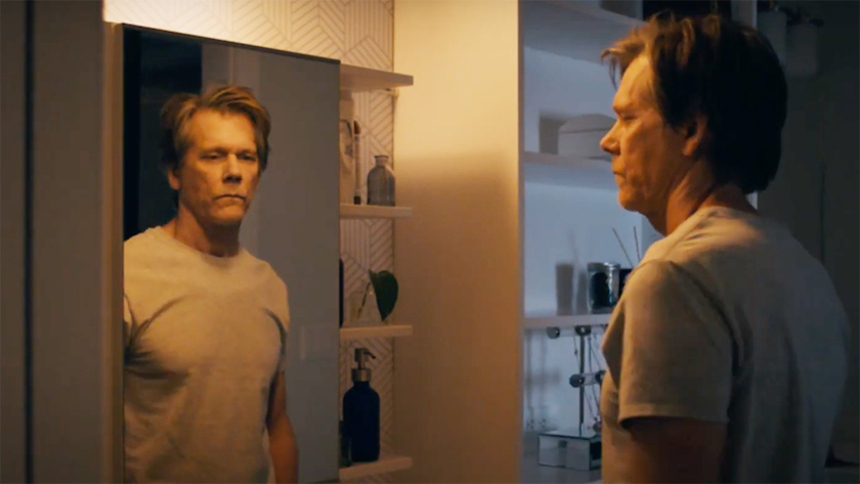 Revitalizing a flagging directorial career after a justly forgotten critical and commercial failure can take many roads or many directions, but it’s harder to fail or make another misstep if you go the low-budget, genre route, as writer-director David Koepp (War of the Worlds, Indiana Jones and the Kingdom of the Crystal Skull, Spider-Man, Mission: Impossible, Jurassic Park), decided to do with You Should Have Left, a micro-budgeted, supernatural horror film adapted from Daniel Kehlmann’s well-regarded 2017 novella.

With uber-producer Jason Blum and his Blumhouse Productions handling finances and Kevin Bacon co-producing and starring in the lead role, You Should Have Left joins the haunted house sub-genre as, if not a classic-in-the-making, then as a more-than-solid, thoroughly engaging, ace-level effort from everyone involved.

Departing periodically from Kehlmann’s novella, You Should Have Left centers on Bacon’s character, Theo Conroy, a wealthy, retired businessman, and his age-inappropriate wife, Susanna (Amanda Seyfried), a well-known, professional film actress, and their s6-year-old daughter, Ella (Avery Essex). For Theo, a widower once accused of murdering his wife (he was acquitted), a second marriage and daughter provide him with the proverbial second “lease on life.” For the much younger, not-fully-committed Susanna, Theo represented the emotional and financial security she probably felt she needed at one time, but a continually successful acting career and thus the diminished need for Theo’s financial support, suggests a different, growing need for independence.

Generational differences — he’s a Boomer raised in another century, she’s a Millennial raised on social media — add to the obvious friction between them, leading to the decision to take an unscheduled, semi-opened-ended vacation in Wales before Susanna’s next role begins filming two months later in Europe.

Almost immediately, something seems off about the imposing, isolated rental, a modernist structure filled with odd angles and an overabundance of hallways, doors, and rooms (some of them subterranean). With guilt about his previous wife’s drowning never far from his mind, Theo engages in a series of exercises to help him find the peace of mind that perpetually eludes him, listening to a self-help audiobook voiced by a soporifically professorial male voice when the mood strikes him and furiously jotting down his thoughts, feelings, and other randomness in a daily journal.

Those efforts, however, prove to be futile, as Theo’s nightmares increase in frequency, intensity, and duration, a sign that, despite his middle, halting efforts at self-improvement, he’s fraying at the seams, unraveling psychologically as his fears, doubts, and anxieties, not to mention overwhelming guilt, begin to overwhelm him and poison his relationships with both Susanna and Ella.

So far, so predictable, but for all of its familiar turns, twists, and switchbacks (the Overlook Hotel looms large here), You Should Have Left manages to expertly draw us into Theo’s psychological disintegration — with, of course, the possible/likely help of a ghost- or demon-haunted hose — thanks to Koepp’s ruthlessly efficient screenplay. With more than three decades of experience as a screenwriter, Koepp knows how to pare back exposition, doling it purely on an as-needed basis, never giving us too much or too little, but always just enough to keep us engaged.

It also helps that Koepp, never the most visual of screenwriters-turned-directors, has developed a fine eye for visual storytelling, aided undoubtedly by production designer Sophie Becher’s creatively reimagining of haunted house conventions and cinematographer Angus Hudson’s minimalist camera techniques. Where You Should Have Left veers into been there/seen that plot territory, the fresh visual approach functions as a counterbalance, if not always as a corrective.

It helps, of course, that Koepp tapped Bacon, one of our least appreciated, underworked actors, to step into the role of Theo and not only because he’s approximately the right age (61), but because Bacon can deliver the full range of Theo’s ever-shifting emotions and his subsequent psychological deterioration/collapse without sacrificing audience sympathy or even empathy (it’s harder than it looks). For all of her character’s apparent immaturity, Amanda Seyfried manages to keep Susanna on the right side of likability and relatability even after one or two late-film revelations would suggest the opposite.

Almost as importantly, Koepp elicits a surprisingly grounded, frills-free performance from Avery Essex as Ella. Given the combination of Ella’s continuing narrative importance and substantial onscreen time, a poorly cast or performed Ella could have damaged or even sunk You Should Have Left, especially in the late going when the film goes full-on creepy and freaky. Instead, Essex contributes to a solidly effective, visually inventive, psychological horror film that bodes well for the next step in Koepp’s career as a filmmaker.

The film is now available to watch via various Video On Demand platforms. Visit the official site for more information.

Do you feel this content is inappropriate or infringes upon your rights? Click here to report it, or see our DMCA policy.
Amanda SeyfriedDavid KoeppKevin Bacon