Spike Lee delivers another masterclass in narrative and political filmmaking. 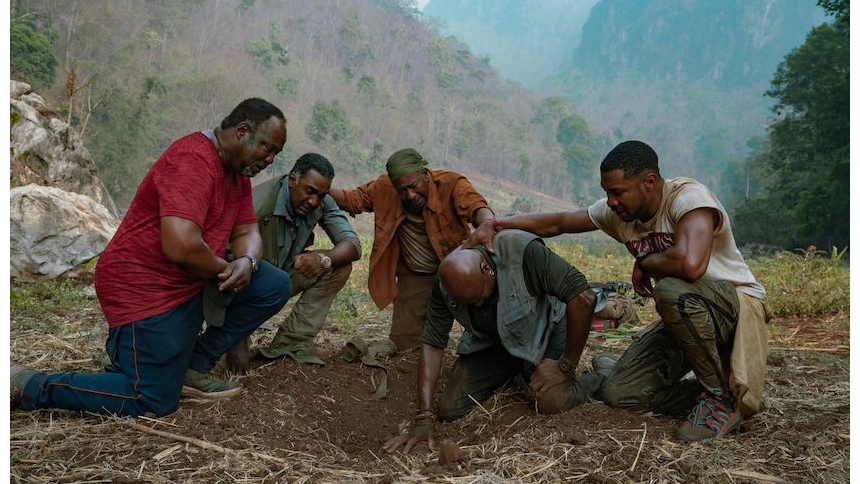 If the annual ritual of awards ceremonies meant anything — and for the record, they don’t mean anything beyond water-cooler talk or clickbait articles — Spike Lee wouldn’t just have a single Academy Award for Best Adapted Screenplay two years ago for BlacKkKlansman or a handful of nominations across a filmmaking career spanning more than four decades, but an entire bookcase filled with Academy Awards for Best Director, Best Screenwriter, and Best Picture for, at minimum, Do The Right Thing, Malcolm X, 25th Hour, and BlacKkKlansman.

Guided by the maxim that all art, including commercial art, is political, Lee’s films have interrogated American history with the critical eye of the disenfranchised, the dispossessed, and the oppressed. For Lee, art must meaningfully engage with changing — and in some cases, unchanging, rigid, inflexible — social, cultural, and economic realities, specifically the prism of the systemic racism, centuries-old injustice, and white supremacist violence that has defined the African-American experience for four hundred years.

Lee’s lifelong cinematic concerns, fixations, and obsessions permeate every shot, scene, and sequence of his latest film, Da 5 Bloods, a Vietnam War drama that explores the experience of African-American soldiers during the war and fifty years later when they return to Vietnam to find the remains of a fallen comrade and leader along with gold bullion worth millions of dollars. Like BlacKkKlansman, Da 5 Bloods allows Lee, 63, but with the energy, concentration, and ambition of a man half his age, to bring his considerable talents and finely honed skills as a generational, master filmmaker to bear on an urgent, timely work of commercial art, made all the more urgent and timely with the recent nationwide Black Lives Matter protests that followed in the wake of George Floyd’s death in police custody on May 25th.

While Da 5 Bloods doesn’t touch on police brutality specifically or the police state that targets African-Americans in general, it does examine a little-explored facet of the Vietnam War, the experiences of African-American soldiers, conscripted to fight in an immoral, unethical war halfway across the world for a country that refused to grant African-Americans the civil liberties, rights, and freedoms ostensibly guaranteed them by the U.S. Constitution and 13th, 14th, and 15th Amendments. Even before Da 5 Bloods properly begins, Lee interweaves archival/documentary footage of Muhammed Ali refusing to serve in the Vietnam War (he went to prison instead, losing his boxing title), Malcolm X, Martin Luther King, Jr., and Bobby Seale (America’s wars were fought and won by a disproportionate number of African-American soldiers). It’s American history, African-American history as the necessary prologue for everything that follows in Da 5 Bloods.

The “5 Bloods” of the title include Paul (Delroy Lindo), Otis (Clarke Peters), Melvin (Isiah Whitlock Jr.), and Eddie (Norm Lewis), men driven by twin goals: Finding and returning the remains of the fifth blood, Stormin' Norman (Chadwick Boseman), and locating the gold bullion they left behind in Vietnam after a failed rescue effort of a downed CIA airplane.

The four became five again when Paul’s estranged son, David (Jonathan Majors), appears at their hotel in Ho Chin Minh City. David knows about the gold and wants in, offering his silence for an equal share of the gold. David also hopes to bond with Paul, though Paul, Da 5 Blood’s most sharply drawn, contradictory character, the group’s lone Trump supporter (his red “Make America Great Again” baseball cap becomes something of a talisman, lost, found, and lost again), seethes with bitterness, rage, and regret at a wasted life lived as an outsider from economic opportunity in his own country. Like the other bloods, he suffers from PTSD, haunted by the war and the wrenching, devastating loss of Stormin’ Norman, a friend, mentor, and teacher who led the bloods safely through multiple skirmishes and battles during the war.

For Lee, Norman functions as part Malcolm X, part Martin Luther King, Jr., and part Huey P. Newton, an activist, a radical, a revolutionary forced to fight another (white) man’s war and like his real-life counterparts the victim of violence. It’s Norman who ameliorates their justifiable rage when they learn about MLK’s assassination in Memphis, Tennessee, not with platitudes cliches, but by recognizing the source of their pain and anguish in 400 years of slavery and Jim Crow.

Norman’s death haunts Paul in large part because he couldn’t live up to the idealized, never aging version of Norman he still sees in his dreams every night since he returned from the war. Paul’s instability, fueled by unequal parts self-loathing, self-hatred, and greed, leads to intense conflict with the other bloods and David. Narratively, Paul’s instability leads to complications that take a decided Treasure of the Sierra Madre plot turn. (A lifetime cinephile, Lee also references or cites Apocalypse Now, Rambo, Missing in Action, and other Vietnam War-related films).

While Lee’s stylistic and experimental flourishes, not to mention his approach to narrative and themes, tend to get the most attention (justifiably so), his ability to elicit career-best or near-career-best performances from his casts across four decades rarely does. Da 5 Bloods is no exception. Lee’s script, co-written with Kevin Willmott (Ninth Street, C.S.A.: The Confederate States of America, and Bunker Hill) from an original spec script co-written by Danny Bilson and Paul De Meo, The Last Tour, delivers an overabundance of well-rounded characters, especially the 4 bloods and David, though ultimately Da 5 Bloods belongs to Lindo’s speech-prone Paul.

Paul speaks not just for himself, but for African-American veterans who returned to a country that once again refused to treat them as equal citizens. Where the others somehow found accommodation with a racist social order, Paul never did and never will. As written by Lee and Willmott and as unforgettably, indelibly performed by Lindo, Paul serves the virtual embodiment of 400 years of justifiable indignation, resentment, and fury.

The film is now streaming on Netflix.

Do you feel this content is inappropriate or infringes upon your rights? Click here to report it, or see our DMCA policy.
Chadwick BosemanClark PetersDelroy LindoNetflixSpike Lee