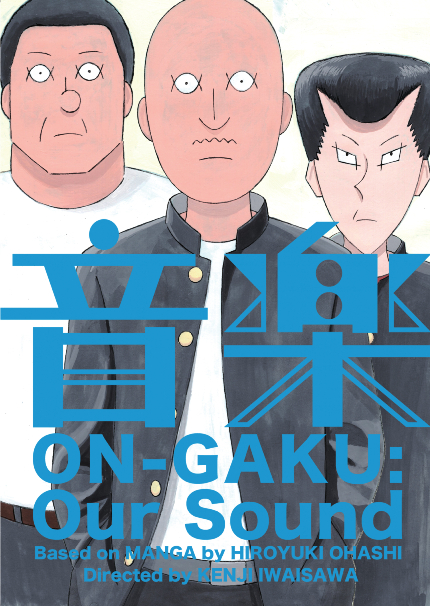 The new On-Gaku: Our Sound trailer has a good beat and you can dance to it.

Hailing from Japan, the animated feature film has just been acquired by GKIDS for North American distribution. Directed by Iwaisawa Kenji and based on a manga by Ohashi Hiroyuki, the film has been in production for more than seven years. It's "composed of over 40,000 hand drawn frames," per the official release, "using the rotoscoping animation technique."

The trailer showcases the deadpan humor of the characters, who are possibly the least excited group of musicians I have ever seen. (For purposes of this article, I will not discuss certain bands that are known to partake liberally of certain illegal substances.) I like this synopsis very much, so I will quote it here:

"When you're a bored teenager looking for thrills, sometimes the only thing you can turn to is rock 'n roll. Having no skill, money, or even a full set of drums, a feared trio of high school delinquents nevertheless decide they are destined for musical glory in a quest to impress their only friend Aya, avoid a rival gang, and - most importantly - jam out."

Iwaisaw animated the film "almost entirely." Sakamoto Shintaro, described as a "Japanese alt-rock legend" plays a lead performance. I'm afraid I know next to nothing about Japanese alt-rock, but I like what I'm hearing here. Your mileage may vary.

Enjoy the trailer below. GKIDS will release the film in 2020, so we can all look forward to dancing and/or Zooming together.