Nigel Davenport, Michael Murphy, and Lynne Frederick star in the creepy flick, directed by Saul Bass and now streaming on The Criterion Channel. 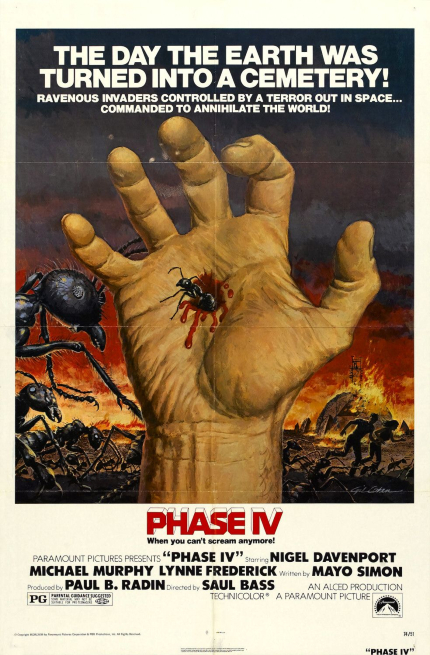 Phase IV
Now streaming on The Criterion Channel through June 30, 2020.

Otto Preminger's The Man With the Golden Arm grabbed attention with its startling opening title sequence, created by graphic designer Saul Bass, who went on to create a wide variety of opening credits that set the table for the film that followed.

This phase of Bass' career culminated in Seconds (1966), after which he put his focus on filmmaking itself and other endeavors for a number of years. Somehow, he became involved with Phase IV, released by Paramount Pictures and based on an original screenplay by Mayo Simon, who adapted Martin Caidin's Marooned (1969) and, after this, became one of two writers credited for Futureworld (1976; more on that film here).

Hailing from Illinois, Mayo Simon was born in 1928 and is credited for several scripted television shows, beginning in 1956. His script for Phase IV starts with the idea that a strange celestial phenomena has caused a colony of ants to begin construction on tall, thin columns that resemble a skinny Stonehenge. Also, they are marching across the Arizona desert, aggressively defeating larger insects in battle and threatening a small community, which has mostly taken flight to escape the ants' destructive movements.

Two scientists arrive to investigate further: Dr. Ernest D. Hubbs (Nigel Davenport, No Blade of Grass) and James Lesko (Michael Murphy, Brewster McCloud). They set to work on experiments in their isolated desert lab, where they are soon joined by Kendra Eldridge (Lynne Frederick, No Blade of Grass), a local resident who has reason to be angry at the ants.

The early sequences, especially, feature close-up insect photography by Ken Middleham that is utterly fascinating and, yes, potentially quite frightening. What if these creatures, small in size yet immense in number, suddenly began acting against mankind for an unknown purpose with unknown goals?

Hubbs is an academic through and through, a scientist who looks at everything from a god-like perspective, rarely displaying any recognizable emotional traits, such as empathy or even sympathy, instead driven by a raging desire to see what happens and analyze it. Lesko supplies the human side to the equation, a linguist who hopes to be able to communicate with the ants and, perhaps, mediate a treaty (?!).

Strange and mysterious, Phase IV is a quiet, chilling, compelling thing to watch as it evolves from a nature documentary into a cold scientific thriller into a survival drama into an apocalyptic adventure.

Or maybe it's best described as a post-apocalyptic, sci-fi prophecy, in slow motion. The ants are coming. And there's nothing we can do about it.

The film is available on Blu-ray from Olive Films, released in 2015. Glenn Erickson reviewed the Blu-ray and also provided details on the alternate ending, which is not included on the disc.

Do you feel this content is inappropriate or infringes upon your rights? Click here to report it, or see our DMCA policy.
Lynne FrederickMichael MurphyNigel DavenportSaul Basssci-fiThe Criterion Channel