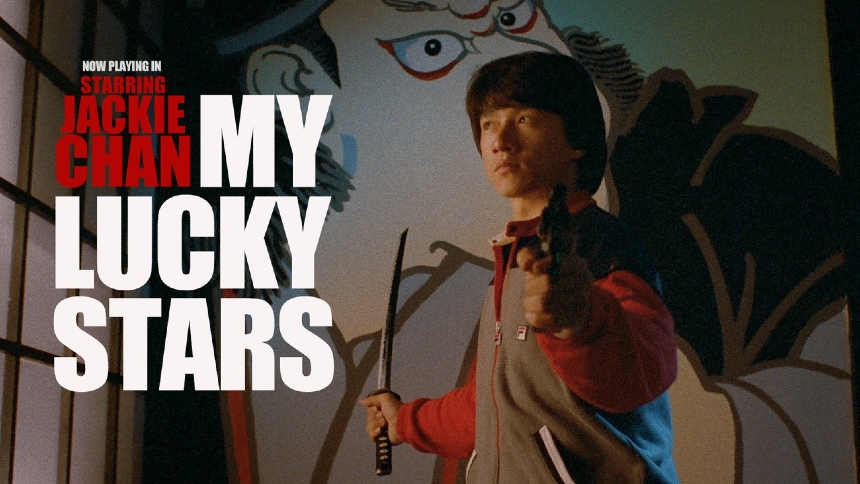 Unfortunately, the second installment in the 'Lucky Stars' series is emblematic of its era.

My Lucky Stars
Now streaming on The Criterion Channel.

Not to make too big a deal about it, but holy cow, this movie is sexist.

Directed by Sammo Hung, the follow-up to his own Winners and Sinners (1983) featured four of the same leading actors -- himself, Richard Ng, Charlie Chin, and Stanley Fung, with Eric Tsang replacing John Sham -- though they are playing different characters. They are all still bumbling fools, they all get involved in some terrific action scenes, and they all like the worst kind of misbehaving children around women, who are treated in a manner that dives distastefully into misogyny.

I first saw the film about 20 years ago on a first-edition DVD, and what I remember most are the terrific, extended action sequences the\at open and close the film. My Lucky Stars begins with Jackie Chan and Yuen Biao pursuing a criminal on the streets of Tokyo before the chase takes them to an amusement park, where they clamber around the rides until Yuen Biao is kidnapped and Jackie Chan is left frustrated.

(By the way, the restored version on The Criterion Channel looks great. Perhaps needless to say, it's a tremendous upgrade from the picture quality I remember on the first-edition DVD.)

Jackie needs help, and he doesn't want to involve the police, so he calls upon his old friend from the orphanage, Sammo Hung, who gathers his four silly friends, along with a police officer (Sibelle Hu) who goes undercover. As they head to Tokyo to meet up with Jackie, the boys spend a huge, unwelcome chunk of time treating Sibelle Hu like their personal plaything.

As Brian N. pointed out in his review at his invaluable site Hong Kong Cinema -- View From the Brooklyn Bridge years ago, "It's just not very funny and goes on way too long. ... but getting through the so-called comedic bits felt like more of a chore than cleaning your clothes at the laundromat." Exactly!

My memory failed me on this one. As much as I enjoyed revisiting the opening sequences, the extended middle, "comedy" segments felt very long indeed, and made me feel weary to the bones.

Yes, it was 35 years ago that the film was made, times were different, the culture in the U.S. and in Hong Kong was different, and sensitivities have been raised significantly in recent times. Your mileage may vary, but not all reunions are entirely pleasant.

Do you feel this content is inappropriate or infringes upon your rights? Click here to report it, or see our DMCA policy.
Criterion ChannelHong KongJackie ChanSammo Hung