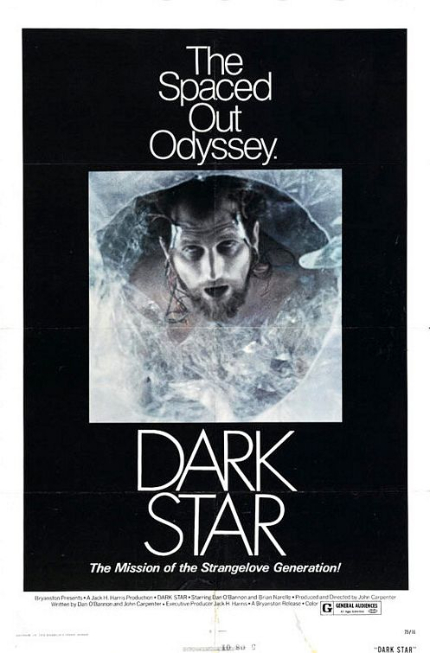 Travel back to a more innocent time, when beach balls could be aliens, and stars did not participate in wars.

Dark Star
Now streaming on The Criterion Channel, through June 30, 2020.

Before Halloween, even before Assault on Precinct 13, John Carpenter made a student film with his friends that gained theatrical release.

From today's perspective, that's amazing. As a student at USC, Carpenter and his friends, including Dan O'Bannon, who co-wrote the script with Carpenter, edited the film, and served as production designer and special effects supervisor, completed the 45-minute project, shot on 16mm, in 1972. Eventually, the film was expanded to feature length and premiered at Filmex in Los Angeles in 1974, underwent additional changes, and was released in theaters in early 1975. It was re-released in 1979.

The complete story behind the film is possibly of greater interest than the film itself, per the word of mouth I've always heard, but thanks to The Criterion Channel, I finally watched Dark Star and found it to be a delightful, imaginative low-key sci-fi comedy that, even now, serves as a wonderful counterpoint to the much more ambitious productions that were being mounted during that decade, all following in the wake of Stanley Kubrick's monumental 2001: A Space Odyssey, which dominated the imaginations of countless young people, not to forget all the future filmmakers who were influenced by it.

Dark Star also inspires prose like that, because watching it now feels like a shot of adrenaline. It's just so fun to watch a film that was made by young people with tremendous promise, much of which they began to deliver upon within the next few years.

The Criterion synopsis reads in part: "Onboard the titular spaceship, a team of chilled-out astronauts cruise the cosmos, blowing up planets while dealing with a host of crises ranging from a runaway pet alien (played by a beach ball) to a renegade bomb with a mind of its own."

Yes, come for the beach ball, but stay for the movie.

Do you feel this content is inappropriate or infringes upon your rights? Click here to report it, or see our DMCA policy.
Dan O'BannonJohn Carpenterscience fictionThe Criterion Channel