Now on Blu-ray: AND THEN WE DANCED, The Story Behind the Story 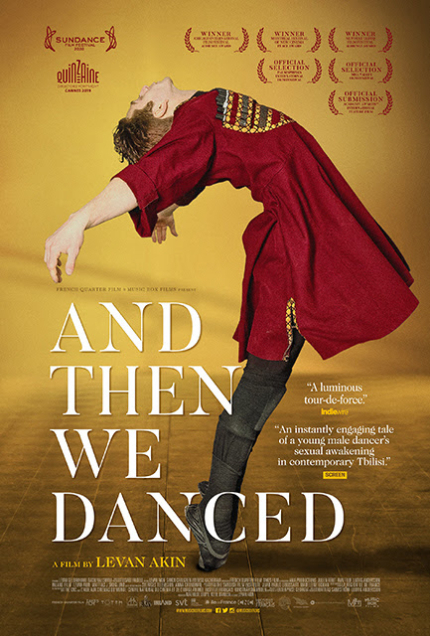 A fresh, second viewing on Blu-ray confirmed my impression that And Then We Danced is "easy to watch and difficult to ignore," as I mentioned in my review earlier this month, when it debuted on VOD.

The film revolves around Merab (Levan Gelbakhiani), a teenager who yearns to escape his existence in modern-day Georgia. We learn more about Merab as he realizes fundamental truths about himself, including his sexual orientation, which will make it very, very challenging for him to remain in the conservative country, where the LGBTQ community is very strongly discouraged from existing.

The Blu-ray edition from Music Box Films features an excellent, scene-specific audio commentary by director Levan Akin, in which he explains many aspects of Georgian culture that were not readily apparent to me during my first viewing. Akin talks about common family dynamics in Georgia, the lack of privacy among families and neighbors, and notes all the many locations that were used. He also pinpoints the pivotal scene that came first in his head, before he had even decided on what the story would be.

Because of the film's LGBTQ themes, some potential cast and crew members declined to participate, or, if they did, requested anonymity for fear of severe repercussions. Some locations were not made available to them for similar reasons. The script itself changed as the filming progressed, reflecting director Akin's readiness to adapt to changing circumstances and the various abilities of the many first-time actors.

Even with all the changes, some beyond his control, Akin stuck firmly to certain scenes that were pivot points in the story. He also stuck firmly to his creative intent. It's a good listen.

Also included are a nice variety of extras for fans of the film:

-- "A Film We Made With Love, Interview with Director Levan Akin (11 min.)
-- Filmmaker Q&A from the New York Premiere in February 2020 (24 min.)
-- Georgian Dance Tutorial with Levan and Bachi (the two male leads show off their authentic moves; 3 min.)
-- Cast Dance Party (it looks like they're dancing around someone's apartment -- very fun! Runs 1:39)
-- Theatrical Trailer

The Blu-ray also includes several trailers for Music Box Films releases. It's a fine presentation of an above-average drama that tears at the heart while uplifting the spirit.

Now available on Blu-ray and DVD from various online retailers. It's also still available to stream and support your local theater. For more information, visit the film's official site.

Do you feel this content is inappropriate or infringes upon your rights? Click here to report it, or see our DMCA policy.
Ana JavakishviliBachi ValishviliGeorgiaLevan GelbakhianiMusic Box Films

More about And Then We Danced