Be proud and loud. First, though, know yourself.

And Then We Danced
The film is available to watch on a variety of VOD platforms on June 2, 2020, including iTunes, GooglePlay, YouTube, and Vudu, via Music Box Films. It will be released on Blu-ray and DVD on June 23.

Driven by a lifelong desire to succeed, Merab appears to be thriving, despite the inherent challenges of his surroundings.

A member of the local Georgian Dance Ensemble, the teenager, portrayed adroitly by Levan Gelbakhiani, trains intensely every day, all day, before working diligently as a waiter in the evenings, returning home to share a meal with his family, which includes his grandmother, his mother, and his older brother David, who all live together in a modest apartment in a working-class neighborhood. Then he retires for the night, gets up in the morning, and does it all again.

What does Merab want? Frankly, it's not clear. His longtime dance partner, Mary (Ana Javakishvili), talks longingly about returning to London, where she plans to resume her studies, while Merab appears fully occupied, if not completely obsessed, with the idea of becoming a professional dancer in the national company. That seems to be the likeliest route for him to escape his existence in the modern-day country of Georgia

Early hints in the film suggest that the culture in George leans toward homophobia, but what bearing this has on Merab is not made clear until a new dancer, Irakli (Bachi Valishvili), arrives in class. With his strong personality and bold dance moves, Irakli makes an immediate impression upon his new classmates as well as the hardline teacher, who very quickly decides that Irakli will partner with Mary on a particular routine, instead of Merab.

Naturally, Merab is disgruntled with the decision, but his reaction is complicated by his own feelings about Irakli. Merab and Mary are ostensibly a romantic couple, but Merab treats her primarily as a pal, rather than a possible paramour, which adds further fire to the smoke-signals that are arising from the chemistry between Merab and Irakli.

Told nearly entirely from Merab's perspective, And Then We Danced peers inside the soul of a young man who is not accustomed to examining himself. Certainly, Merab is not given to talking about himself and/or his feelings with anyone else. Why, then, is he even a dancer? What does he truly want out of life? As he rapidly approaches a point in his life when he must start making choices that will define his life, he is ill-equipped to express himself.

Levan Gelbakhiani and Bachi Valishvili are wonderfully fluid dancers who create empathetic and relatable characters. Ana Javakishvili is mostly left on the outside, but brings warmth and a great sense of movement as the devoted girlfriend who also dances.

Writer and director Levan Akin (Certain People, The Circle) keeps the film gliding between hard-edged dance sequences, domestic drama, and the restorative joys of friendship and intimacy. And Then We Dance concludes on a well-earned note of authentic pride, an attitude that informs the entirety of the experience, which is easy to watch and difficult to ignore.

Also of interest, from BBC News: LGBT Rights: The film about gay love shaking up Georgia. 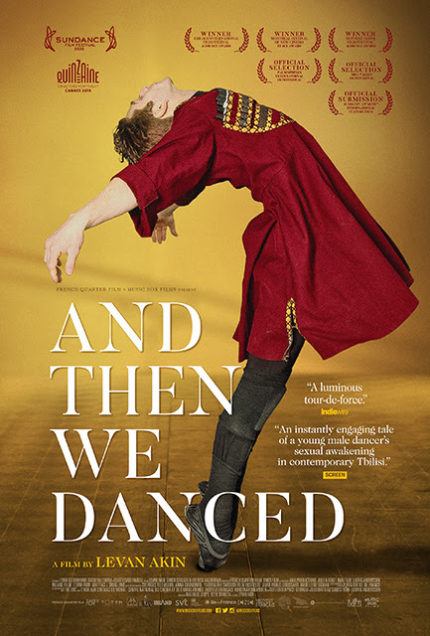 Do you feel this content is inappropriate or infringes upon your rights? Click here to report it, or see our DMCA policy.
Ana JavakishviliBachi ValishviliGeorgiaLevan AkinLevan GelbakhianiSweden

More about And Then We Danced