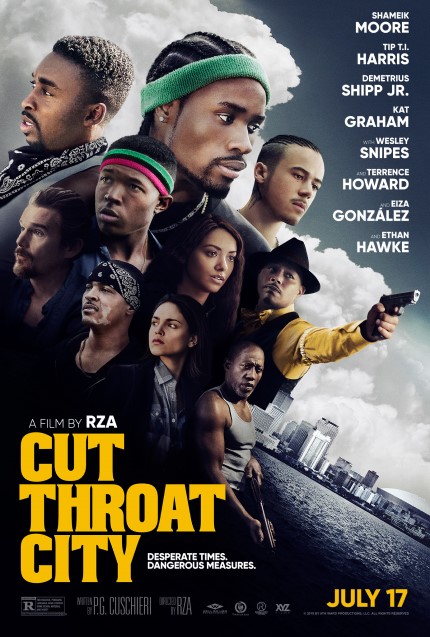 Prepare for a very hot month.

Directed by RZA, Cut Throat City will now be burning its way onto more than 300 theater screens across the U.S., beginning on July 17, 2020.

Per the official release: "Originally slated to make its world premiere as an official selection at SXSW 2020, the feature will be one of the first films to open wide theatrically as theaters begin to reopen nationwide. Well Go USA plans to release the film on 300 screens across the U.S.

"Cut Throat City is the story of four boyhood friends in New Orleans' Lower Ninth Ward who return after Hurricane Katrina to find their homes decimated, with no jobs and no help from the Federal Emergency Management Agency (FEMA). Out of options, they reluctantly turn to a local gangster, who offers them one shot at turning their situations around - by pulling off a dangerous heist in the heart of the city. When the job goes bad, the friends find themselves on the run, hunted by two relentless detectives and a neighborhood warlord who thinks they stole the heist money."

(Full disclosure: XYZ Films serves as executive producers and handles worldwide sales. Todd Brown, who is this site's founder and editor, serves as Head of International Acquisitions for XYZ Films. Todd Brown was not involved in the writing or editing of this article.)