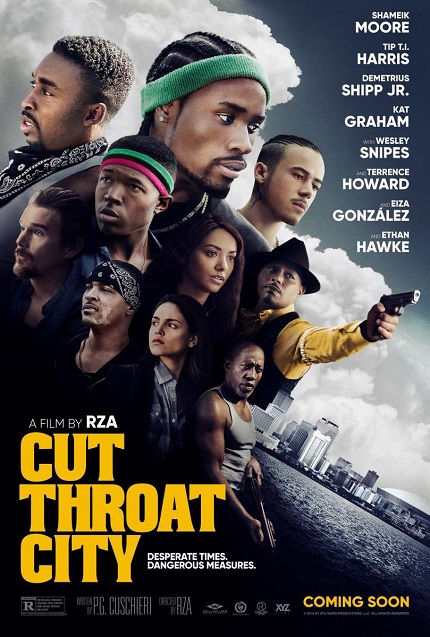 Hip-hop wunderkind RZA is known for two things: being the brains behind the influential Wu-Tang Clan and for his unabashed love of martial arts films, which he managed to channel in his directorial debut, The Man With The Iron Fists (2013). Now, RZA steps away from chopsocky action to deliver Cut Throat City, a comparatively sedate crime/social issues drama.

The story centers on four childhood friends struggling to get by in New Orleans in the wake of Hurricane Katrina: comic book artist and defacto leader Blink (Shameik Moore), low-level drug dealer Miracle (Demetrius Shipp Jr., still the splitting image of Tupac Shakur, whom he played in All Eyez on Me in 2017); wannabe musician Andre (Denzel Whitaker) and dog trainer/token white guy Junior (Keean Johnson). The four are residents of the Lower 9th Ward; after being hit especially hard by the Hurricane and with the city pretty much abandoned by authorities, they have no other choice but to take part in a lucrative casino heist masterminded by neighborhood kingpin Cousin Bass (a fast-talking, no-nonsense T.I.).

So far, it looks like we’re in for a solid, if routine, crime flick but the robbery itself ends up happening in a flash during the first 30 minutes; the remainder of this two-hour film deals with the aftermath, and that’s when RZA suddenly pivots from a genre exercise to a drama with something to say about the city’s economic and social downturn after the disaster.

Once the shift happens, RZA unleashes a top drawer supporting cast: Eiza González as the tough cop chasing the foursome, Ethan Hawke as a jaded city councilman (clad in a bathrobe in his first scene and looking hungover, he’s the splitting image of Dude Lebowski), Wesley Snipes as a backwoods hermit, habitual scene-stealer Rob Morgan as a cowboy informant, and a late-inning Terrence Howard as a Bible-quoting crime lord all chip in to keep your interest, even if most of them are extended cameos. Ultimately, it’s Hawke who stands out the most as a boozing politician who genuinely wants to help the city but has pretty much given up; he seems to be a villain at the outset, but the actor succeeds in giving him layers despite his few scenes.

RZA widens his canvas as much as possible in order to show the aftereffects of Hurricane Katrina; with no federal aid and pretty much left to fend for itself, the city hit rock bottom and everyone was affected, from city officials to law enforcement to locals. NOLA was on the verge of becoming a no man’s land, and RZA’s aim is to portray this while at the same time offering a ray of hope, of coming together and overcoming adversity.

It’s a noble effort, but P.G. Cuschieri’s screenplay gets bogged down by a multitude of subplots all vying for equal screen time. With so much going on, it’s easy to lose track of so many allegiances, betrayals and motivations; the foursome at the center of the story are left behind by their own movie and one is left thinking that this material would have been better served as a TV series (even if HBO’s Treme already beat it to the punch).

Cut Throat City wants to be both a heist film and a portrait of post-Katrina New Orleans, and while it’s not quite there as either one, it remains watchable thanks largely to its stacked cast and RZA’s competent direction. While it’s definitely a case of 'could have been so much more,' it never cheapens what the city went through and has something to say, even if its methods are a bit clunky.

Cut Throat City will be released in theaters on Friday, August 21. Visit the official site for more information.

Do you feel this content is inappropriate or infringes upon your rights? Click here to report it, or see our DMCA policy.
Demetrius Shipp Jr.Denzel WhitakerEiza GonzálezEthan HawkeKeean JohnsonRZAShameik MooreT.I.Wesley Snipes