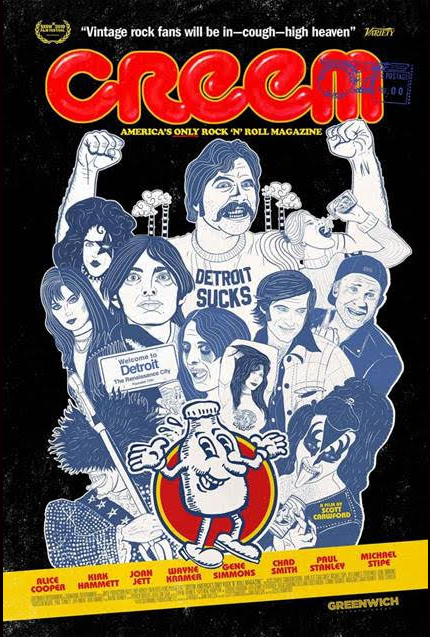 Hey, kids, here's a rock doc that's as much about the doc as the rock! (Yes, dear reader, I am probably much, much older than you.)

First published in 1969 and billing itself as "America's only rock n' roll magazine," Creem established a beachhead that was pitched at a much more raw level than Rolling Stone, giving exposure to bands that, especially in the mid to late 70s, revved my teenage engines. (?!) Its writers included the likes of Lester Bangs, Dave Marsh and Cameron Crowe, the latter of whom paid homage to Bangs' fierce passions in his own film, Almost Famous (2000).

Once I learned about the magazine, I looked forward to buying it every month at one of my local record stores, so I could read about new bands and enjoy saucy reviews and articles that were anything but corporate-driven. By the early 80s -- or, about the time Lester Bangs died tragically young -- my tastes changed and I lost track of the magazine, which continued publishing in its original form until 1989 and then revived for a while in the 90s.

Directed by Scott Crawford, Creem: America's Only Rock n' Roll Magazine documents the publication's rise and fall, as well as its influence upon later generations. The official synopsis explains further:

"Capturing the messy upheaval of the '70s just as rock was re-inventing itself, the film explores CREEM Magazine's humble beginnings in post-riot Detroit, follows its upward trajectory from underground paper to national powerhouse - spotlighting iconic features, interviews, and anecdotes along the way - then bears witness to its imminent demise following the tragic and untimely deaths of its visionary publisher, Barry Kramer, and its most famous alum and genius clown prince, Lester Bangs, a year later. Fifty years after publishing its first issue, 'America's Only Rock 'n' Roll Magazine' remains a seditious spirit in music and culture."

Greenwich Entertainment will be distributing the film and has now released a trailer, which you can watch below.