In 2014, directors Jonathan Milott and Cary Murnion presented their debut feature, Cooties (starring Elijah Wood, Rainn Wilson and Alison Pill), a humorous take on the zombie subgenre with infected kids and their teachers as the victims.

Later on, in 2017, the directing duo made Bushwick, a peculiar Children of Men-like action thriller with several long takes, in which Dave Bautista and Brittany Snow’s characters try to survive an unsettling armed attack to the titular Brooklyn neighborhood.

Now Milott and Murnion are back with another genre effort, this time approaching the home invasion and the revenge subgenres. In Becky, the titular young girl (played by Lulu Wilson) is mourning the death of her mother and even though her father (Joel McHale) is planning to get married again (Amanda Brugel plays the fiancé and Isaiah Rockcliffe her little son), she’s not ready at all to move on.

At the same time we meet these characters, we also follow a group of inmates lead by a neo-Nazi (Kevin James doing something completely different from his comedic roles), during the execution of their escape plan.

Eventually the two subplots come together at the family’s lake house, which turns out to be the final destination for the dangerous fugitives in order to complete their master plan (they need to retrive a mysterious key); however, the antagonists will have to deal with an unexpected challenge, once things get ugly and the tough and clever Becky decides to fight back in very violent ways.

On Friday, June 5th, Becky will be in Theaters, Drive-Ins, On Digital and On Demand; I spoke with its directors to support this release.

ScreenAnarchy: With your new movie BECKY you’re landing into the home invasion subgenre, after dealing with zombies in COOTIES and with the action genre in BUSHWICK. How was your approach this time to a subgenre that is basically about how you can’t feel safe even in your own home?

Jonathan Milott: Yeah, I think we just like exploring different types of films, we don’t like getting locked to one genre, I think because we’re film lovers in general, we love horror, we love comedies, we love everything, so as filmmakers we kind of want to do everything.

We really loved the premise of this film, we thought we could bring a lot to it. One of our favorite genres is revenge movies, films like Oldboy, we think of Sicario as a revenge movie, [Quentin] Tarantino’s films. We think that there’s just so much that happens in revenge films that we love in terms that there’s the visual side of it, taking a film that we love watching just as a film but that, especially in the films that I just mentioned, there’s also so much more to them and you can take this really intense idea of revenge and really explore a lot of more unethical and thematic questions.

In the revenge part of the movie, the young girl Becky is always one step ahead of the criminals, it’s basically like HOME ALONE with her plans and tactics but obviously very, very gory. How was the process to deal, together with young actress Lulu Wilson, with the violence of the film?

Milott: Yeah, we were really lucky to work with Lulu, we were writing the film and watching her in all her amazing work up until that point. Quite frankly we were scared because the subject matter in Becky and the violence is brutal, it’s intense, but I don’t think you can compare it to some of Lulu’s other films, something like Sharp Objects or The Haunting of Hill House; Sharp Objects 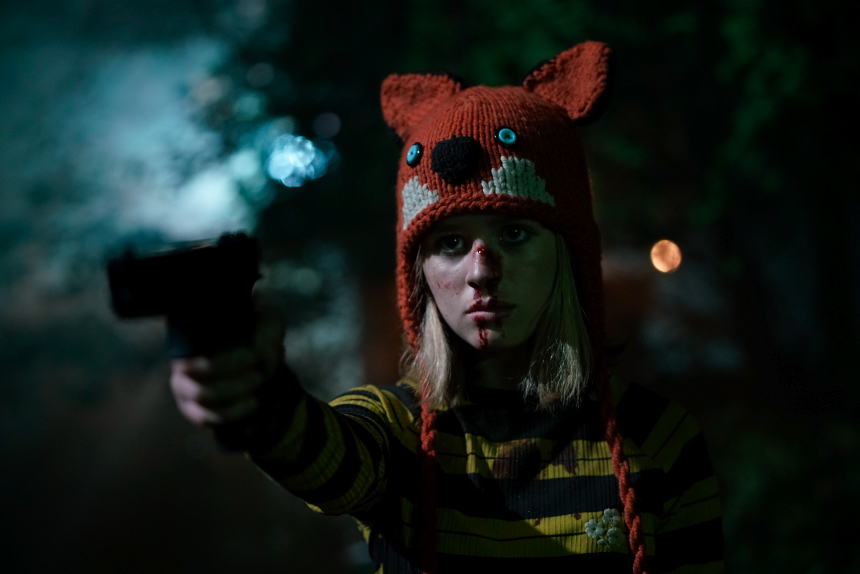 Becky is dealing with loss, grief, trying to move on. In all of your movies the human side is very important. What were your thoughts on Becky’s background when you read the script?

Milott: Well, I think it was just a big part of making you want to follow her, you want to understand why a character doesn’t necessarily just run away; I think that was one of the real challenges of the script, it’s like “why doesn’t she just run away?”, so we wanted to make sure that she had a motivation, she was in the role where she had everything taken from her so she really had nothing else to lose. Just looking at that from the perspective of a 13-year-old or a younger person, we felt that if you take everything that a person loves away from them, what else do they have left to lose? And why wouldn’t they lash out and fight back rather than just running away?

So I think that that was something that we really tried very carefully to build into the first act of the film, that you see what kind of person she is, that she is slightly rebellious but she also has some loving in her, she has some warmth, but she also had a lot taken from her and she continues to have things taken from her so when she flips the switch it’s motivated in the world of the film.

I noticed that there’s at least a couple of things that connect your three movies. One is that the protagonists fight back during a life-or-death situation. And the other is that there’s always a scene involving someone on fire...

[Both laugh out loud].

Is this a coincidence or is there something behind this?

People fighting back... all of our films are genre films and I feel that’s one aspect of a genre film, is someone who is weak in some way, whether be physically, mentally or just of where they are, they have to become something that they haven’t then. That comes across in all three films. Yeah, we like the idea of the person who might be considered not as strong becoming the strongest person, I think we love that theme of going through things like that.

You have Kevin James as an antagonist, as a neo-Nazi, which is obviously a role that you wouldn’t think of him playing. How was the process to cast him?

Milott: Yeah, definitely. We just loved the idea of working with a character that was charismatic, lovable and known. Everybody knows Kevin James as this lovable guy from the other films and other TV he’s done, so taking someone that has that charisma, that you might typically trust or has the sense of just innate trustworthiness, and putting him in a role where you don’t necessarily think he’s going to start doing Nazi hate and torturing, for us it was important to have that contradiction and play with that, that idea that is like “wait a minute, I can’t believe that this guy is doing that”, because I think that’s just more typical of the way it would be in the world: you don’t have people like Dr. Evil necessarily, at first they can come across as nice or even logical but then there’s a twist to it. 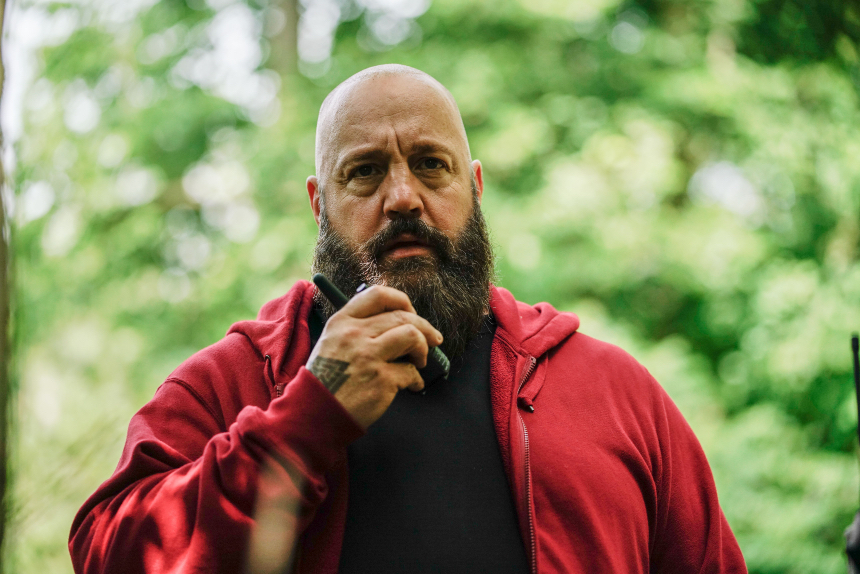 Especially with this character there’s a lot of ambiguity, we never find out what he’ll open with the key, which is similar to that briefcase from PULP FICTION. Was leaving stuff for the audience’s imagination to fill in was something particularly important for you?

Milott: Yeah, definitely. There was something we talked a lot about as we were developing the script with the writers, the producers and the financers, it was always the question that... we were clearly on the side that you don’t ever find out, we want the mystery, and in the end like most good MacGuffins it’s not really the point and it’s almost if you find out it’s a letdown, like if you find out what’s in the briefcase in Pulp Fiction it’s kind of like if you take something away from the film. I know it can be frustrating to some viewers, you know, they want all the answers but to us it was very clear that we never wanted to know what it was for... if it was just for money, well, that’s kind of like a letdown, if it was something magical or mystical then that’s almost too stupid. So let it stay a mystery and just be the motivation to the characters.

Murnion: But one thing to add here: we know what the key is for, we know but we don’t want anyone else to know.

I’m sure in BUSHWICK those long takes were technical challenges. In BECKY, where there any equivalent notable difficulties?

Milott: [Laughs] I feel like that’s yet the other thing that’s in all of our films: we take on technical challenges that are pretty extreme for filmmakers. With Bushwick, yeah, it was more clear that it was the long takes which was the challenge. With this, there were so many things in terms of the location, filming in the woods, there’s bugs, there’s animals, snakes, there’s also filming the kids, which is difficult because you have so little time to work with them. We were filming with animals, we had two dogs, they had to do very specific things. And then we had stunts, we had prosthetics, we had effects. Each one of these things just add a lot of time to filming. When we have all those on top of each other, it becomes a lot of the challenge to get what you want to execute.

You have a plan going into filmmaking as a director and you’re excited to express yourself in a certain way and then the realities of what you can accomplish in it fade out with filming day, so you have to make a lot of compromises, a lot of changes, and usually you have to do this very quickly on the fly and you have to prioritize what is the most important thing that you want to express and how you want to express that, because in the end you have to lose some really cool kill scene or some really cool stunt or a really cool prosthetic, because you just don’t have the time and the money to execute them. I think there were a lot of challenges for this but hopefully you don’t realize when you’re watching it and just feels like a great film that was a lot of fun to make. But definitely a lot of challenges.