Review: THE BRAVEST, Chinese Firefighters Arrayed Against a Ferocious Foe 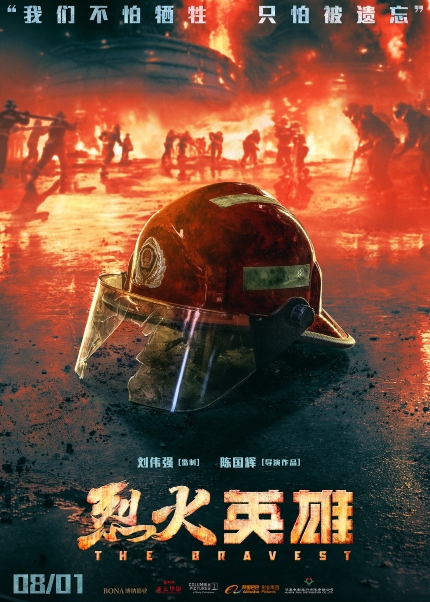 Where were you when the world caught fire?

The Bravest
The film is now streaming on Starz. It is also available for purchase or rental through various On Demand platforms.

Rightly honored and respected for their brave actions on behalf of others, firefighters have earned a celebrated place in the pantheon of heroes. Ron Howard's Backdraft (1991) established a gold standard for capturing the dangerous, courageous activity of fighting fires on film, while also embracing melodramatic tropes that resonated with audiences.

The picture in China is vastly different, however. According to Quartz, "China has a three-tier firefighting system. The country has 130,000 official, national fire-fighters, who are controlled by the Ministry of Public Security. Local governments and public institutions also have firefighters. And finally, businesses who have a high risk of fire are also obliged to set up firefighting teams. ... Top-tier firefighters of the state public security ministry ... usually serve for just two years."

Inspired by a disastrous series of explosions in the port city of Tianjin, China that killed 173 people and injured hundreds of others in the summer of 2015, Tony Chan's The Bravest (originally titled Lie huo ying xiong) puts a positive, patriotic face on what happened in its fictionalized re-telling.

What initially grabbed my interest was the depiction of a large-scale response to a disaster in the making. The titles of director Tony Chan's two previous films -- Bride Wars (2015) and Fall in Love Like a Star (2015) -- do not suggest that he might have the capacity to mount an exciting action picture, but he is well-versed in the portrayal of relationships on screen, and that helps to buff the melodramatic scenes to a polished sheen.

We see romantic relationships in crisis, families torn apart, and friendships tested. We also see patriotic duties expounded upon, with much emphasis on the need for sacrifice at the expense of one's own life. Really, it's not much different than umpteen war movies in which the necessity of becoming a hero by dying is encouraged, revered, expected, and/or demanded.

The multitude of fire scenes are staged with bravado and consummate skill, aided by visual effects that may have kept participants safe, even as they edge beyond the boundaries of easy belief. The actors' gusto in portraying the heroes covers over the excesses, for the most part.

The fire scenes are interspersed with panic in the streets, as crowds of citizens endeavor to flee the city, which is under dire threat of total annihilation if the chemicals in the huge containers stored at the firesite explode. The resolve of the people is put to severe test, and only a relatively small number respond in an unselfish manner.

As for the cultural shift in overall motivation for fighting, fleeing, and rendering aid, it's quite bracing, especially outside a strictly military context. In the U.S., I'm accustomed to the idea that some people choose to accept the obligation of heroism on a voluntary basis, mostly because they are motivated by a desire to protect and rescue others. In The Bravest, dozens and dozens of firefighters stand ready to give their lives in behalf of the national interest; they are going to war against the enemy fire.

Firefighting requires extraordinary courage and bravery on the part of individual men and women, whatever the motivation. Sure, The Bravest is filled with melodramatic flourishes that can sometimes make the teeth ache with their overarching desire to inspire admiration and applause. But firefighters are heroes through and through, no matter where they're from or why they're doing it.

Summing up: Firefighters deserve to be lionized and The Bravest works very hard to do just that.

Do you feel this content is inappropriate or infringes upon your rights? Click here to report it, or see our DMCA policy.
ChinaDu JiangHuang XiaomingTan ZhuoTony Chan