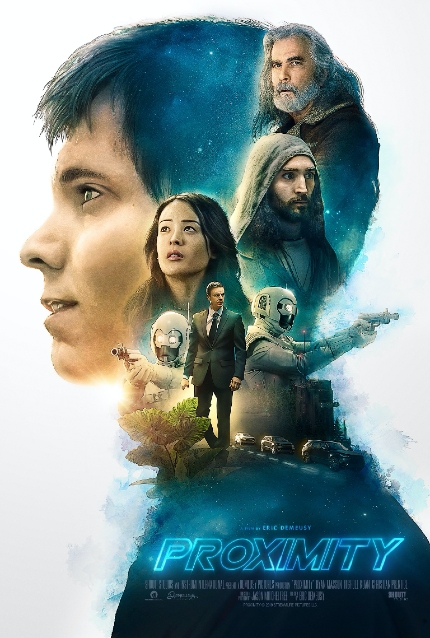 Make no mistake: invaders from outer space are on their way. But what do they want?

Proximity
The film will be available to watch at home on May 15 via a variety of VOD platforms, including AppleTV, Amazon, VUDU, GooglePlay, PlayStation, XBOX, hoopla, Fandango Now, DirecTV, Comcast Xfinity, Spectrum, Cox and AT&T U-verse.

Beginning in 1979 before flashing forward to the present day, writer-director Demeusy allows Big Ideas to dictate the story, which follows young scientist Isaac (Ryan Masson) in the days before, and the weeks after, he is abducted by extraterrestrials.

Before his claims of abduction, he appears to be a promising young man. He is employed by NASA JPL in Southern California, which has a well-deserved reputation as a place where only the brightest minds are employed, and he gets along with his friendly coworkers.

Something has been troubling Isaac for some time, however, and so an authority figure in his life kindly suggests that he start a video-diary and see if that helps. Sheepishly, Isaac begins lugging around a bulky, old analog-video camera, and lo and behold, it's not long before it allows him to capture what he describes as an alien abduction, which leaves him with a strange, fitful new ability.

Before fully talking it out with his friendly coworkers, however, Isaac rushes to upload the video to a popular web site, and his life quickly tilts out of control. Gripped by an obsession that he can't really describe, much less explain, he continues to make baffling, snap decisions, one of which is actually good, in that he meets Sara (Highdee Kuan), who is likewise an introvert and, more pertinently, a fellow alien abductee.

From there, events not only continue tilting out of Isaac's control, but also push toward the edge of disbelief for viewers. Even as common sense is sometimes tossed out the narrative window, though, filmmaker Demeusy's experience in animation and visual effects come to bear.

With credits ranging from the title sequences for Netflix's Stranger Things and HBO's Game of Thrones to the dazzling accomplishment of his short film Star Wars: The New Republic Anthology, Demeusy makes certain that the visual effects look to be top-notch in Proximity, which lends credence to the story, even when the characterizations run thin and certain actions defy logic.

The actors, including Masson, Kuan, Christian Prentice, Shaw Jones (as a government agent) and Don Scribner (as an older sage), are a likable bunch who bring as much authenticity as possible to their characters. Even when things go haywire, they give mankind a rooting chance.

Summing up: Thoughtful, serious-minded and filled with visual delights, sci-fi fans of all ages should have a blast.