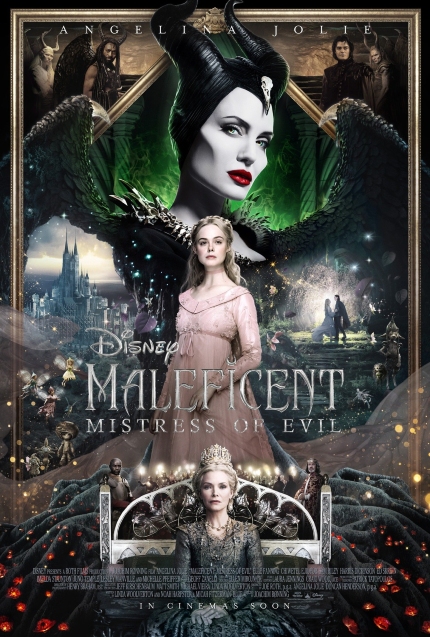 This looks great! Now, about that story ... and those characters ...

Crafted by writer Linda Woolverton, Disney's Maleficent (2014) cast a strong feminist spell, in my opinion, functioning first as a prequel, so as to explore the true motivations for why the titular character wasn't very happy, and then telling the bulk of the fairy tale known as Sleeping Beauty from her perspective.

Powered by Angelina Jolie's strong lead performance and lightened by Elle Fanning's joyful embodiment of Maleficent's goddaughter, Aurora, the film did not quite measure up to the heights suggested by their portrayals. Still, Maleficent drew mobs of happy people to theaters and rang all the right financial bells to justify another high-dollar sequel, which arrived in theaters last fall to diminished, though still hardy, box office returns.

Recently, Maleficent: Mistress of Evil debuted on the Disney+ streaming service, which seems to be the natural home for it. Certainly it's a colorful and diverting affair, and fully deserving of its Academy Award nomination for makeup and hairstyling, and also meriting attention for its exquisite costuming and production design.

Director Joachim Rønning, who helmed the invigorating Kon Tiki (2012) and the splendiferous Pirates of the Caribbean: Dead Men Tell No Tales (2017), as well as previous action pictures Bandidas (2006) and Max Manus (2008), all with his creative partner Espen Sandberg, here takes solo command on this sequel ship and shows that he is in full control of the visual spectacle on display. Indeed, Maleficent: Mistress of Evil is overfilled with lovely creatures and amazing landscapes that are busy to the point of distraction.

That all makes complete sense in view of the story, which is utter nonsense and entirely devoid of characters who can stand and/or fly on their own recognizable limbs. That leaves Jolie and Fanning stranded without much to do beside periodically emote and make the viewer wish they had something meaningful to cry over, which applies as well to the equally fine actors Michelle Pfeiffer, Chiwetel Ejiofor and Ed Skrein.

(Side note: I do not recommend watching this movie after seeing Elle Fanning's deft, magnificent performance in The Great, a television series that is definitely only for certain adults, since it shows what the actress can do when she is given the opportunity to portray a flawed, fascinating, and completely empathetic character.)

Maleficent: Mistress of Evil features a very tidy and professional appearance and looks very, very good on my small screen at home. It's a true fantasy movie that passes the time pleasantly and probably won't leave any permanent dents in the minds of young children.

Do you feel this content is inappropriate or infringes upon your rights? Click here to report it, or see our DMCA policy.
Angelina JolieDisneyDisneyPlusElle FanningJoachim Rønning