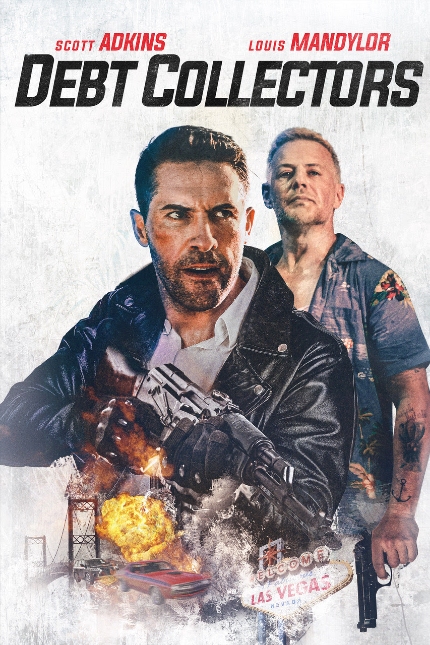 From the title alone, you might imagine Debt Collectors to be a nightmare come true, following polite people who daily use the telephone to exact vengeance upon those poor souls among us who have fallen behind on their debt payments.

Oh, how wrong assumptions can be!

Instead, Debt Collectors sees the return of Scott Adkins and Louis Mandylor as French and Sue, who previously teamed up in 2018's The Debt Collector. This time, "they're summoned to Las Vegas to collect from a dirty casino owner, who happens to be a vicious ex-lover of Sue's," according to the official synopsis. "Meanwhile, a notorious drug kingpin is on the warpath to kill French and Sue to avenge his brother's death. Facing danger from all angles, the pair will have no other choice but to fight their way out of an explosively dangerous situation."

Ace director Jesse V. Johnson returns at the helm. What sort of action can we expect? In action movies, especially, it's better to show than to tell, so check out our exclusive clip, as French and Sue go on the road in their pursuit of people who, we sense, could actually pay their debts, but choose not to do so. Due to their own bad choices, they are about to reap the consequences. First, though, French and Sue must decide on their plan of attack. ...

Via Samuel Goldwyn Films, Debt Collectors will be available to watch on May 29, 2020. Prepare for the bruising ahead by watching our exclusive clip below.

Do you feel this content is inappropriate or infringes upon your rights? Click here to report it, or see our DMCA policy.
Jesse V JohnsonLouis MandylorScott AdkinsUS