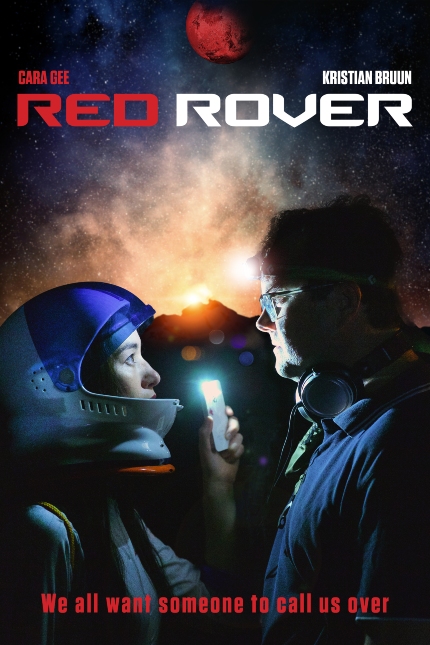 Updated with new trailer, which is even better than the first teaser. Now it gets more directly to the premise upon which the relationship between two people is built, while suggesting that it's less of a comic drama, as i wrote previously, and more of a romantic, sci-fi themed movie.

Watch the new trailer below. Here's my original post.

Having problems in your personal life? Why not go to Mars?

The first enthralling moments of the Red Rover trailer tease an adventure in space before giving way to something more familiar, a comic drama about a down-on-his luck fellow who dreams of escape. But wait! The trailer also shows him taking action to improve his situation.

"Damon (Kristian Bruun) spends his waking hours searching for that elusive something," according to the official synopsis. "Whether it's for deeper meaning, love, or just 'treasure' on the beach with his metal detector, but to no avail.

"So when Damon meets an offbeat musician named Phoebe (Cara Gee) handing out flyers for a one way trip to Mars, a bond quickly forms. She's going to help him find that thing he is looking for by sending him 33.9 million miles away, even though what he needs might be right in front of him."

The trailer itself fills in other plot details, such as Damon's living situation: he's relegated to the basement of a house he owns, in which his ex-girlfriend and her current boyfriend live. (Do I even need to say 'Yikes!' to that?) Also, the trailer reveals several lovely shots, suggesting that director Shane Belcourt has a good eye for framing and composition. Meghan Heffern and Anna Hopkins also star.

The light-hearted tone is very appealing. And it's from Canada, so it's got that going for it. You can watch the trailer below. Red Rover premieres On Demand May 12 from Indiecan Entertainment.

Do you feel this content is inappropriate or infringes upon your rights? Click here to report it, or see our DMCA policy.
CanadaCara GeeKristian BruunShane Helcourt