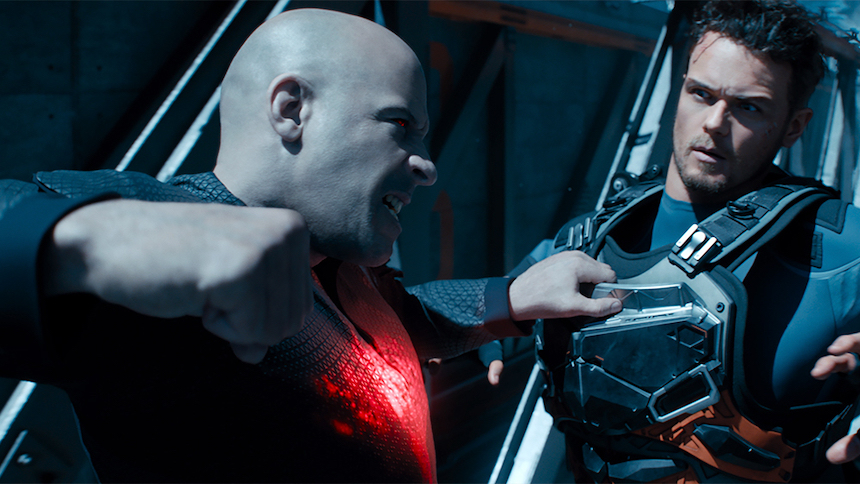 Diesel hasn’t been content to simply sit back, co-star in the long-running, seemingly endless, billion-dollar grossing Fast & Furious franchise (the ninth entry won’t see the inside of a coronavirus-free multiplex until next spring now), and collect multi-million-dollar paycheck after multi-million-dollar paycheck well into the next decade. Time and again, Diesel has tried repeatedly to carve out a viable, standalone, non-Fast & Furious series or franchise, first with the uneven, fitfully entertaining Riddick series (Pitch Black, The Chronicles of Riddick, Riddick), then with The Last Witch Hunter (sequel supposedly forthcoming), and now Bloodshot, the big-screen adaptation of one of Valiant Comics’ better-known superhero characters, hopefully, the first in a planned shared cinematic universe. Whether Valiant Comics’ hoped-for cinematic universe actually happens, though, depends completely on Bloodshot’s box-office success.

Diesel may be many things, but he’s certainly aware of his limitations as a performer. He can emote, but only across an extremely limited range. While he officially passed the half-century mark in terms of age and years, he can still handle most of the physical demands of an action-oriented role like Bloodshot (or his equally follicle-challenged stunt double can).

Bloodshot introduces Diesel’s character, Ray Garrison, as he’s cosplaying Army Ranger in a super-secret, stealth, search-and-rescue mission in Mombasa, Kenya. He dispatches a squad of brown-skinned terrorists in less than a minute, rescues a bloodied hostage, and jets back home to spend quality time with his beautiful, blonde wife, Gina (Talulah Riley), in a seaside Italian hotel (pre-coronavirus outbreak). Before you can say or type “fridged,” Gina exits Bloodshot moments before a mildly perturbed Ray permanently loses consciousness (no) thanks to a bullet to the head.

Bloodshot, of course, doesn’t end there. That’s just the beginning for Ray and through Ray’s point-of-view, the audience. A newly resurrected Ray, minus any head scars or trauma, awakens in the super-secret lab of an ultra-high-tech company, Rising Spirits Technology (RST). Minus any memories, Ray sits up and listens as Dr. Emil Harting (Guy Pearce), RST’s CEO, drops more than a few exposition bombs in his general direction. RST specializes in tech-enhanced prosthetics for returning, wounded soldiers, a noble endeavor, especially for a profit-oriented corporation.

Once jagged, disjointed memories of Gina and the Talking Heads-loving psycho-killer, Martin Axe (Toby Kebbell), who murdered Gina and Ray violently resurface, Ray/Bloodshot breaks free from RST’s semi-secure facilities and goes on an obligatory mission of revenge. So far, so predictable, but director Dave Wilson, working from a screenplay credited to Jeff Wadlow (Truth or Dare, Kick-Ass 2, Never Back Down) and Eric Heisserer (Arrival), takes Bloodshot into an entirely different, if no less welcome, direction. Bloodshot only strays slightly from predictability, leaning heavily into both the character’s little-known comic-book origins and the Marvel Cinematic Universe’s Captain America trilogy (specifically Captain America: The Winter Soldier) and the theme of misused, abused (super) soldiers unwittingly serving corrupt corporate masters or off-brand governmental agencies.

Not that Wilson or his screenwriting team explores the super-soldier theme with any depth or subtlety. Bloodshot isn’t that kind of comic-book, superhero adaptation. It’s action first, second, and last, usually aided by fast-mo/slo-mo beats, the best CGI a limited budget can buy (mostly passable, right up until Bloodshot tries to top Captain America: The Winter Soldier’s iconic elevator scene and fails badly, proving that cut-rate visual effects can only get you so far).

An earlier scene involving a tunnel, armored cars, and an overturned flour truck stands out as an action-heavy highlight, transforming Diesel and his stone-like, hypertrophied physicality into the equivalent of a horror-themed boogeyman. Dialogue wise, Diesel isn’t asked to do or say much. He delivers his dialogue with the usual gravelly-voiced gravitas. That’s left for everyone else in the cast, including Pearce’s Harting, Eiza González’s KT, another super-enhanced soldier (artificial lungs), and Lamorne Morris’ British-accented Wilfred Wigans, Bloodshot’s plug-and-play, god-like computer hacker and stereotypically fast-talking comic relief.

Do you feel this content is inappropriate or infringes upon your rights? Click here to report it, or see our DMCA policy.
BloodshotEiza GonzalezGuy PearceVin Diesel