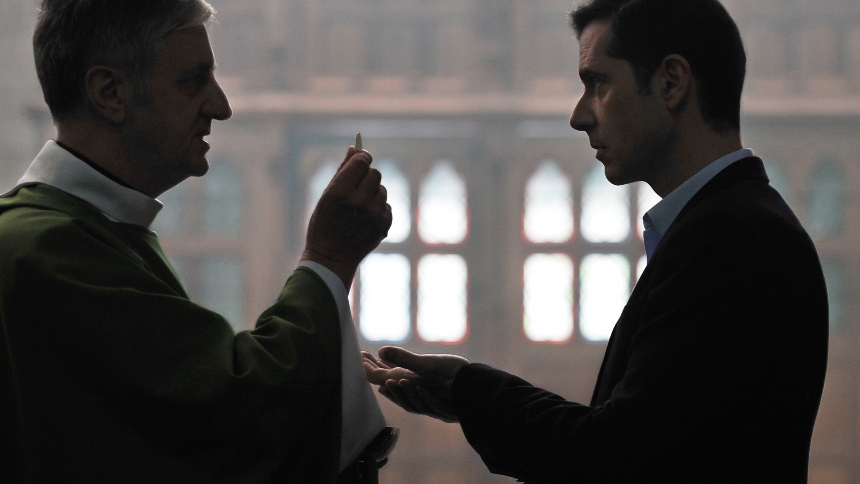 Though it is not the easiest film to watch under any circumstances, François Ozon's drama endeavors to pierce the veil of secrecy that has long enveloped the Catholic Church and its handling of child abuse allegations.

Carefully noting that it is a work of fiction, the film is based upon real-life events whose effects are still rippling through the lives of countless people throughout the world.

Alexandre Guérin (Melvil Poupaud) appears to be the picture of success. He is successful in his professional life. He is happily married to a loving and supportive mate. They have multiple children, who all appear to be happy and well-adjusted. They are happy and devoted in their religious activities. As an important religious event looms, however, Alexandre remains troubled at heart, and finally he can no longer remain silent.

Alexandre was sexually abused as a child by a priest.

Presented in a straightforward, dry fashion, Alexandre comes forward to a representative of the church and recounts his sexual abuse. Then he waits for a further response, which is not forthcoming any time soon, as the Church appears to practice a code of silence to keep things quiet.

As Alexandre is forced to deal with mounting frustration, the focus shifts to Francois (Denis Mehochet), another victim of childhood sexual abuse by the same priest, and then to yet another, Emmanuel (Swann Arlaud). Each victim differs in how they have dealt with the abuse into their adulthood. Francois is a crusading, fearless journalist who sheds much-needed public light on the case. Emmanuel is desperately struggling, but comes to the conclusion that he can no longer remain quiet.

Francois and Emmanuel are not as successful as Alexandre, at least from a financial standpoint, yet they are all seeking help for dealing with the emotional pain and harsh memories that have stained their lives. Francois, who has left the Church, forms a support and advocacy group, while Alexandre, who remains in the Church, advocates for change from within.

As director Ozon acknowledges in a post-screening discussion/debate that is included on the Blu-ray from Music Box Films, he has primarily focused on women in his career, but here he explores the male psyche, how it can unravel, how it can suffer, and how it can rebuild.

It's a subject that could lead itself to sensationalism, but the film stays away from that, remaining thoughtful and measured as it casts its eye upon wounds that remain open and painful for far too many victims.

The Blu-ray includes the discussion/debate, featuring Ozon, a member of the Catholic diocese, and a leader of the support and advocacy group. Things get fiery during the extended discussion. Also included are deleted scenes, lighting and costume tests, a featurette on recording the music, and a poster gallery.

The film is available to rent or buy via various Video On Demand platforms, including Amazon, iTunes, Google Play, and Vudu. Visit the official site for details.

Do you feel this content is inappropriate or infringes upon your rights? Click here to report it, or see our DMCA policy.
Denis MénochetFranceMelvil PoupaudMusic Box FilmsSwann Arlaud. François Ozon

More about By the Grace of God