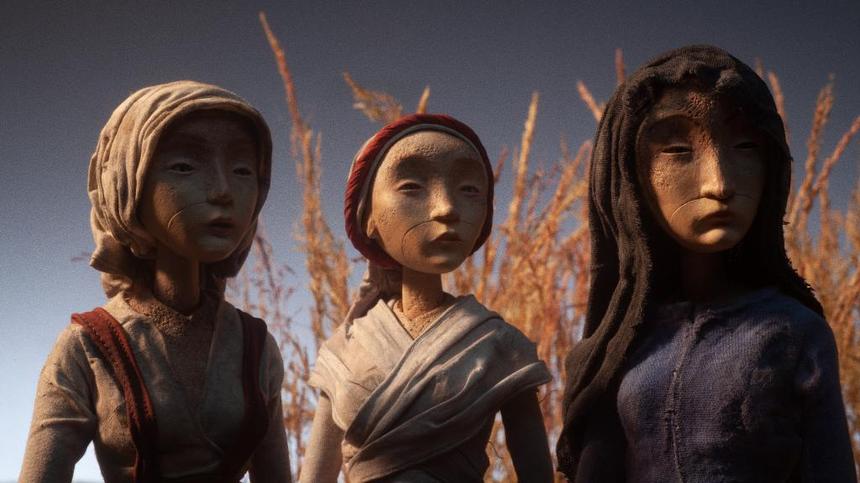 I'll admit as a programmer that I'm biased, but I do think anyone attending a film festival should seek out the shorts. They are the unsung gems of any festival line-up, the places where filmmakers start out, where they experiment, where ideas take root. You can show off to your friends that you saw some now-famous director's first film years ago, or you can see major acting talent that often appears in the film. Or, like short stories, some of the best, most beautiful, joyous, strange, and heartbreaking work can happen in just a few minutes.

Below are some capsule reviews of a few short films at Miami Film Festival, hopefully coming to one near you (or online) soon.

{Black Title Here}: James is not having a good day off. The cable guy is coming, his best friend and a random guy just show up at his house, his ex-girlfriend is having a major crisis while his current girlfriend is making demands, all while James keeps getting nosebleeds and has to change his shirt several times. Director and writer Sev DeMyers gives us a hilarious and slightly dark look at how things can compound in a day, as one man is just trying to keep everyone happy. There's great use of colour in the production design, and the actors all have great comic timing.

Grab My Hand: A Letter to My Dad: This is a beautiful story of friendship and love, as director and writer Camrus Johnson uses voiceover narration and animation to tell the story of his father and his father's best friend. The animation is a joy to watch, each frame moving with the story, guiding the audience to feel this loving relationship, the connection between these men, and the sorrow that it to come. With an equally beautiful score by Frazier Smith, it's a poignant tribute that will leave anyone misty-eyed.

Powerful Little Island: The Caribbean islands have been subjected to major environmental damage in the past several years due to climate change, and the small nation of Dominica was particularly hard-hit by Hurricane Maria. Directors Ezra Remer and Alexander Musca visit tyhe island and document the stories of the residents and their plan to revitalize the economy. They cover a lot in a short amount of time, capsulizing how planetary changes are having disastrous effects on the most vulnerable, and how the vulnerable are fighting back.

Push the Point (Rated T for Toxic): What starts out as a fun night of online gaming between four friends quickly becomes a conversation about fandom, toxic behaviour, and the limitations of online 'discussions'. But this conversation is in song. Short musicals are rare, so it's great to see one that finds a way to communicate through music in a space we wouldn't normally expect. It's blackly comedic as well as fun, as the film's team gives each character distinction and makes space for a variety of viewpoints, all in a crisp package that makes you want to sing along.

Sororal: Three sisters who live in together in a house on a lonely plain are warned that the sea will soon invade the land, and they shouls escape while they can. And yet, they hesitate, as a strange rash starts to appear on their skin. This was my personal favourite of the shorts, using a kind of fairy tale or mythological form of storytelling which felt both ancient in form and contemporary in topic. Directing/writing team Frédéric Even and Louise Mercadier use haunting and effective stop-motion animation in a creepy fable, expressing the dynamics of the sibling relationship, attachment to place, and the need for sacrifice.

Still: In this Chilean short, Mili has gone to her late grandmother's small town by the sea to help. On w alk while wearing her grandmother's coat, she meets an old fisherman who seems to recognize her; but that can't be ...  or can it? Director/writer Constanza Majluf builds her ghost story piece by piece, working in a non-linear timeline to express how memories are not just about the past, but also the present and the future. Ghosts are all around us, and possibly even inside us, and we must make space for them to communicate.

Third Trinity: An overwhelming concern for expectant mothers is how they will maintain their own identity, and career, once their child is born. In this short, a santera gives her pregnant a very strange prediction that seems on the surface to be impossible. As the daughter struggles with doubts about her abilites to be the right kind of parent, this prediction takes on a poetic form, intended as both instruction and reassurance. Director Yara Travieso imparts a tale of old wisdom for a modern life.

Do you feel this content is inappropriate or infringes upon your rights? Click here to report it, or see our DMCA policy.
Grab My Hand: A Letter to My DadMiami Film Festival 2020Powerful Little IslandPush the Point (Rated T for Toxic)SororalStillThird Trinity{Black Title Here}