Miami 2020 Review: AND THE BIRDS RAINED DOWN, Life and Love in Isolation 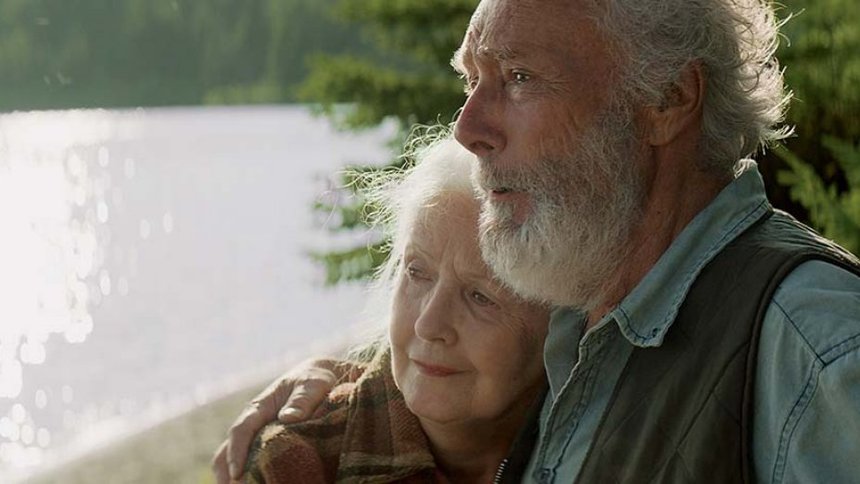 Maybe it's the current state of the world, but I often find myself thinking about running away from civilization, or at least, moving to the outermost fringes off it. Finding some activity to generate a small income, living in peace with just a few close friends, only dealing with the world when absolutely necessary. Then I wonder how long I could survive, not so much without certain urban comforts, but what if I got really sick? What about old age? Would I suddenly find myself desperate to return, kicking myself for bad choices and mistakes, or would I go gently into that dark night?

Québecoise filmmaker Louise Archambault's latest feature is a meditation on what it means to live apart, on the need for friendship and love, and the nature of existence when the world seems to have forgotten you. And the Birds Rained Down is a beautiful meditation on meaning lost and found in our twilight years, how we cope with past trauma, memory, and pain, the joys and sorrows found in small moments, and the need for companionship.

Three elderly men, Charlie (Gilbert Sicotte), Tom (Rémy Girard), and Ted (Kenneth Welsh), live in rural Québec, earning some money by growing pot for loca dealer and hotel manager Steve (Eric Robidoux). Tom sometimes plays music at the local bar, and Ted paints (though never lets anyone see his work). Together, they garden, and go skinny dipping with their dogs in the nearby lake. This routine seems good enough for them, but each man is hiding a secret pain that they keep buried deep inside.

But things are coming to disrupt their tranquility. Shortly into the film, Ted dies in his sleep from heart failure. Steve has brought his long-lost aunt (Andrée Lachapelle), institutionalized against her will for most of her adult life, to the area, asking the men to look after her. There's also a photographer, Raf, who is doing a project on a forest fire that devastated the region decades before; she wants to speak to Ted, whose entire family was killed. Meanwhile, another fire is approaching, which threatens the men's solitude, and illegal marijuana trade.

For the aunt, who gives herself the new name of Marie Desneige, this is her first experience of freedom - she can go where she wants, speak to whom she wants - and it is intoxicating as well as frightening. For Charlie and Tom, these are their last days. They chose this life, and have until this point had satisfaction, but there are disappointments as well. Tom regrets not working harder at his music career. Charlie feels the lose of intimacy. And we are shown, through his paintings, what Ted endured for many years: the trauma of losing his family in the fire is exhibited in these haunting works, beautiful and terrifying to look at.

Romance blossoms between Charlie and Marie, as he takes her under his wing. For her, this is her first kiss, and her first romance (though she is not a virgin, but her encounters were less than ideal). For Charlie, this is the connection he has craved, something friendship cannot provide. Archambault presents this with care and sensuality (rare with older lovers), starting with firelit conversations that make them look and feel like teenagers, and when sex does happen, with all the grace that would be afforded to a younger couple.

On the other side is Tom, who, as stated, seems to somewhat regret his lifestyle choice; Girard's music interludes are heartbreaking, adding trememdous weight to already heavy songs by Leonard Cohen and Tom Waits. There is no jealousy on Tom's part, merely resignation on what he might have acheived. He looks at Steve (who seems happy to run an empty hotel and have the occasional affair) and encourages him not to become a hermit. And Tom decides that being alone, as he is, might not be worth it, and that decision is both frightening and oddly peaceful.

Archambault neither romaticizes nor criticizes the hermits' choices; the land from which they make their existence is beautifully shot, yet not a garden of eden (the looming threat of fire, of the present, make it a semi-paradise that is possibly about to be lost). And the Birds Rained Down is tender without being sentimental, and explores the darkness hiding in the corners of the light, while keeping us mostly in the sun.