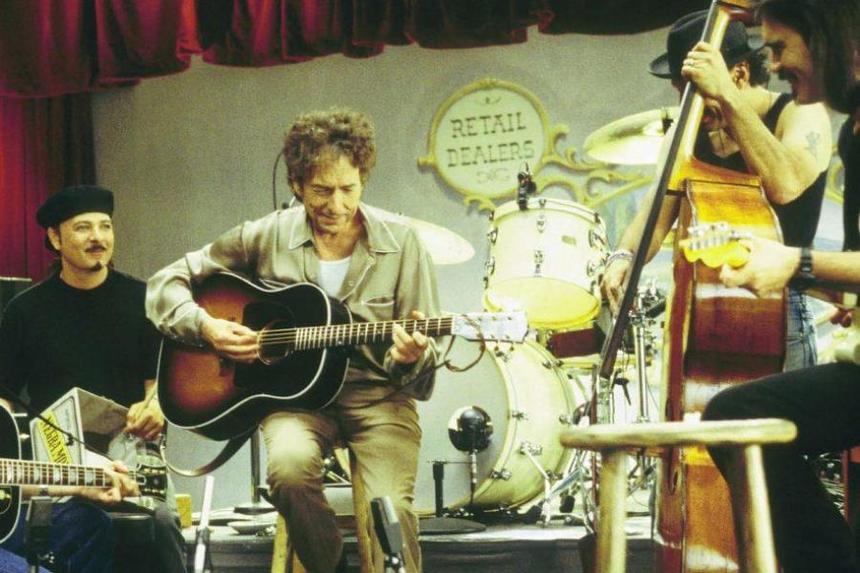 Bob Dylan's filmography might not be as long or as revered as other popular musicians who have dipped their toes in cinema; but when he does make a film, it's something to watch. The second of the two feature films that he's written, Masked and Anonymous, is getting a blu ray release from Shout Factory this month. It's a strange and moody film that feels like a ballad and moves like theatre, with an impressive list of stars centering around the presence of America's great songwriter, in a story that feels oddly prescient despite being made nearly twenty years ago.

This was Larry Charles' feature directorial debut; it might seem odd that the future director of Borat, The Comedians, and several episodes of Curb Your Enthusiasm would start with such an ecletic (albeit somewhat darkly comic) script, but this is a story, and a creation, more about process than product. With a cast that also includes Jeff Bridges as a stand-in for every music journalist Dylan had the misfortune to speak with, Penélope Cruz as a supersticious girlfriend, Giovanni Ribisi as a beleagured soldier, Luke Wilson as a cynical friend, Fred Ward as a drunk, Val Kilmer as a philosophical animal wrangler, Mickey Rourke as a goverment power player, Angela Basset as a former lover of the dictator, along with nearly every spoken part being played by someone of name, it seems that process, the act of discovery, was irresistable. The film was also released at a time of a great Dylan revival; his album Love and Theft, released a few years before, was considered a return to form, and it was only a few years before I'm Not There.

Bob Dylan plays Jack Fate, a musician who's been in prison for an untold number of years. The United States is currently a banana republic, run by a dictator who appears like a mythic figure in posters, while much of the populace lives in poverty. Uncle Sweetheart (John Goodman) and Nina Veronica (Jessica Lange) want Fate to play a benefit concert to help war victims (though really to help themselves), and as Fate makes his way to the event, he encounters various strangers, friends, and enemies who either help or hinder him.

I feel as though that plot summation is both too much detail and insufficient at the same time. Really, any kind of plot summation of this film will fall short; the journey is too convoluted, too complex,, and argubaly, follows not so much a linearality as a winding, twisty, never-ending mobius strip. It doesn't so much bring up a lot of questions (though it does) as asks its audience to linger in various scenes, allowing the dialogue to wash over you without wondering too much (or that such wondering will lead you to your own scene in your head).

For indeed, this plays out like an extended Dylan ballad, a strange story that one could imagine a troubadour recounting over the course of an evening or two, in between sips of whiskey. One can imagine floating in and out, examining each scene as its own individual poem, complete and alive. While there was technically a screenplay (written under false names by Dylan and Charles_, much of the dialogue is improvised. As the cast openly admits, they did the film in order to work with Dylan (fair enough), and the content and its quality did not seem to be a concern.

As stated (and discussed in the extras), this film is more about the process than the end result, and that shows in both positive and negative ways. The actors are clearly enjoying playing off each other and off Dylan, playing with his words and ideas even if they aren't fully formed or don't make much sense. Certainly some of the actors and characters are much stronger than others (Bassett, even in only one scene, is a cornerstone of the film, while Bridges, Goodman, and Lange bring decades of experience to what otherwise might be caricatures). And Dylan himself (admittedly not a great actor) is poking gentle fun not only as himself, but at his persona - not so mucht he persona he projects when he performs, but that which has been invented around him over the years.

In Dylan'd filmography, Masked and Anonymous plays with the singer's image; he is self-aware, but he refuses to give anything about himself. This might leave some viewers a bit perplexed, and slightly put off by the strangeness of the film. This is not a film about Dylan, but more a film about what people think of Dylan, Dylan playing with his image, and playing with a bunch of people who just want to be around him. It deserves more of a cult status than it has, and might be the truest adaptation of a Dylan song: the carnivalesque, the madness, the guilt, the nostalgia, and the enigma.

Certainly, the blu ray transfer is excellent (though it was a fairly low-budget film to begin with). There are the expected extras - the film's trailer, a commentary by the director, a 'Making Of' featurette that was done at the time of the shoot featuring Charles and some of the actors (sadly not Dylan) talking about various aspects of the film and story.

Deleted scenes are often ones that contain no information that further the plot (or at least narrative points that end up not being explored, hence the scenes being cut). And the deleted scenes here fall under that umbrella; however, these ones enrich the already balladic tale with more layers to the story. One shows Laura Harring approaching Dylan in a bus station, offering some time and conversation while he waits for his bus; another showcases one of the many songs that Dylan and his band performed (many ended up on the cutting room floor) that hints at more of the story regarding Jack Fate's family (perhaps keeping him under a cloud of mystery was part of the allure); and a pretty fascinating one with Jeff Bridges' character telling a story about his family. I'm guessing the dialogue was improvised, but Bridges manages to keep it within the stylistic realm of the film, which makes for an interesting watch.

There's also a recent interview with Charles, and it's always interesting to listen to a filmmaker looking back on a film he made so long ago, what he remembers about the process, and how he views it not only on its own, but as part of his and the other participants' ouevre. It's worth it just to hear how the film came about in the first place.

Masked and Anonymous will be released on Blu-ray by Shout Factory on March 10th.

Crowd Fund This: Help Build INSIDE and Black Mansion Films