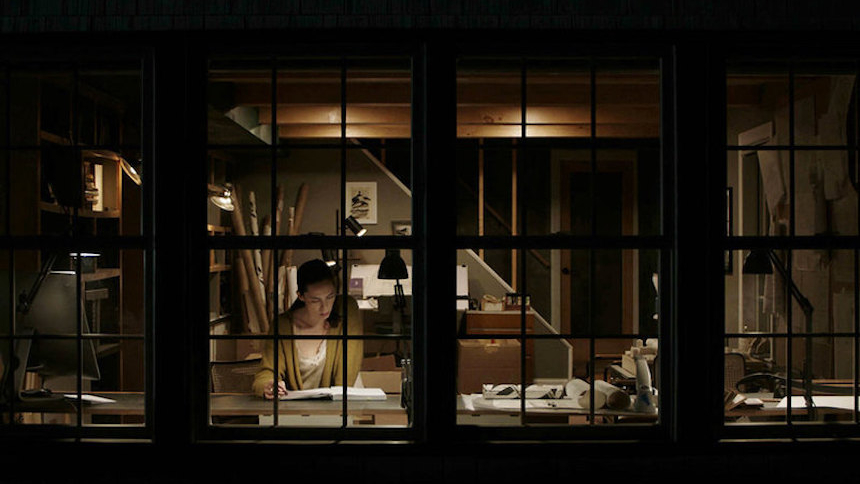 The haunted house/supernatural sub-genre often turns on grief and its discontents, transforming and externalizing its varied, contradictory effects into literal and literally terrifying manifestations of psychological ruptures or breaks from objective reality.

It's difficult, if not impossible, to find a better recent example than David Bruckner's (The Ritual, Southbound, V/H/S, The Signal) deeply unsettling supernatural horror film, The Night House. Filled with all the expected - and some unexpected - jolts, shocks, and scares typically associated with the haunted house/supernatural sub-genre, The Night House benefits from Bruckner's finely calibrated direction, Elisha Christian's moody cinematography, and Rebecca Hall's utterly committed central performance as a schoolteacher profoundly mourning the seemingly inexplicable, unimaginable loss of her architect husband to suicide.

Left alone in an empty, too-big-for-her lake house, Hall's character, Beth, spends the days after her husband Owen's (Evan Jonigkeit) suicide toggling between the five stages of grief (i.e., denial, anger, bargaining, depression, acceptance) while numbing herself through copious amounts of alcohol, over-sleeping, and aimlessly wandering the house Owen built for her in a daze. Not even her best friend Claire's (Sarah Goldberg) concerns over Beth's emotional and psychological health can spur Beth to begin the difficult process of healing over the devastating loss of her husband.

At night, the house seems to come alive with vivid, discomforting manifestations of her unresolved grief: The stereo turns on by itself, playing their favorite song, knocks and bumps on doors and windows awaken Beth at odd hours, and disturbing images and sounds of another, almost identical house on the other side of the lake begin to infiltrate her dreams, leaving her increasingly distraught and disturbed.

With her every day (and night) reality seemingly slipping into a waking nightmare (shout-out to the idea of "night paralysis" as a throwaway, one-and-done diversionary tactic), Beth turns metaphysical detective, hoping to find the "why" behind Owen's suicide in the belongings left behind at the lakehouse. Beth's curiosity turns into obsession when she discovers a photo of another woman who resembles Beth on Owen's phone (he most definitely had a type).

Owen's notebooks reveal not just the floor plans for their lake house, but another, mirror or reverse house, occult scribblings, and ominous warnings about containing a malevolent supernatural presence. It's almost enough to drive Beth, a woman who defines herself by her beliefs in scientific rationality, material reality, and a non-belief (atheism) in the supernatural, into the equivalent of a psychological break or breakdown. As the clues pile up, both subtracting and adding to the mystery of Owen's death, Beth is forced to confront harsh, unimaginable truths about her late husband.

There's a creeping sense of disorientation, dislocation, and ultimately terror in Beth's discoveries about Owen: She didn't really know the man she loved for more than a decade. It's a shock in and of itself, the central realization that love and the trust that comes with love doesn't necessarily confer knowledge of the other person in a relationship.

Of course, The Night House doesn't linger too long on Owen's potentially damning secrets, not when Bruckner and his screenwriting team, Ben Collins and Luke Piotrowski (Super Dark Times, Siren), have a willing audience to repeatedly scare into quivering submission (and it does, more often than not). The maximally crafted sound design certainly helps in that respect, as does a muted color scheme meant to evoke Beth's fragile mental state, and Bruckner's unobtrusive, efficient direction that puts story and character first and visual stunts or gimmickry second.

Minus a rushed third act where the reveals about Owen and the mirror house spill out a fast and semi-confusing furious pace, leaving more questions than answers in its wake, The Night House hinges almost completely on Hall's central performance. Always a committed performer regardless of the underlying material, Hall gives her absolute all as Beth, giving voice and expression to Beth's journey through a macabre grief process.

Hall's unafraid of playing Beth as a partially unsympathetic character, letting Beth's obsessions color and dictate her often volatile mood. Given the genre, it's a performance that will likely go unnoticed, receiving little if any recognition during year-end discussions of awards, but it's easily one of the best, most memorable performances of Hall's under-sung career.

Do you feel this content is inappropriate or infringes upon your rights? Click here to report it, or see our DMCA policy.
David BrucknerRebecca HallSarah GoldbergSundance 2020

More about The Night House