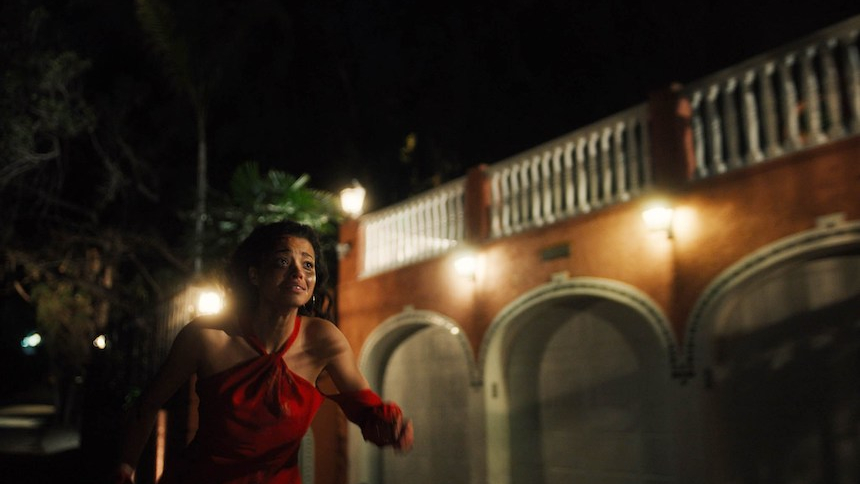 The #MeToo movement meets the monstrous personification of toxic patriarchy in Run Sweetheart Run, a bloody, gore-filled horror film with more than shocks, scares, and cheap thrills on its delightfully demented mind.

Run Sweetheart Run easily could have focused on the surface, cathartic pleasures of the horror genre, but in Feste's hands, it's that and a whole lot more. Upending, subverting, and reinventing over-familiar genre tropes, Feste delivers the kind of film, regardless of genre, that works on every level (e.g., dramatic, thematic, and emotional).

Cherie (Ella Balinska), the "first and final girl" we meet in Run Sweetheart Run's opening scenes practically represents our new normal. She works as a legal assistant/secretary by day, goes to nursing school at night, and comes home to a toddler sans partner every night. She's ambitious, a striver, hopeful that her efforts will eventually pay off in a better home and more materially comfortable circumstances for her daughter.

Having recently extricated herself from a no-good, bad romantic relationship, Cherie's all but ready to enter the dating pool. Before she can create an OkCupid profile or swipe right on Tinder, her boss (Clark Gregg), sets her up on a too-good-to-be-true date with one of his ultra-wealthy clients, Ethan (Pilou Asbæk). If the first date turns into a second date, ad nauseum, Cherie can get her man and guaranteed upward mobility courtesy of Ethan's millions or billions.

Spoiler alert: Her date goes from bad to awful to terrible when Ethan physically assaults her in his palatial mansion overlooking the city. With her face bloodied, her body bruised, and her dress irreparably torn, Cherie literally runs for her life over, through, and under the streets of a nighttime Los Angeles (LA).

The police, the authoritarian symbol of class and racial oppression in Feste's take, fail to provide Cherie with protection. Instead, they deliver her directly into Ethan's hands, a major tip-off that at least in Feste's vision of modern LA, wealthy, powerful men of the Caucasian persuasion can and do control the levers of power with just the invocation of their name. Waters part and jailhouse doors open, leaving Cherie completely vulnerable and Ethan, gifted by Feste with almost supernatural tracking abilities on the prowl for his latest victim.

What starts as a seemingly simple stalk-and-chase horror-thriller veers into both familiar and unfamiliar territory once Ethan's true identity comes into much clearer focus. With few, if any, resources except her own ingenuity and cleverness, Cherie sets out to get help, first from her ex-boyfriend and his brother, dealers in illicit drugs and guns both, and later, when Ethan proves to be a far more formidable opponent than anyone ever imagined, in the sanctuary of a Catholic Church (mild spoiler alert: it's not the sanctuary Cherie imagines or hopes it will be), and an underground group led by an enigmatic woman intentionally added to Run Sweetheart Run to parallel real-world domestic violence survivors and shelters. Feste engages in an ambitious, if no less welcome, amount of world-building, wildly expanding Run Sweetheart Run's mythology along with Cherie's emotional and geographic journey.

Feste doesn't flinch or elide the violence Ethan perpetuates on his victims (though she cheekily breaks the fourth wall multiple times), often to an intentionally uncomfortable degree, keeping Cherie covered in copious amounts of blood from the moment she emerges from Ethan's home through the last few scenes. Cherie's extremely inconvenient monthly menstruation provides Feste with the opportunity to exploit the equivalent of real-world repulsion (body-horror) in male horror fans who otherwise have little, if any problem, with prodigious amounts of blood in their R-rated horror films.

In Feste's subversive genre take, blood represents both life and danger for Cherie (since her blood will give her away). Blood also becomes another tool Cherie can use to survive her long, dark night of the soul, though Ethan's promise (survive the night, survive the hunt) proves predictably empty for Cherie and, by extension, the audience, though Cherie's "final girl" status guarantees a survive-and-advance scenario by the film's end.

While Feste's makes her goals and themes clear from the start, Feste's apparently innate tendency towards didacticism creeps into Run Sweetheart Run hand-in-hand with her attempts at world-building. Subtext too often becomes text and text too often becomes a fifty-foot high neon sign saying "Read Me!" and "Interpret Me!"

Subtlety and nuance aren't in Feste's toolset, at least where Run Sweetheart Run is concerned, but that's only a problem if you prefer your horror with more, not less, subtlety or nuance. For everyone else, Run Sweetheart Run delivers what the genre can and often does best: visceral thrills and real-world commentary.