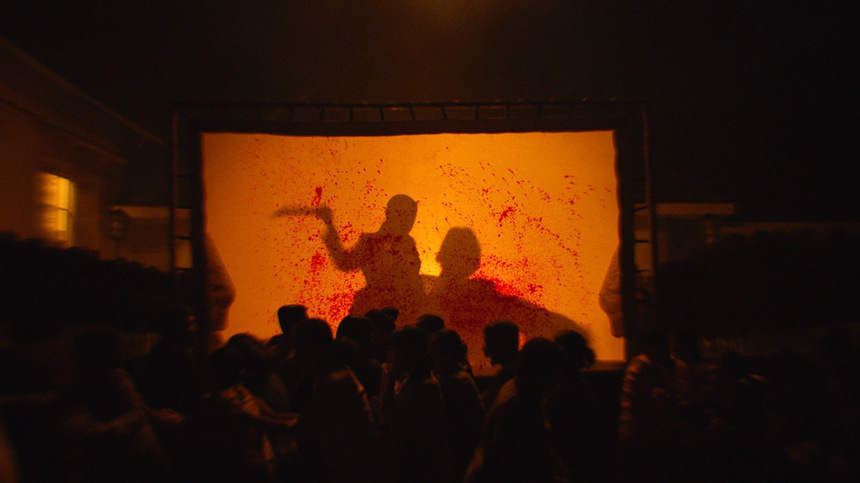 After being attacked at her job as a toll booth operator by a frenzied stranger, Maya (Tara Basro) retreats into her new job working at a discount clothing stall to try to separate herself from the trauma of the experience. Who was the man that attacked her and why? He seemed to know some things about her that she didn't even understand. Curious about the event and the fact that her attacker mentioned her rural hometown, Maya decides to return to her roots with her friend Dini (Marissa Anita), to see if she really left anything behind, including a rather large house that she's surely in the line of succession for. When the pair arrive, they discover a village largely untouched in by the decades that have passed since Maya left, but there's something sad and sinister about her ancestral home, and it's coming for her.

After discovering a curiously overpopulated cemetery, including a couple of recent additions in the two days since they've arrived, Maya and Dini start asking around about what exactly is going on. Under the guise of conducting research on the ancient Javanese art of shadow puppetry, Wayang, they stumble across Ki Saptadi (Ario Bayu), who appears to be the village headman, but a mysterious air about him tells them to keep their distance.

It turns out that a curse has befallen the village, and no healthy children have been born in the years since Maya left, which doesn't make sense because she's seen a trio of young girls intermittently throughout her trip. Curious about reason, Maya and Dini start to dig deeper, without realizing they may be digging their own graves. Perhaps Maya is closer to this curse than she could possibly know, will she escape with her life, or will she fall victim to the town's vengeance?

Director Joko Anwar has been at the forefront of an Indonesian genre wave since his first films made landfall internationally fifteen years ago. He's explored everything from action to noir in the years since with amazing results, but it's his recent horror work that has garnered the most attention. 2017's Satan's Slaves made huge waves on the festival circuit and remains one of the scariest films of the last decade, and with Impetigore (Perempuan Tanah Jahanam), he goes back to the frights in the rural milieu that he seems to be so comfortable with.

Anwar seems to be at his best when he takes genre devices and uses them to explore and exploit Indonesia's rich culture and history. With Satan's Slaves and now Impetigore, he has reached back into the island nation's pre-colonial history and traditions to create a unique experience that couldn't have come from any other place on earth. The art of wayang, which is over one thousand years old, is expertly engaged as vehicle for terror in Impetigore, and an integral part of the witchcraft that informs the film's scariest moments.

Impetigore takes the viewer to many dark places, both in terms literally and figuratively. The house that Maya returns to, believing it to be part of her inheritance, has long since been abandoned, and has become overgrown and drenched in shadow. Much of the action in Impetigore takes place by candle light or is projected through shadows, like the wayang theater scenes that turn a joyous celebration of culture and native dramatics sinister.

Anwar's script also explores the consequences of leaving behind a community for supposedly bigger things. Maya has forgotten her roots, also both literally and figuratively. A huge part of the film's thematic through line comes from getting Maya to reconnect with her own past. Like many rural kids who try to make their way in the big city, Maya doesn't see herself as a country girl anymore, but the country never forgot her, and it's not going to forget the sins to which she is connected either. It will take its own bloody vengeance on her, or whoever gets in its way.

While I did eventually love what Impetigore becomes, it takes a long time to blossom. Nearly an hour passes before the central conflicts make themselves known, with the film spending a lot of time building atmosphere, certainly more than necessary. Then, once things start to ramp up, a huge chunk of the actual story is somewhat clumsily dumped in a last minute flashback that might've been much more effective if it'd been delivered in pieces along the way. The way it was delivered felt very rushed, and that didn't really match the pacing of the rest of the film and was one element that could've used a bit of polish.

A title like Impetigore also brings with it some pretty hefty expectations for an audience, and those looking for a splatter film will likely be somewhat let down. The film certainly has a few gruesome moments, but the original title, which translates to something like Woman of the Cursed Land, is far more representative of the film we get, if less exciting. There is plenty of blood, and a few glimpses of grue here and there, but the vast majority of the horror is implied, and effectively so.

Joko Anwar continues to carve out a niche for himself as one of the world's leading genre auteurs, going from strength to strength, he's got an incredibly impressive body of work already, and seems to only get better as he becomes more ambitious. Impetigore is a film that will certainly resonate with genre fest audiences, and hopefully the success of Satan's Slaves and Impetigore will bring new converts to worship at the altar of Anwar.