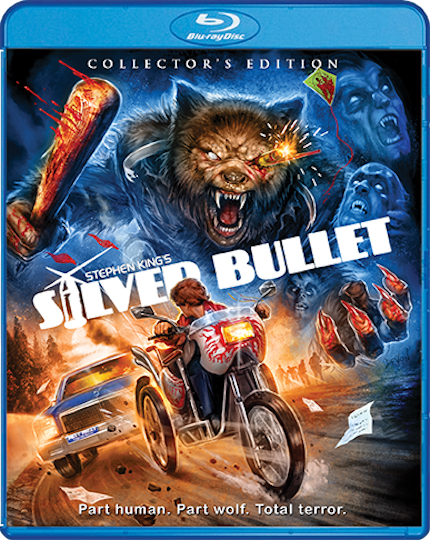 It's been a long, long time since I've seen the strange werewolf adaptation of Stephen King's novella, "Cycle of the Werewolf." Like many kids in the '80s, I'm sure, I saw this film way too young. There were images that stuck with me and terrorized my elastic mind, particularly the yellow smiley face kite coated with slick, red child's blood.

Anyway, titled Silver Bullet for the big screen, the film, like many of Stephen King's stories, revolves around a child in peril. In this case, it's young paraplegic Marty, played by Corey Haim. His sister Jan (Megan Follows) has the job of having to look after him most of the time. Uncle Red (Garey Busey) comes to hang out with the kids, especially Marty, to be a stand-in father figure and kind of a bad influence.

That's all fine, but the trouble is that the small town in which they all live is being stalked by a gruesome killer. Heads literally roll! Someone or some thing is dispatching people, and Marty thinks he knows who. He suspects the local reverend played by a fantastic Everett McGill (Twin Peaks, The People Under the Stairs) --- but can he get his sister and uncle to believe him?

Strangely enough, the film begins and ends with his sister narrating, but a much older version. She's maybe 12-14 in the film, but the voice sounds like someone who's at least 35, perhaps even up to 50 years old. This device is never explained: who is she speaking to, and why? It makes no narrative sense to have this voiceover, especially since it's just a bookend. I can only guess that it's a holdover from the novella that's lost in translation.

This is director Daniel Attias' first feature out of film school, and it's mostly really good, especially considering that fact. He's since gone on to be quite a prolific television director, having helmed episodes of popular shows like The Americans, Castle Rock, The Sopranos, and The Boys. There's a few noticable over-actors, but the film has a lot of heart. If it's been awhile since you've seen it, it's worth revisiting.

Like most of Scream Factory's releases, Silver Bullet has been lovingly restored --- at least I assume. It's not listed in the press release or the on the website what the transfer is, but it looks and sounds wonderful. I would assume that this is the best the film has looked since its release.

As for featurettes, I liked seeing McGill talk about the film. It's been awhile since I've seen him speak anywhere, and I do wish he was in more projects, as he's an underrated talent.

Perhaps it's time to terrorize a new generation of children? Out last week from Scream Factory, you can order and find out more on this collector's edition of Silver Bullet here.