Review: THE ADDAMS FAMILY Seeks a New Home in a New Age 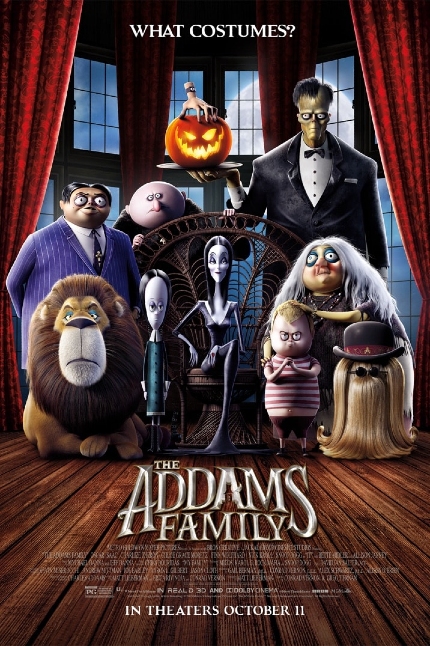 How do you update a family that doesn't want to change?

The Addams Family
The film opens in theaters throughout Canada and the U.S. on Friday, October 11, 2019, via United Artists Releasing. In the coming weeks, it will open in Europe, Latin America, Asia, and Australia.

Created by Charles Addams in a series of single-panel cartoons during the 1930s, and then broadened into a 30-minute, live-action sitcom during the 1960s, The Addams Family has been updated since then in a variety of formats on television and in feature films. (Addams continued to draw the cartoon, as well as many, many other works of art, until his death in 1988.)

Each update has endeavored to tailor the characters to fit into its era, and so its inherently fascinating for pop-culture observers to watch the latest version. Directed by Conrad Vernon and Greg Tiernan from a screenplay by Matt Lieberman and Pamela Pettler and a story by Lieberman and Erica Rivinoja, The Addams Family starts strong, creating a new origin story for Gomez (voiced by Oscar Isaac) and Morticia (voiced by Charlize Theron).

Chased out of town on their wedding day, they search for a new home and land in New Jersey. The mansion they purchase is perfect: huge, isolated, and creepy, complete with an incredible array of necessary items for any ghoulish individuals, including a pipe organ, on which faithful butler Lurch (Conrad Vernon) and the disembodied hand known as It (voice credited to Snoop Dogg) compose the snappy theme song.

Some 13 years later, the family has grown to include Wednesday (Chloë Grace Moretz) and her younger brother Pugsley (Finn Wolfhard). Soon, both Uncle Fester (Nick Kroll) and Grandma (Bette Midler) return to reunite with their kin, in anticipation of many more family members visiting for a special ceremony marking adulthood for young Pugsley.

But that's not all! When the clouds lift (for the first time in 13 years), the Addams Family discovers that a small town called Assimilation has sprung up in the valley below, led by construction developer / television personality Margeaux Needler (voiced by Allison Janney) and assisted by Glenn (Tituss Burgess). Whipped up by Margeaux's zeal for an ordinary small town to be inhabited exclusively by ordinary people with the money to buy the homes she has constructed, as well as her impending live television show about it all, the local citizens quickly turn against the Addams, practically picking up torches and pitchforks along the way.

The movie is as overstuffed as it sounds. The early sequences work best, as the core members of the family are introduced in their daily activities. Their morbid sensibilities are explored in a series of one-joke gags that feel very much like loving expansions of Charles Addams' original single-panel cartoons. The loving relationship between Gomez and Morticia only receives glancing notice from that point onward, as the story shifts focus to Wednesday's rebellious adolescent behavior and Pugsley's anxiety about what is expected of him as a young man.

Since the movie is aimed primarily at a young audience -- maybe 5 and up? -- it makes sense to pay more attention to the children than the adults. Comic sensibilities clash, however, whenever the story drifts toward Margeaux's misguided zeal and absentee parenting as a single mother of her early-teen daughter Parker (voiced by Elsie Fisher).

Characters continue to be introduced at an alarming speed, giving the 87-minute feature film the feeling of an extended pilot episode for a continuing television series. Indeed, that may be the future of The Addams Family, which rings fond bells of nostalgia as a dimly-remembered TV show for those of a certain generation, while parents of the intended audience may better recall the two feature-film adaptations from the 1990s.

The voice work is good; the actors capture the essence of their characters and are consistently, recognizably different in how they deliver their lines. That's more important here than perfect comic timing. (The exception is Nick Kroll, who spits out his wise-acre asides as Uncle Fester.) The supporting voice cast includes Martin Short, Catherine O'Hara, and Pom Klementieff (as suburban versions of the twins from The Shining).

Codirector Conrad Vernon provides several voices and undoubtedly draws upon his past experience; he and codirector Greg Tiernan previously made the raunchy Sausage Party. In this family-friend outing, they make clear distinctions between the rosy colors of the town below and the foreboding colors of the Addams family mansion and grounds, and populate the film appropriately with people and props.

Summing up: An excellent premise and a good start falters as the story proceeds toward its Great Moral Lesson; probably most enjoyable for younger audiences, who may all join together in song by the conclusion.