Undoubtedly a continuation of Matthew Barney's unique, modern-day myth-making process, the hypnotic images in 'Redoubt' have to be experienced on the big screen. 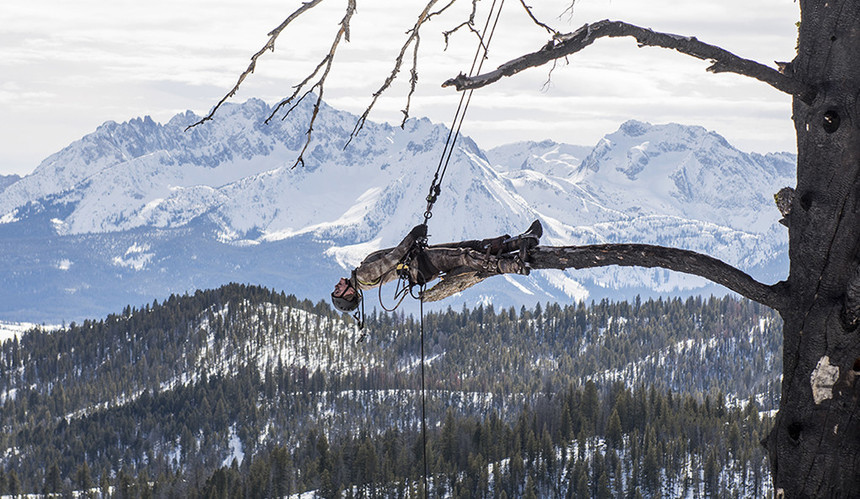 Redoubt brings artist Matthew Barney back into a feature film world after River of Fundament (2014), which was seven years in the making, culminating in a six-hour filmic experimentation with elements of performance, sculpture and opera. Like his breakthrough The Cremaster Cycle (2002), it is usually the case that his film(s) are an accumulation of gallery/museum installations and performances.

Redoubt, a relatively slight piece, clocking at 2 hours 14 minutes, is Barney’s newest project that he’s been working on for the last three years in the Sawtooth Mountains in Idaho, ending in sculpture and engraving on copper plate exhibition at Yale University Art Gallery, with the standalone film getting its two-week theatrical release at Film Forum in New York.

As usual with his film work, Redoubt is told wordlessly, but rather through visual, sound and dance. It tells a very loose interpretation of Diana and Actaeon in Ovid’s Metamorphoses. Anette Wachter, a real life long-range sharp shooter champion, decked in camouflage suits and weapons, plays Diana, the Roman goddess of hunting and nature. Her two companions, played by Eleanor Bauer, who is also the film’s choreographer and Laura Stokes, are first seen sleeping and waking up in the hammock far up upon the trees. Their agility and movements are that of woodland creatures rather than humans. They are on the hunt for wolves in the snowy Idaho wilderness. Their path crosses with a land manager (played by white bearded Barney himself) who lives in a trailer with his wife (K. J. Holmes, also a dancer) in the wilderness.

Once the land manager spots Diana and her companions, he tracks their movements with engravings on copper plates which his wife carefully dip in electrified bath for corrosive effects- I do not remember the etching process that well since art classes in college, so I may not be explaining this well. Sorry.

Eleanor Bauer and Laura Stokes reenactment of the hunting ritual are often playful and beautiful, especially the killing and skinning of an animal, even though their acts are often overshadowed by their immense and powerful surroundings.

Barney’s fetishization of objects is prevalent here as well – the series of hunting rifles, bows and arrows and clothing, all designed for the film. So is his penchant for texture – engravings submerged and corroding in the bath of acid, the night vision camera’s image of Wachter dancing, strewn carcasses of an animal killed and pecked out by other animals surrounded by pinkish snow.

So, does Acteon gets his comeuppances for snooping around Diana? His copper plates get shot at, leaving unintended but highly desirable patterns, his trailer ransacked by a pack of wolves. But they are all pretty minor for Barney standards. 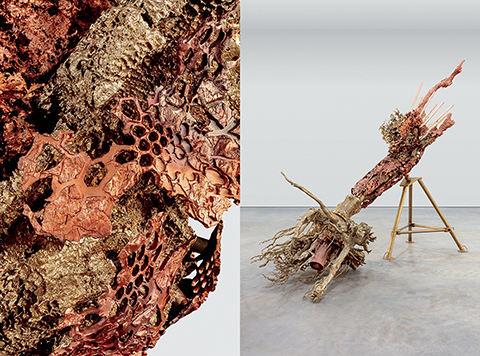 There are no bodily fluids flowing nor sexual provocation, nor elborate prosthetics, nor grand scale sculptural awe. Unlike painstaking, labor intensive production designs and mise-en-scenes of his previous projects, be it Cremaster or Drawing Restraint series, Redoubt relies heavily on its breathtaking snowy landscape of the Sawtooth Mountain Range. With aerial shots of frozen streams, woodland creatures and a little avalanche from the top of the mountains are all spectacular.

Barney goes for his nature shots to do the job for him rather than relying on his usually elaborate, labor intensive set ups. Still, Redoubt is undoubtedly a continuation of Barney’s unique modern day myth-making process. And its hypnotic images have to be experienced on the big screen.