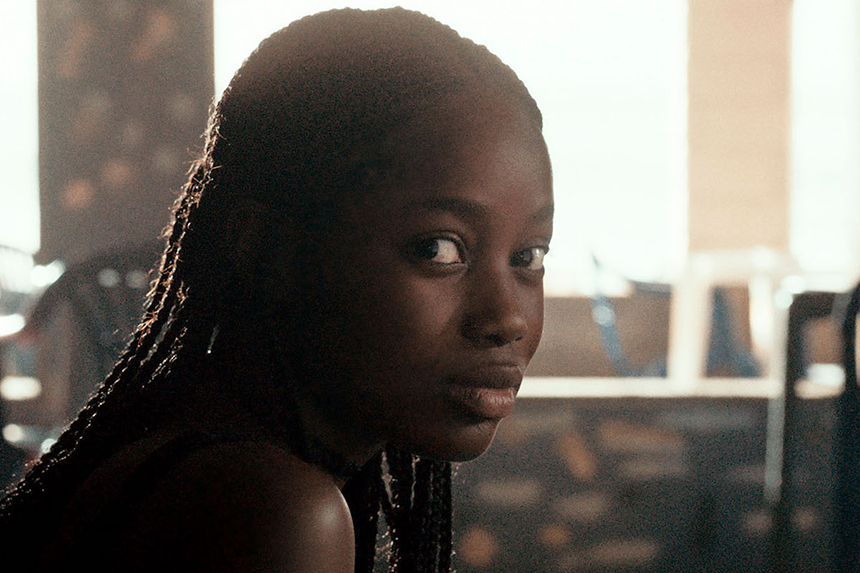 Mati Diop, better known as an actress for such films as 35 Shots of Rum, Simon Killer and Hermia & Helena, makes her feature directorial debut with dazzling Atlantics, based on her 2009 short of the same name. In her short, young Senegalese boys were shown discussing the pros and cons of leaving the country for Europe on the beach at night. The feature narrative version expands the premise with a whole narrative that shifts from the male to female perspective, as women are usually the ones left behind with the emotional trauma and economical hardships to deal with.

Atlantics starts with a young day laborer Souleiman (Traore) along with hundreds of others working on a futuristic glass tower in outskirts of Dakar. They eat and sleep together in a cramped bunk bed housing. Against the hypnotic, undulating ocean in the background, they go on about their back breaking work. The whole sequence has a documentary feel to it.

The workers haven't gotten paid for months and things are heating up at the payroll office. Souleiman is in love with Ada (Mame Bineta Sane), a young woman who's still living with her parents. Her conservative friend in hijab, Mariama (Mariama Gassama), chastise her for leading him on even though she is set to marry a local hotshot businessman Omar - arranged by their parents. Defiantly, she goes off to see Souleiman.

Even though clearly something is eating at him, Ada urges him to wait until they meet again at the local beach bar run by her friend. She sneaks out through the window at night to the bar, only to find out that Souleiman, along with many of his friends set sail to make a dangerous trip across the Atlantic to Spain. Then the news arrive of a capsized refugee boat. Ada is crestfallen.

Someone torches Ada's bridal bed on her wedding night. It prompts a police investigation. The main suspect is Souleiman since there are some witnesses who saw him at the wedding. Police detective Issa (Amadu Mbou), who is suffering from dizzy spell at night, is determined to solve this mystery. Convinced that Ada is protecting Souleiman, he interrogates her harshly and starts trailing her.

Then local girls, including Ada's friends start appearing at night with milky eyes at the house of shady construction manager Mr. N'Diaye, demanding the wages he owes to the workers. It's the spirits of the drowned boys taking over the bodies of girls temporarily every night, haunting the greedy man. The girls, found in various places in the morning, has no recollection of the events. Sometimes the possessed girls show up at the bar, asking for food since they are starving.

Expertly weaving the current headlines of marine disasters, which countless African refugees searching for better life meet their watery grave at the bottom Atlantic ocean, and the ghost story with the female solidarity twist, Atlantics has all the right ingredient to be a success story of a small art film breakthrough recalling Uncle Boonmee Who Can Recall His Past Lives. It's a melancholic romance film set in bustling Dakar, featuring the lives and hopes of young Senegalese we seldom get to see. It's also hopeful and lyrical yet pointy. And without a doubt, it is my choice for the best film of the year.

Do you feel this content is inappropriate or infringes upon your rights? Click here to report it, or see our DMCA policy.
BelgiumFranceIbrahima TraoréMama SanéMati DiopNew York Film Festival 2019Senegal