Montreal Nouveau 2019 Review: THE BODY REMEMBERS WHEN THE WORLD BROKE OPEN, The Struggle to Break the Cycle 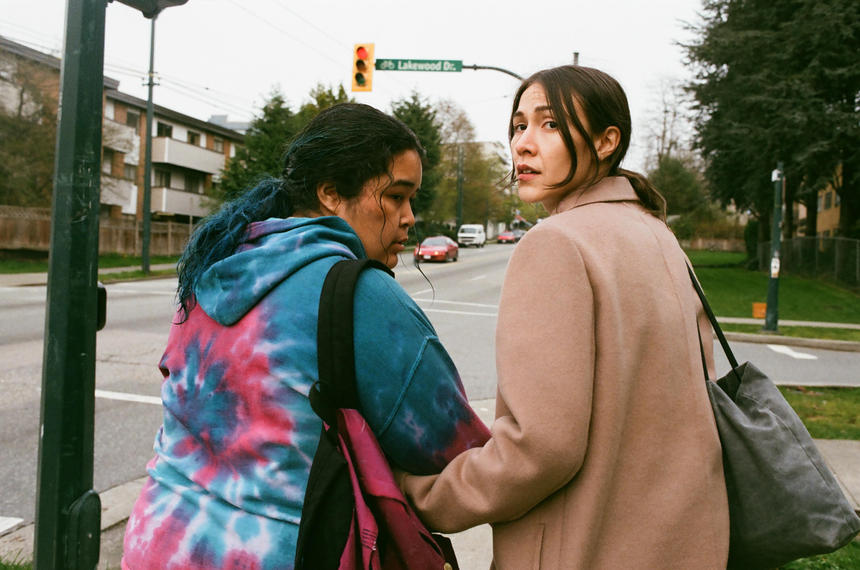 When I was a teenager, walking down a street one evening with my best friend at the time, we passed a doorway with a man and a woman. The man was blocking the woman. I heard her say, "Please just let me go" and him respond "No you fuckin' bitch". She was obviously scared and he was obviously violent. Then I was far enough past them to not hear anymore. I don't remember what I thought at the time, but I have thought about it since. Why didn't stop and help her? Why didn't I grab her and run? Why didn't I find the police? It's one of the few things in life that I regret not being able to change.

In Elle-Máijá Tailfeathers' and Kathleen Hepburn's intense and gut-wrenching drama The Body Remembers When the World Broke Open (the title is taken from an essay by indigenous poet Billy-Ray Belcourt and is possibly the best title of anything ever), a stranger does intervene to try to help a young woman in an abusive relationship. The results are both surprising and heartbreaking, as these two women, both indigenous yet with very differents backgrounds and lives, find that the the few things they have in common, might not be big enough to bridge the other chasmic divides.

We meet Rosie (Violet Nelson) as she takes a bus home; she's soon to have her first child and shares a small apartment with her boyfriend and his mother, in a situation that doesn't seem healthy. Áila (Tailfeathers) is introduced as she gets an IUD in a safe and seemingly supportive environment. These two scenes give us the introduction; the next scene, Áila finds Rosie barefoot on the sidewalk, running from her boyfriend who has just beaten her. Áila makes a quick decision to take Rosie home with her.

What follows is a real-time, one-long-take (or so it seemed) of Áila and Rosie together, as Áila tries to help, and Rosie wavering between resistance and acceptance. As stated, they might both be native women, but that is where the similarities end: Rosie has little contact with her family, lives in poverty, in an abusive relationship, with no means of financial support. Áila might have been raised on a reserve, but she is half Sami (indigenous Norwegian), lives in a nice apartment (presumably because of a well-paying job), in comfort and security.

This would seem to give Áila a moral and age-advantage; though she tries to sound and act normal for Rosie, there is a slight condescension in her 'I-know-best' tone that Rosie just isn't buying. Rosie has met too many people like this; people who may think they understand Rosie's situation, but really want to control her. And even if she is in a bad situation, what business is it of theirs?

With this single-take, single-camera, non-stop filming technique, the directors and cinematographer Norm Li (Beyond the Black Rainbow) make us watch every moment with these women, together and occasionally apart. We might see Rosie steal Áila's wallet, but we also see her crying and singing to her unborn child. Áila might pty forward a kind and strong front to Rosie, but her reaction to the situation suggests it's one she is intimately familiar with.It might seem like we are in the room with them, but there is a glass wall: we can see them, and their experiences hit us in the gut, but unless we've been there, we cannot fully comprehend it, and all we do is allow them to tell us their story, their way, and hopefully get some gleam of understanding. the situation and how answers are, in reality, not easy to find.

Make no mistake, this story, and more especially, these performances, will hit you like a punch to the gut. Tailfeathers plays Áila as a woman who has found herself treading on a knife's edge, wanting so desperately to shake Rosie out of her stupor to make her take a stand and leave her abusive boyfriend, but she must tread so carefully. But Nelson, as a non-professional actor, is a revelation; perhaps because she isn't professional: her natural understanding and empathy shines in a character that is frustrating, exacerbating, and evokes such pain and joy simultaneously that you'll be hard pressed to not jump into the screen and hold her and drag her away from her terrible choices.

The Body Remembers When The World Broke Open stands alongside many recent social realism dramas by the likes of Andrea Arnold and Lynne Ramsay, but also on its own as a work by indigenous people, both about abuse known to many women, and the specific difficulties faced by indigenous women in Canada, in a system desgined to leave them forgotten.