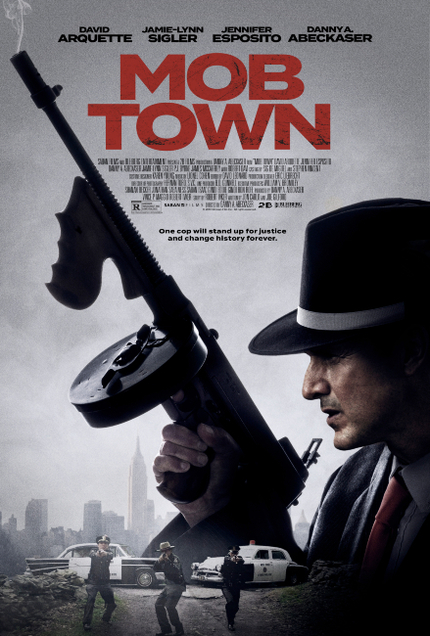 Maybe you've heard about the mob movie that's inspired by true events? Maybe you know that it draws inspiration from a book that details an unprecedented meeting of reputed Mafia leaders in upstate New York in 1957?

Well, this isn't Martin Scorsese's ambitious, sprawling The Irishman, opening later this week for a limited run in theaters. Instead, this is Mob Town, directed by Danny A. Abeckaser, which focuses entirely on the fateful meeting of crime-family leaders in the late 1950s.

The real events, covered in the book I Heard You Paint Houses -- which inspired The Irishman -- have also been covered in other books. In this version, the great Robert Davi plays crime boss Vito Genovese, who calls the meeting. The star of the show, however, is David Arquette as Sgt. Ed Croswell, who gets wind of the meeting and finds himself pursuing the case alone.

Jennifer Esposito, Jamie-Lynn Sigler (yup, The Sopranos), and director Danny A. Abeckaser himself also star. The film will open in theaters and On Demand/Digital on December 13, 2019. Watch the trailer below.

Do you feel this content is inappropriate or infringes upon your rights? Click here to report it, or see our DMCA policy.
Danny A. AbeckaserDavid ArquetteIndieJamie-Lynn SiglerJennifer Esposito