JAY AND SILENT BOB REBOOT Interview: Jason Mewes Looks Back On 25 Years Of The View Askewniverse

It’s been 25 years since a 24-year-old filmmaker from New Jersey, very much inspired by Richard Linklater’s Slacker, went on to direct his own low-budget, independent and dialogue-driven effort. Of course I’m talking about Kevin Smith and his debut feature-length film Clerks, which was, in its own right, important and inspiring for independent and comedic moviemaking (the Seth Rogen, Superbad generation can’t deny Smith’s influence).

It’s been a long, long journey since then for Smith and his acting and business partner Jason Mewes, who gave life to the iconic and hilarious duo of slackers and drug dealers Jay (Mewes) and Silent Bob (Smith). Clerks went on to become part of a shared universe, way before Marvel and its MCU: The View Askewniverse, alongside such films as Mallrats, Chasing Amy, Dogma and Jay and Silent Bob’s own movie, 2001’s Jay and Silent Bob Strike Back.

However, in recent years Smith has been focusing on other projects; he notoriously switched the comedy genre for a thriller back in 2011 with Red State, to later start developing his so-called True North trilogy with (the critically panned) Tusk and Yoga Hosers. Smith also suffered a heart attack in early 2018, almost losing his life at the age of 47, but fortunately he has recovered and now he's back to continue expanding his most famous cinematic universe.

As the title indicates, Jay and Silent Bob Reboot is, well, a reboot of the original Jay and Silent Bob solo effort from 18 years ago. It basically follows the same plot (the protagonists embark on a mission to stop another Hollywood film based on their comic book personas Bluntman and Chronic), but it certainly adds fresh ideas, being the most important one that Jay discovers that he has a teenage daughter (Milly, played by Smith’s own daughter Harley Quinn Smith).

In essence, Jay and Silent Bob Reboot is about celebrating 25 years of the View Askewniverse, with countless pop culture references and self-referential nods, as well as very special cameos for the fans (as you probably already know, Ben Affleck is back!). At the same time, Smith’s first View Askew live-action movie in 13 years (the previous one is 2006’s Clerks II) feels like a reflection on his own life, at a point in his career in which he seems to be an appreciative family man that enjoys the moment.

I talked about all of these themes with Smith’s old friend and Jay and Silent Bob Reboot star Jason Mewes (check out the full conversation below). 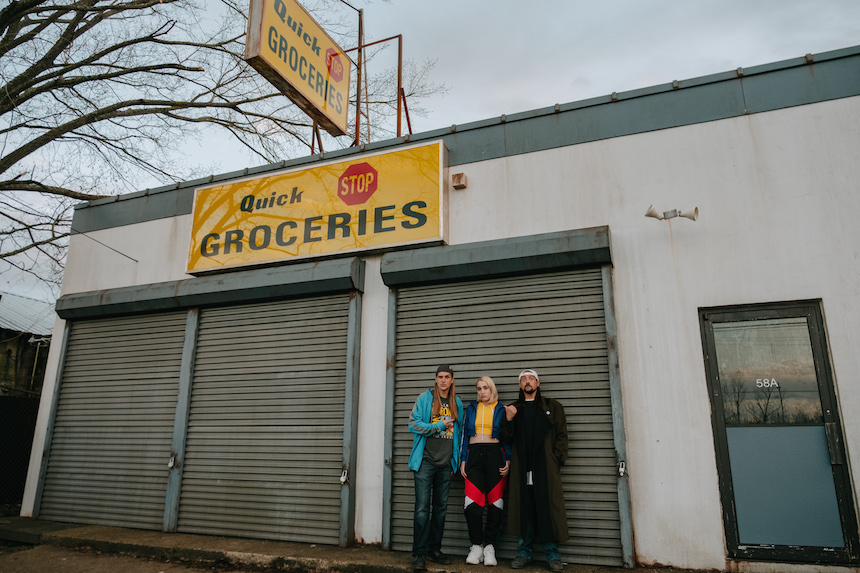 ScreenAnarchy: Since JAY AND SILENT BOB STRIKE BACK, 18 years ago, there was the concept of being self-referential, playing with meta-fiction. Now it’s not a secret that JAY AND SILENT BOB REBOOT is basically poking fun at the notion of doing the same movie again. What did you think when Kevin told you about this idea of making another Jay and Silent Bob film after so many years?

Jason Mewes: I was super excited about it, you know?

He had written a script for Clerks III, we were going to do Clerks III and we were super excited, nearly thought we had the money, we were at the location, we were going to film, all the pieces were coming together, but then it didn’t happen. It was a bummer. I was like “Kev, that didn’t happen… a Jay and Bob movie." I really want to make the movie, he really want to make the movie, we all knew it, we own the characters Jay and Bob so let’s do it.

I think as far as Kevin, it seemed like he really wanted to do like a warm-up, I think he wanted to do a few Askewniverse movies and not let Jay and Bob in it so people could get sort of warmed up with Jay and Bob before the full feature. Then he was going to do Mallrats 2 and Mallrats 2 didn’t happen, so at that point he was like “you know what? Maybe you’re right. I’m going to write a script.” And I was just super stoked because, again, not only have I been wanting to do a movie since Jay and Silent Bob Strike Back… a couple of years later, there was some bad years for me, but after a few years I really wanted to do another Jay and Bob movie. It didn’t seem like it could happen so when it finally happened it was perfect, I was super stoked about it.

We’ve known each other for 30 years. Since I’ve been sober, in the last five years we have been traveling, touring, with Jay & Silent Bob Get Old and all that, that we really have gotten to be like best friends and business partners. I was super stoked, it was a good time.

The movie I think is awesome, is fun, with all the reboot and remake and the jokes and the throwback to the old Jay and Silent Bob Strike Back. A big part of the movie is that Jay finds out he has a kid and there’s an adventure with Jay and Bob. It completely worked out perfect, I was super excited to get back into it and have some fun with Kevin and all the cast members that we’ve worked with over the years.

Certainly the big theme of the reboot is that now Jay has a daughter. How could you describe the new mindset of your character? He seems to be finally coming to terms with his own life…

I have a four-year-old daughter now so I had some experiences myself. It was a big help that Kevin’s daughter Harley Quinn was in the movie because I’ve known her since she was a baby and we have a relationship, she calls me uncle Jay. For me to act with her playing my daughter, it just really helped the whole thing. Again, at home I have a four-year-old, so the combination really made it a little bit easier for me to get into the mindset of it all. 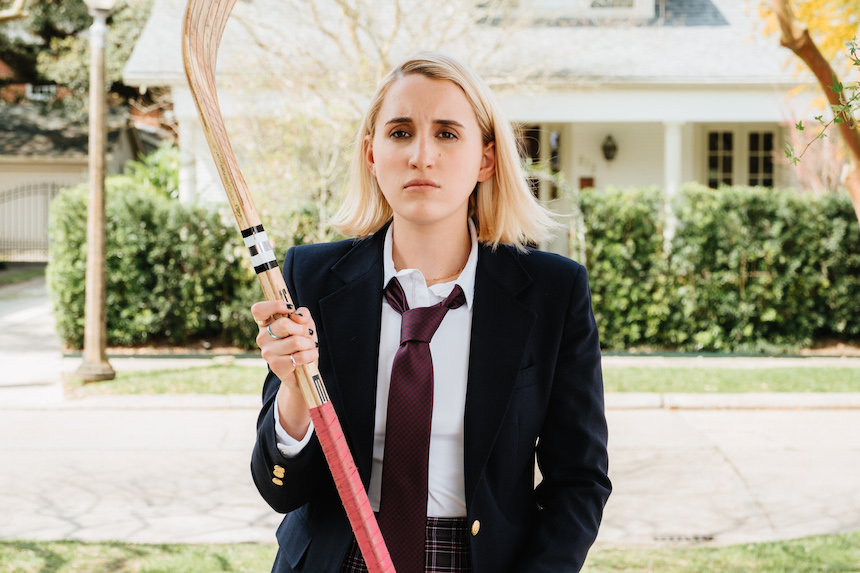 There are many nods to the whole View Askewniverse: CLERKS, CHASING AMY, DOGMA and, of course, the return of Ben Affleck. How emotional and/or fun was for you to shoot these scenes?

It was awesome. They day Ben came to the set, seriously Kevin and I hadn't seen him in forever, it was very nice to see him. There was some emotional moments. He was in Mallrats, so we’ve known him for [more than] 20 years, so to work with him and Shannon Elizabeth… I mean, lots of people, it really was a lot of fun but also like emotional at times and very surreal at times because it’s like “oh my goodness, I haven’t seen him in 15 years and here he is.”

It was really an awesome couple months of shooting, not to mention my wife [Jordan Monsanto] produced the movie, she’s been producing Kevin’s last two movies [Tusk and Yoga Hosers], she’s out in New Orleans and she brought my kid… it’s really a family affair, it’s very nice to be with my family, work with my family, Kevin, his daughter and his wife, and then not to mention people we’ve worked with in multiple movies over the years. It was great.

In JAY AND SILENT BOB REBOOT it does feel like Kevin is reflecting on his own life, probably after his heart attack. What was different this time when working with Kevin?

I definitely don’t see there’s a difference in the way he works, but it was just nice to see him like super happy to be there. He was there, really wanted to make this movie, like “this is all I want, if it’s the last thing I do, I just love to make Jay and Silent Bob Reboot”.

No one was getting paid a whole lot of money but everyone stuck around a little over time. Everybody was happy to be there, happy that they got to help Kevin make his movie that he really wanted to make. Kevin gave speeches about how happy he was about being there and making this movie and how important it was.

Even if the reboot is looking back at JAY AND SILENT BOB STRIKE BACK, it feels current, exploring themes like diversity in Hollywood, the Marvel [MCU] movies and even that scene with the KKK, the white supremacists. How do you feel about the fact that these characters from 25 years ago are now kind of adapting to our times?

I think Kevin did a great job. It’s nice because if you go back and watch the old Jay and Silent Bob Strike Back movie, there’s all these older jokes, one of the biggest ones is very nice to be able to switch it: I know I never thought way back in the day that one day I could say “yo, you were the bomb in Batman" to Ben. When we were doing Jay and Silent Bob Strike Back I would never thought that Ben Affleck, someone we were working with then and I said “you’re the bomb in Phantoms”, that someday I would be able to say “oh my god you should have stayed in Batman” for real. Kevin really was able to adapt the jokes at all the different things of today. He did a great job. 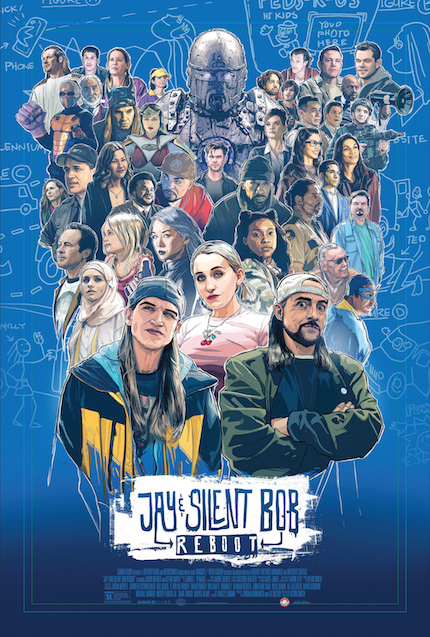 One of the notions that I took from the movie is that more important than your own legacy, your own films, is your family, your kids…

Yeah, I think Jay character and Silent Bob character sort of adapt over the years to what’s going on in our real lives.

I’m a dad, now it’s been over four years, she’s over four, so when shoot the movie she was three-and-a-half. Me and my wife have been married for 13 years. That’s what’s going on now, things change a bit.

Kevin and I, we’ve been friends for over 30 years… everything, everything is in that movie.

A good portion of the character is true to life. All the View Askew movies over the years have employed these stories that he has wanted to tell about his own life. Just like this one, the comedy is the comedy but a lot of that heart in it comes from real life.

Looking back, how do you feel about the fact that the audience keep embracing these movies after so many years?

It’s great. I didn’t plan on doing this film [Clerks], Kevin wrote the script and put Jay in there. Then he put me in Mallrats and after Mallrats I delivered pizzas and [worked in] construction. The point is, it’s not something I planned on doing, I just sort of fell into it. If you look at Clerks, Jay and Bob are not even on the poster because the studio was saying the movie is about the clerks and their girlfriends, not about the two guys hanging out front.

But what I’ve gotten over the years at the comic cons, the audience they come up and take pictures, I sign stuff and all that, is how many people have been to the Jay character like “hey, I have a friend just like Jay”, “I have this cousin, me and my cousin have a friendship like Jay and Silent Bob.” People can really relate to the Jay and Bob characters, whether they have a friend like that, a cousin like that. A lot of people can relate to a lot of the things that Kevin writes about, the characters Kevin makes up and writes about. That’s what I’ve gotten over the years.

Tickets for the October 15th & 17th nationwide release of Jay and Silent Bob Reboot are available at FathomEvents.com/Reboot