Venice 2019 Review: THE KING Lets Slip The Horrors Of War 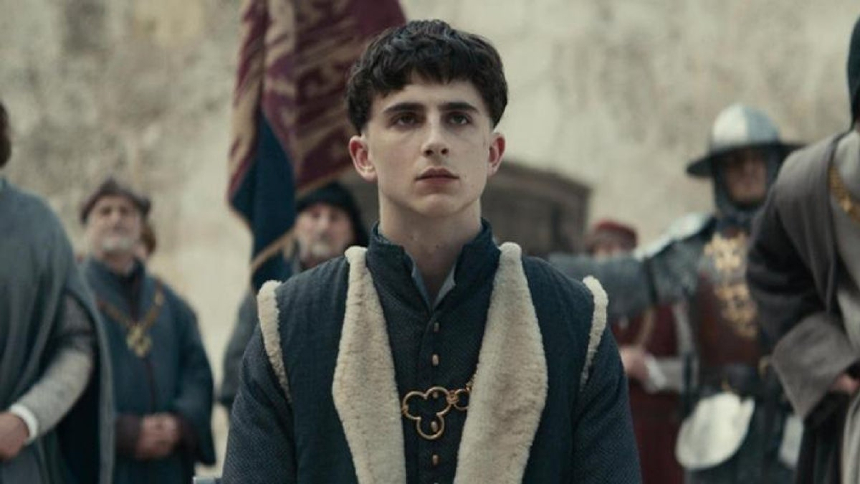 Director David Michôd teams up with actor and co-writer Joel Edgerton (a previous collaborator on Michôd's Animal Kingdom) for The King - a grimly sober, yet extremely convincing slice of Medieval life, which hacks its way into the court of Henry IV on the stage of 67th Venice Biennale.

Far removed from almost anything we might identify as Shakespearean, this period drama builds something much more comitted to modern cinematic realism, and erects a very different kind of throne for LGBT icon Timothée Chalamet to now be worshipped from. It's an unsteady throne, which precariously wobbles in the corner of The King's many spartan, fortified 15th-century rooms, filled with small, ancient windows that coldly stream in stark English light.

In these halls huddle contentious, swashbuckling lords and autocrats, who jostle with King Henry IV over their fears that his militant leadership has brought their world into dangerous civil unrest. On the field, these men are accustomed to expressing their discontents by clobbering each other over the head with swords at a moment's notice, and in court they brutishly batter and backstab each other with words.

This is not a story of the grotesque extravagance of, say, The Favourite, which we might now associate with later English monarchies. Instead, it is a cash-strapped world that is still made up of deeply divided factions, fervent superstitions and plentiful violent threats from both outside and inside England's borders. In short, a colonial shit storm that could collapse in on itself like a bloody souffle at any given moment.

The aristocracy we find in the eye of this storm is just as cold and unfeeling as always, only this time that callousness is born first and foremost from a fear of destruction at almost every turn. That's a fear that very much includes the perceived weaknesses of Chalamet's character Hal, who in an act of complete rejection of his father's war mongering has retreated into a near-constant Bacchanalia in London's poverty stricken Eastcheap with his partner in crime, John Falstaff.

These are the only moments in which The King really approaches a resemblance of Shakespeare's work, as a very dad bod-esque Falstaff (Edgerton) frolicks with Hal in boozey taverns and brothels. But this two-man alcoholic rebellion they embark upon is much more overtly packaged up than in Shakespeare's Henry V. Rather than being Shakespeare's symbolic process of redemption and a universal coming-of-age story - as you could interpret it - the constant drunkenness of Michôd's Hal is almost presented as the only sane political response to Henry IV's constant warring.

In a modern world that's (at least until quite recently) seemingly been fatigued with war, foreign interventionism and neo-colonialsm, this definitely seems like Michôd's attempt to make both the politics of Shakespeare's play and the 15th century directly relevant to today. As such, Chalamet's young, rebellious, floppy-haired prince becomes this sort of Corbynista or Bernie Sanders-esque voice of moderacy in a world that has lost its mind. Left with no choice but to be sucked into his father's wars, Hal repeatedly puts his neck on the line in the interest of avoiding further bloodshed and atrocities.

Thus begins an at times cringey road to redemption, which shows that steering clear of violence isn't always that simple and leads us all the way to the battle of Agincourt, which perhaps rather ridiculously prominently includes Shakespeare's fictional character Falstaff. This somewhat goes against the grain of The King's slavish attempts to abide by the realistic horrors of war, but fortunately Edgerton's performance does merit his being kept on. And of course as a co-writer, he gifts himself a healthy majority of the movie's funniest lines.

Nevertheless, the hyper-realistic scenes that detail the battle of Agincourt are also hands down the film's strongest, and also rather pleasingly pitch Chalamet and Edgerton against an excessively French performance by rival warring prince Robert Pattinson. These scenes are carried out with such remarkable accuracy (and presumably great expense), and they really give a sense of a scale and turmoil that well and truly does not rely on disappointing CGI.

If you're even slightly a military historian, then you'll be absolutely gripped by this muddy, rippling bloodbath. This battle scene is undeniably well done, and also opens up a whole new dimension to Chalamet that could potentially see him win over a significantly different legion of admirers. But even as the film decries the horrors and wastefulness of war, you can't suppress a little ringing alarm bell in the back of your head that the film is actually rather indulging a sort of martial wet dream.

You can't help but feel that The King panders to a sort of yearning for a manliness that must prove its magnanimity, and yet also be able to clobber someone over the head with a mace should it even remotely become necessary. And I'd go further than that. I'd go as far as to say that the way The King encourages you to invest in the English victory at Agincourt borders on jingoistic at times, even if one of the film's final blows does serve to undermine this.

As the title might lead you to believe, the film is also epically male-centric, and won't be getting anywhere near an F-Rating of Bechdel Test pass even with an ambitiously outstretched billhook any time soon. Being yet another feature dripping with Michôd's continued, blood-soaked obsession with the masculine crisis, I would actually say the filmmakers' unyeilding mission to stay true to the machismo of war ultimately left it feeling thematically a bit flat, for all its visual perfection.

The King is certainly always earnestly straight-faced, and deeply committed to getting its performances, violence, costumes and mise-en-scène utterly right. And unlike Justin Kurzel's red-hot second feature Macbeth, straying far from Shakespeare's verses has also certainly allowed Michôd and Edgerton to create something far more accessible or mainstream, with a number of funny/anachronistic turns throughout. That said, the writers have definitely been similarly studious about how they create a dialogue that feels deeply rooted in the 15th century.

Nevertheless, I can't help but have a final verdict that The King falls far short of Kurzel's masterly Macbeth, both thematically and stylistically. I think a lot of people (maybe even most people) will enjoy the cinematic splendors of this film, I'm just not sure I did. Nor am I sure that I was comfortable with some of the more immature sensations it seemed to promote under its time-travelling surface.

More about The King