Toronto 2019 Review: In JALLIKATTU, The Line Between Man And Beast Dissolves 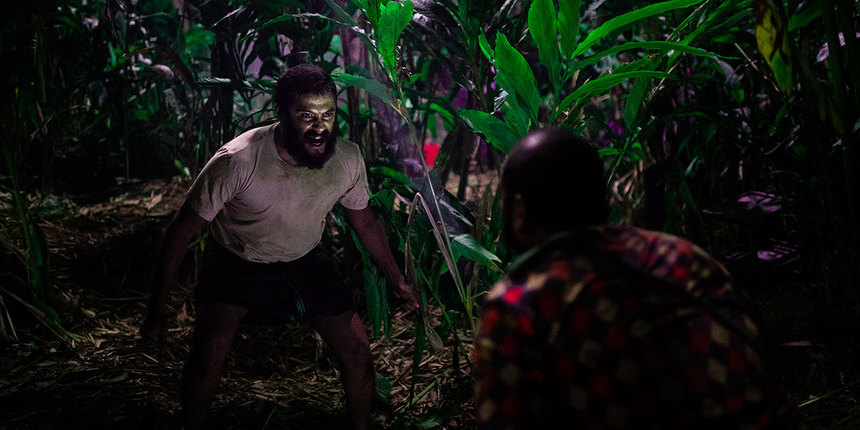 A small village in the forests of rural Kerala is about to face down a terrifying beast when a buffalo bound for slaughter escapes and wreaks havoc on its lanes and the surrounding farmland. The seventh feature from Indian filmmaker Lijo Jose Pellissery, Jallikattu explores the chaos that erupts when the men of the village try to corral this force of nature and instead end up blurring the line between what is civilized and what is bestial as the situation grows increasingly savage.

When news of the escape reaches outside of the village, neighboring towns send goon squads to attempt to rein in the buffalo in the hopes that they can claim the beast and its bounty for themselves. Meanwhile, interpersonal politics complicate the struggle at home, turning friends into foes and reigniting old feuds in a raging storm of unchecked machismo. As much a wild action film as an exploration of rural masculinity run amok, Jallikattu takes its audience on an incredible visceral and emotional journey over the course of 90 blood, sweat, and tear-soaked minutes that will leave viewers gasping for breath by the time it reaches its incredible conclusion.

Pellissery has been quietly making some of India's most interesting films for the last decade, with his most recent two, 2016's Angamaly Diaries and 2018's Ee. Ma. Yau., finally breaking through to pan-Indian audiences stunned into awe by his ability to write thoughtful characters and somehow manage to incorporate them into wildly entertaining visual free-for-alls that never lose a sense of focus, in spite of his fondness for onscreen chaos. With Jallikattu, he hones that ability to dissect the tribal and communal bonds in a small Indian village, his preferred and native milieu, through the way they respond to this crisis, and the result is exhilarating.

Deftly dissecting a kind of primal masculinity in gruesome detail, Jallikattu watches several competing hordes of men and the way in which their blind devotion to victory over the beast leads them each into their own private hells. A local bone scraper, played by Angamaly Diaries lead Antony Varghese, proves to be as central of a character as any in this wild ensemble piece, driven by lust, envy, and a burning desire to stand at the apex of this village's manhood.

Unfortunately for him, nearly every other able-bodied man in shouting distance is after the same goal, and they are all willing to cross any boundaries of civility to do it. As the town descends into savagery, the buffalo becomes more of a totem than anything else, and the village's true colors bleed all over the soil.

The film opens with an intricately edited visualization of the village's natural morning rhythms. The background score by Prashant Pillai perfectly reflects both the clockwork sameness of the daily routine and the simmering tension beneath these actions, often performed by rote. The music plays a huge part in directing the flow of the film, guiding the audience from one perspective to another while binding the experience together as a whole, even as different groups of cattle wranglers frequently take very different approaches in their hunt for the escapee.

Equally impressive as the aural experience is Pellissery's almost preternatural ability to capture and convey chaos on screen. What begins as a local problem attracts greedy wannabes from all over the region, leading to massive sequences in which hundreds of men hunt the beast in exquisitely choreographed and photographed action sequences that provide a potent immediacy,  as well as a surprisingly artful edge to the film.

Cinematographer Girish Gangadharan previously shot Angamaly Diaries, which famously ends with a single-take 11-minute tracking shot that ends in a spectacular explosion. In Jallikattu, he brings a more deliberate sense of framing to the equation. Expanding on his demonstrated ability to capture action both large (Angamaly Diaries) and small (2018 prison break film, Swathanthryam Ardharathriyil), Gangadharan here explores the forests of Kerala with a painter's eye, lovingly framing scenes of chaos and destruction with a stillness and confidence that truly puts Jallikattu on another level beyond what we've seen from this region before.

Between its scathing indictment of raging testosterone left unchecked in India's rural jungles and the purposeful and mesmerizing execution of its incredible action, Jallikattu is one of the year's biggest discoveries. There aren't many filmmakers like Pellissery in the world, and Jallikattu is about to let the whole world know what they've been missing.