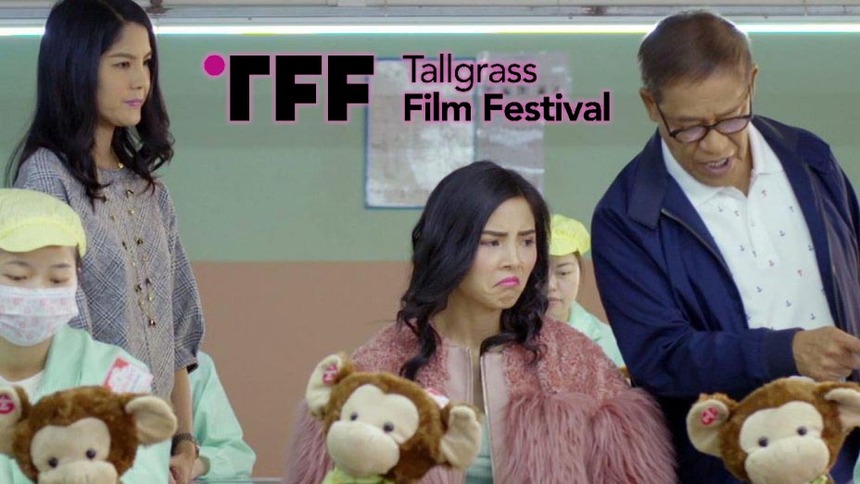 Wichita's indie-filled celebration of cinema is hosting its 17th edition of the Tallgrass Film Festival in a few weeks and their full lineup is packed with goodness. A leader in the regional festival scene for bringing independent films to the Midwest, this year's festival is another great mix of festival faves and smaller films that easily slip through the cracks. We'll have plenty more to come as the festival start date of October 16 approaches, but until then, the full press release and lineup is below.

The 17th Annual Tallgrass Film Festival announces lineup of feature films including Opening Night Gala selection of James Sweeney’s STRAIGHT UP, Stubbornly Independent presentation of Haroula Rose’s ONCE UPON A RIVER and Closing Night Gala choice of Kirill Mikhanovsky’s GIVE ME LIBERTY

Wichita, KS (September 17, 2019) – The 17th Annual Tallgrass International Film Festival presented by Consolidated Equities Trust (October 16-20) today announced the feature film lineup for this year’s edition with a full roster of Gala selections including; James Sweeney’s STRAIGHT UP (Opening Night Gala), Haroula Rose’s ONCE UPON A RIVER (Stubbornly Independent Centerpiece Gala), and Kirill Mikhanovsky’s GIVE ME LIBERTY. (Closing Night Gala) The Opening Night Gala will feature Sweeney’s festival favorite STRAIGHT UP on Wednesday, October 18, with a Q&A with the Sweeney, the Writer/Director/ Star, to follow the screening.

The winner of the Jake Euker Stubbornly Independent competition, presented by Kansas Strong is Harold Rose’s ONCE UPON A RIVER. The film will screen on Friday, October 18 at the Scottish Rite Theater.

The Saturday night Ad Astra presentation will include an award honoring comedian and director Bobcat Goldthwait, as well as a conversation on film and his career hosted by Director of Programming Nick Pope. The presentation is followed by a tenth anniversary screening of Goldthwait’s 2009 film WORLD’S GREATEST DAD. The ceremony will take place at 7:45 p.m. at the Orpheum Theatre.

In addition to the ceremony, Goldthwait will be present to provide the introduction of his 1991 dark comedy SHAKES THE CLOWN, presented as a late night showcase at the Scottish Rite Theater at 11 p.m. on Saturday, October 19th.

This year’s DOXX Spotlight screening, showcasing the incredible real life stories being told by women documentary filmmakers will be Katie Wiatt’s FLY LIKE A GIRL. The DOXX awards ceremony & screening will take place on Sunday, October 20 at 3 p.m.

OPENING NIGHT GALA SELECTION
Straight Up
Director: James Sweeney
Narrative | USA | 2019 | 1 hr 35 min
Todd and Rory are intellectual soul mates. He might be gay. She might not care. A romantic-comedy drama with a twist; a love story without the thrill of copulation.

CLOSING NIGHT GALA SELECTION
Give Me Liberty
Director: Kirill Mikhanovsky
Narrative | USA | 2018 | 1 hr 59 min
When a riot breaks out in Milwaukee, medical transport driver Vic is torn between his promise to get his relatives, a group of elderly Russians, to a funeral and his desire to help Tracy, a headstrong young black woman in a wheelchair

JAKE EUKER STUBBORNLY INDEPENDENT GALA SELECTION
Presented by Kansas Strong
Once Upon A River
Director: Haroula Rose
Narrative | USA | 2019 | 1 hr 30 min
It's 1978 and Margo Crane, a 15 year old part Native teen, must take to the Stark River on an odyssey. Akin to Huck Finn, this is a heroine like no other. Based on the best selling novel ONCE UPON A RIVER by Bonnie Jo Campbell.

DOXX SPOTLIGHT SELECTION
Presented by Greteman Group
Fly Like A Girl
Director: Katie McEntire Wiatt
Documentary | USA | 2018 | 1 hr 25 min
Fly Like A Girl is more than just a film. It’s a movement of young girls and women relentlessly pursuing their passion for aviation. A field currently dominated by men.

Burning Cane
Director: Phillip Youmans
Narrative | USA | 2019 | 1 hr 28 min
A worried mother caring for her mange-ridden family dog; her unemployed, alcoholic son and the wife who supports him; and a preacher whose wife’s recent death has pushed him toward the bottle are a few of the characters who make up the beautifully rich world of Southeastern Louisiana.

Clementine
Director: Lara Jean Gallagher
Narrative | USA | 2019 | 1 hr 33 min
Reeling from a one-sided breakup, heartbroken Karen breaks into her ex's lake house. There, she strikes up a complicated relationship with provocative younger woman Lana.
Come As You Are

Director: Richard Wong
Narrative | USA | 2019 | 1 hr 46 min
Inspired by a true story - three young men with disabilities flee their overbearing parents for a road trip to a brothel in Montreal that caters to people with special needs, in order to lose their virginity and embrace their independence.

First Love
Director: Takashi Miike
Narrative | Japan | 2019 | 1 hr 48 min
The film is the prolific auteur, Takashi Miike, at his most fun and anarchic, a noirtinged yakuza film blending genres in the story of a young boxer and a call girl, who fall passionately in love while getting innocently caught up in a drugsmuggling scheme over the course of one night in Tokyo.

Go Back To China
Director: Emily Ting
Narrative | USA/China | 2019 | 1 hr 35 min
After spoiled rich girl Sasha Li blows through half of her trust fund, she is cut off by her father and forced to go back to China and work for the family toy business.

Hudson
Director: Sean Cunningham
Narrative | USA | 2018 | 1 hr 15 min
A man embarks on a trip with his estranged cousin Hudson to spread his late mother's ashes. They meet an unusual woman along the way and their simple road trip turns into a dysfunctional adventure.

In Fabric
Director: Peter Stickland
Narrative | UK | 2018 | 1 hr 58 min
A lonely woman (Marianne Jean-Baptiste), recently separated from her husband, visits a bewitching London department store in search of a dress that will transform her life. She’s fitted with a perfectly flattering, artery-red gown—which, in time, will come to unleash a malevolent curse and unstoppable evil, threatening everyone who comes into its path.

International Falls
Director: Amber McGinnis
Narrative | USA | 2019 | 1 hr 32 min
A woman stuck in a small, snowbound border town has dreams of doing comedy when she meets a washed up, burned out comedian with dreams of doing anything else.

Ms. Purple
Director: Justin Chon
Narrative | USA | 2018 | 1 hr 27 min
A young woman who works as a karaoke hostess in Koreatown reconnects with her estranged brother in the final days of their father's life.

Once Upon A River
Director: Haroula Rose
Narrative | USA | 2019 | 1 hr 30 min
It's 1978 and Margo Crane, a 15 year old part Native teen, must take to the Stark River on an odyssey. Akin to Huck Finn, this is a heroine like no other. Based on the bestselling novel ONCE UPON A RIVER by Bonnie Jo Campbell.

Parasite
Director: Bong Joon-Ho
Narrative | South Korea | 2019 | 2 hr 12 min
All unemployed, Ki-taek's family takes a peculiar interest in the wealthy and glamorous Parks for their livelihood until they get entangled in an unexpected incident.

Saint Frances
Director: Alex Thompson
Narrative | USA | 2019 | 1 hr 38 min
At the start of the summer, Bridget has an abortion just as she lands a much needed job in an affluent Chicago suburb - nannying a six-year old.

Stars By The Pound
Director: Marie-Sophie Chambon
Narrative | France | 2018 | 1 hr 28 min
Lois has a dream: to be an astronaut. The adults in her life cannot see beyond her weight and encourage her to seek a career closer to terra firma. When Lois takes drastic measures in an attempt to become someone she’s not, she meets three girls who also struggle with accepting themselves.

World’s Greatest Dad
Director: Bobcat Goldthwait
Narrative | USA | 2009 | 1 hr 39 min
When his son's body is found in a humiliating accident, a lonely high school teacher inadvertently attracts an overwhelming amount of community and media attention after covering up the truth with a phony suicide note.

Shakes The Clown
Director: Bobcat Goldthwait
Narrative | USA | 1991 | 1 hr 27 min
Shakes plods about his duties as party clown, and uses all of his free time getting seriously drunk. Binky, another clown, wins the spot on a local kiddie show, which depresses Shakes even more, and his boss threatens him with unemployment if he can't get his act under control. When someone murders Shakes' boss and makes it look like Shakes did it, he goes undercover, posing as a hated mime, and tries to find information that will clear his name.

Always In Season
Director: Jacqueline Olive
Documentary | USA | 2018 | 1 hr 28 min
When 17-year-old Lennon Lacy is found hanging from a swing set in rural North Carolina in 2014, his mother’s search for justice and reconciliation begins while the trauma of more than a century of lynching African Americans bleeds into the present.

I Am Human
Director: Taryn Southern & Elena Gaby
Documentary | USA | 2019 | 1 hr 30 min
Meet the world's first 'cyborgs' - a quadriplegic, a blind man, an amputee, a biohacker, and a woman with Parkinson's - the scientists who help them, and one entrepreneur who will stop at nothing on his quest to unlock the brain.

Midnight Traveler
Director: Hassan Fazili
Documentary | Qatar/USA/UK/Canada | 2018 | 1 hr 27 min
When the Taliban puts a bounty on Afghan director Hassan Fazili’s head, he is forced to flee with his wife and two young daughters. Capturing their uncertain journey, Fazili shows firsthand the dangers facing refugees seeking asylum and the love shared between a family on the run.

Recorder: The Marion Stokes Project
Director: Matt Wolf
Documentary | USA | 2019 | 1 hr 28 min
Marion Stokes secretly recorded television 24 hours a day for 30 years from 1975 until her death in 2012. For Marion taping was a form of activism to seek the truth, and she believed that a comprehensive archive of the media would be invaluable for future generations.

Red, White and Wasted
Director: Sam B. Jones & Andrei Bowden-Schwartz
Documentary | USA | 2019 | 1 hr 29 min
An unapologetic immersion into Florida's redneck mudding culture. Video Pat is a mudding enthusiast who must question his passion, and maybe his entire way of life, when the last mudhole in Orlando is shut down.

Trixie Mattel: Moving Parts
Director: Nick Zeig-Owens
Documentary | USA | 2019 | 1 hr 32 min
Trixie charmed audiences and judges as winner of RuPaul's Drag Race All Stars. But the grind of performing and the pressure of the title proves that heavy is the head that wears the tiara.

What She Said: The Art Of Pauline Kael
Director: Rob Garver
Documentary | USA | 2018 | 1 hr 35 min
The portrait of the work of controversial film critic Pauline Kael and her influence on the male-dominated worlds of cinema and film criticism.